In the words of the great Gus Johnson: Here. We. Go.

The NCAA Tournament is officially back with the first round tipping off today at Noon ET. That means you only have a few hours to finish those picks and submit your brackets for a chance to win $500. (Deadline: Noon ET)

The winners of The First Four have cut the field from 68 to 64 (highlights at the bottom). It’s time to dance.

As you settle in for three weeks of games ahead, it might help to know where (and how) the NCAA is pulling off a bubble unlike any other in sports. The headquarters — located in downtown Indianapolis — sits in a small 10-mile radius that includes four team hotels and four of the largest sports arenas in Indiana. Outside that bubble are two additional sites where teams can bus to and from, but remain safe. As the tournament progresses, only the four Indy-based sites will be used as the number of teams starts to shrink.

Home of the Purdue Boilermakers

Home of the Indiana Hoosiers

Home of the Butler Bulldogs

Home of the IUPUI Jaguars

Home of the Indiana Pacers

Home of the Indianapolis Colts

The Significance of Seeding 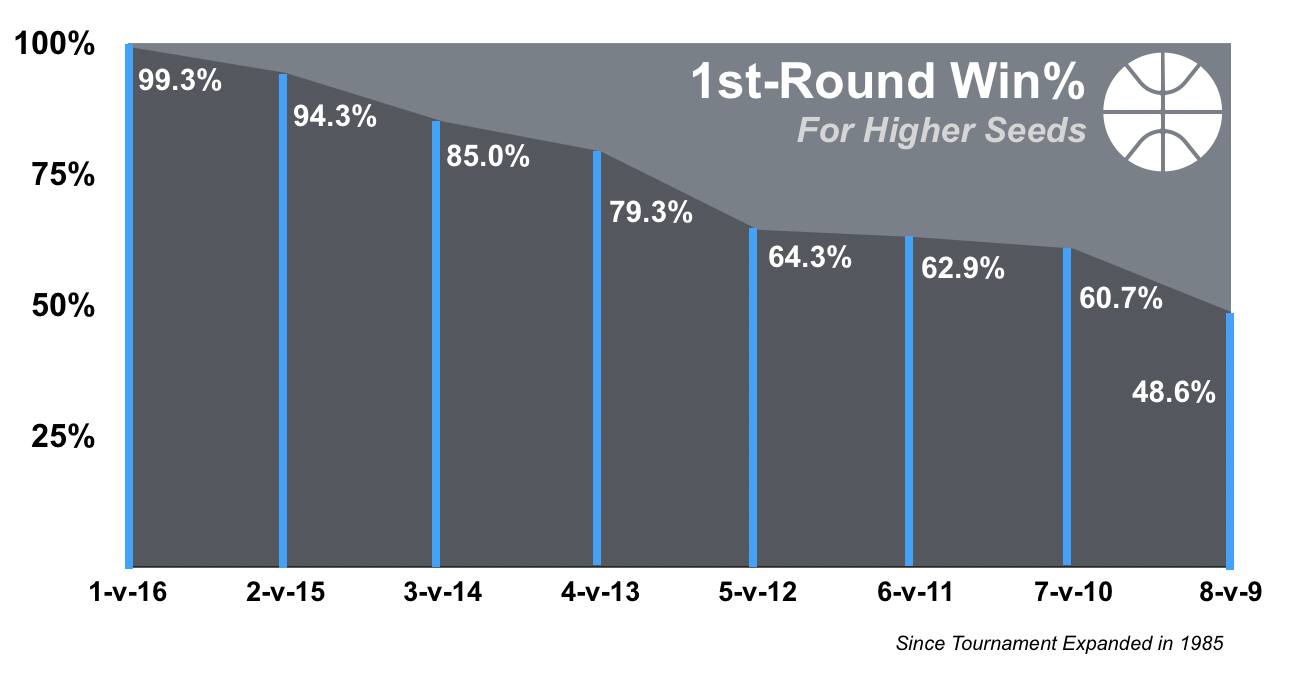 The Historical Implications of Where Your Team is Seeded

Once the ball is tipped, you can throw out the numbers. They don’t matter anymore. But when it comes to predicting your bracket or your team’s odds to advance? History tells all.

It took 33 years since the NCAA Tournament format was expanded in 1985 for a 16-seed to upset a 1-seed (UMBC, 2018). During that time, teams seeded on the 2, 3 and 4-lines had a consistently successful showing in the opening-round games, winning at a near 90-percent clip, combined. But that’s where the “safe bets” end. Seeds 5 through 8 are frequent victims of the upset. There’s a steep slope in success between being a 4-seed and a 5-seed.

Deep Sleepers: In 9 of the last 10 NCAA Tournaments, a team seeded 5 or lower has reached the Final Four.

Only 4 other conferences have a tourney record above .500 (Conference USA, Horizon League, West Coast Conference, and Atlantic 10).

These historical nuggets aren’t guarantees. And this year’s NCAA Tournament is not like any we’ve seen before. Make your picks with caution, but time is running out. 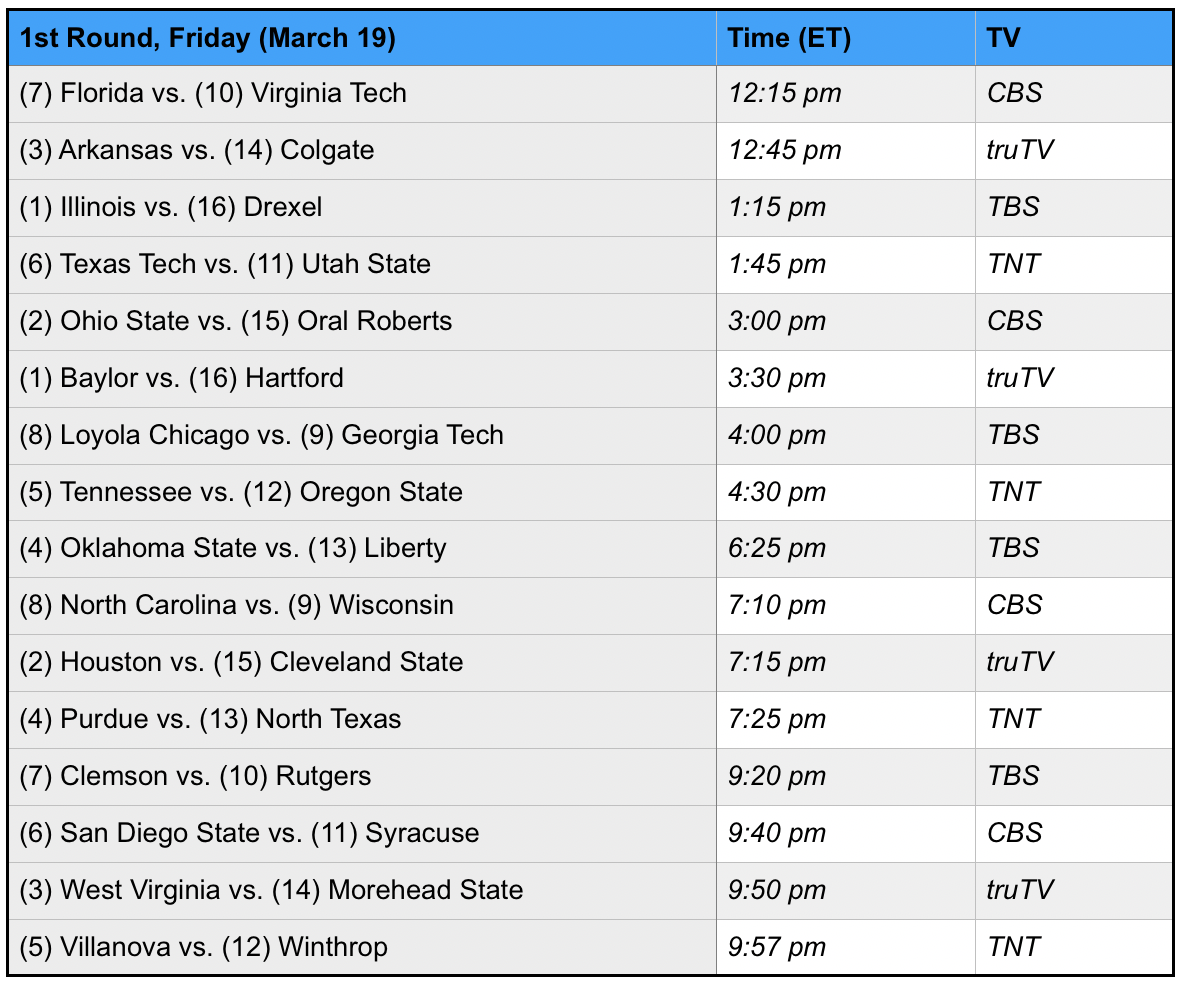 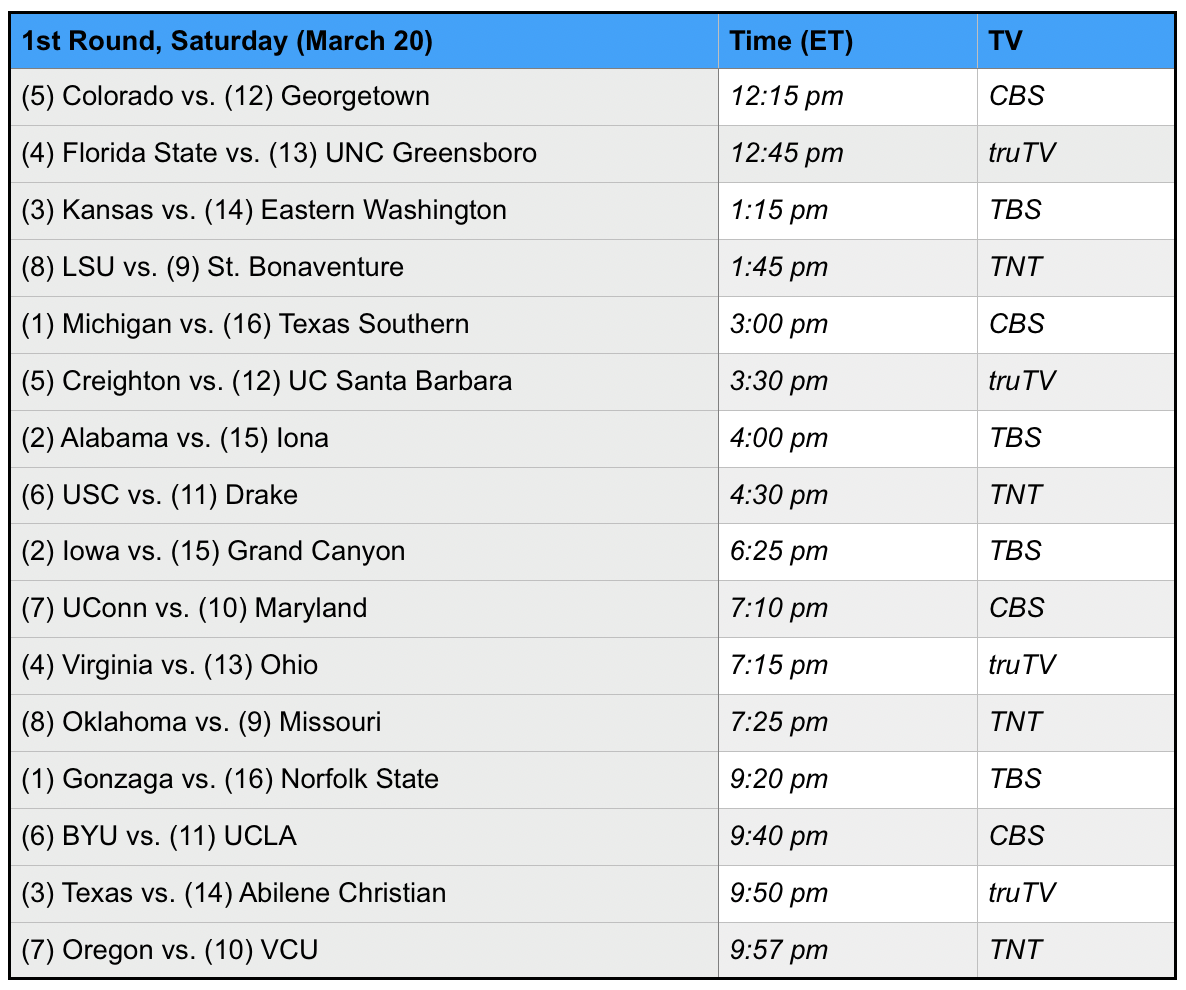 The Game Schedule: Upset Alerts & Players to Watch in Round 1

The schedule looks similar to past years, but with a Friday start. The rolling early games begin about 30 minutes apart before the night-caps go four-at-a-time.

Upset Alerts: Keep an eye on (14) Colgate in the early matchup. The Raiders are 14-1 this season and they can score it with pace. So can their opponent, (3) Arkansas. First to 100 wins. (12) Winthrop is also a 1-loss team taking on (5) Villanova without star point guard Collin Gillespie, and Patrick Ewing’s (12) Georgetown team is as hot as anyone coming off a Big East title run.

Key Players: Cade Cunningham from (4) Oklahoma State might be the best player in the tourney, and his Cowboys got snubbed with a lowley 4-seed. They might have a chip on their shoulder. (6) USC’s Evan Mobley could also make some noise and carry a lower seed deep into the shadows of Indy. The rest of the superstars on the 1- or 2-lines shouldn’t have trouble surviving the weekend, so it might be your last chance to watch Cunningham and Mobley on the college stage.

Ways to Watch: Fans should have no problem tuning in. The NCAA March Madness Live app lets you watch any game for free, but streaming services like Hulu, YouTube TV, Paramount+ and fuboTV also carry CBS and Turner.

That’s all the March Madness chatter for today. Let’s get caught up on the First Four, then it’s time to dance! 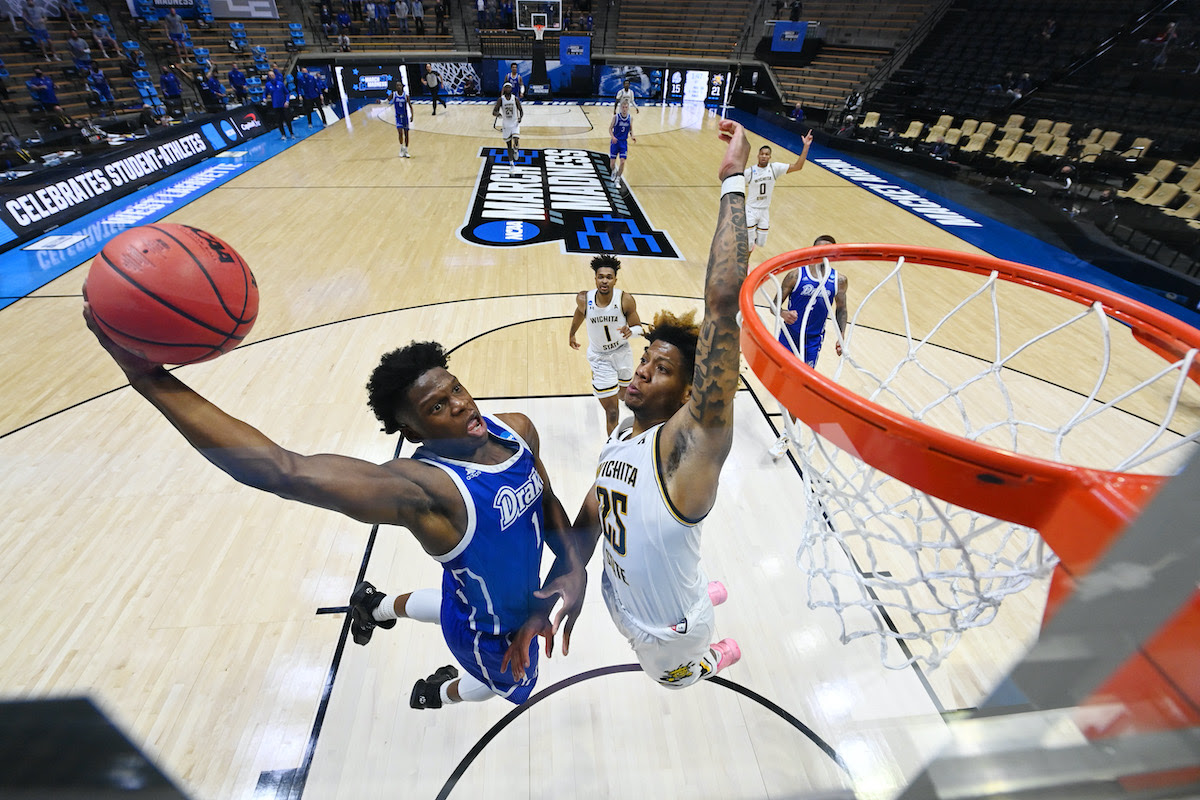 Two games decided by one point AND an overtime thriller? If Thursday’s First Four was a preview of what’s to come, we should all be excited.

Welcome back, Bulldogs! Drake University from the Missouri Valley Conference got their first NCAA Tournament win in 50 years last night by holding off Wichita State (53-52). The Shockers hit a 3-pointer with seconds left, and got a good look at a game-winner as time expired.

The Bruins used a late surge to overcome a double-digit deficit and push Michigan State into overtime before taking over (86-80, OT). Jaime Jaquez Jr. and Johnny Juzang combined for 50 points for UCLA. They ended the season on four-game losing streak, but they’re moving on.

The Tigers from the SWAC also needed a second-half spark to take down Mount St. Mary’s (60-52). Texas Southern outscored the Mountaineers 40-22 in the 2nd. They’ll get #1 Michigan on Saturday.

Norfolk State almost made it four straight blown leads in the First Four, but the Spartans held off App. State (54-53) despite scoring just 18 points in the second half. Remember Norfolk State? They upset 2-seed Missouri as a 15-seed in 2012. Next up: #1 Gonzaga.

WR Will Fuller Heads to Dolphins on 1-Year Deal

It’s tourney time! The Madness begins today at Noon ET. Your bracket is about to sink or swim. Grab a life raft, just in case. We’ll recap every weekend highlight on Monday. Enjoy!