Welcome back. Nothing like a highlight-heavy, mid-week Sportsletter. The A’s (11), Knicks (8) and Golden Knights (8) are riding epic win streaks. We’ve got all the moments, plus the greatest buzzer-beater of all-time… Almost.

All Aboard the A’s Train 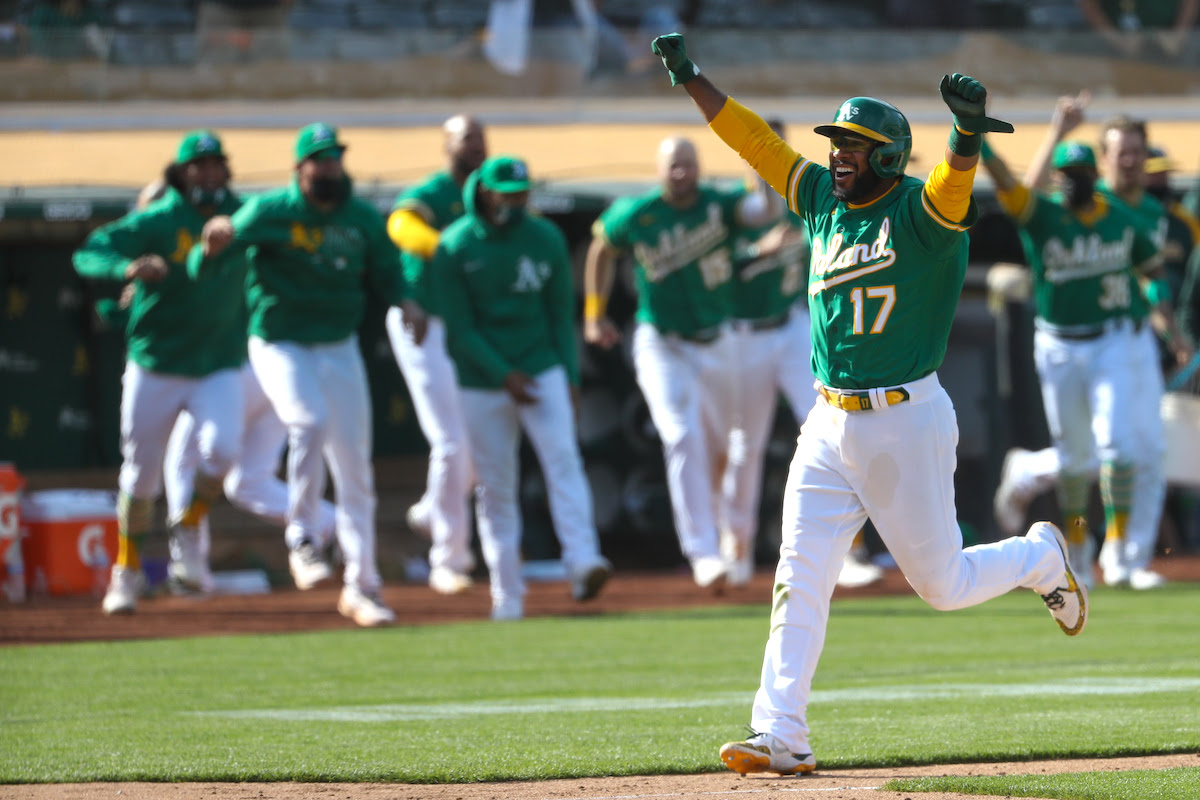 I’m not sure where to begin in describing the first month of the Oakland Athletics’ 2021 season. Their 1-7 start had them dead last in MLB, and now they can’t be beat. The A’s won their 11th straight game on Wednesday by beating the Twins (13-12, 10 innings) courtesy of back-to-back infield errors. The second error came off Ramon Laureano’s hopper that plated Tony Kemp and Elvis Andrus for the walk-off. Oakland tallied three unearned runs in the bottom of the 10th. 1B Matt Olson (3-for-5, 2 HRs, 3 RBIs) led the charge at the plate, and the Oakland streak continues.

Cubs Go Crushing: The Cubs caught fire on Wednesday to beat the Mets (16-4) thanks to a seven-run fourth inning and a Javier Baez grand slam in the sixth.

Knapp Time: The Phillies avoided a sweep against the Giants yesterday afternoon thanks to Andrew Knapp’s walk-off single to left that plated Bryce Harper for the win (6-5).

Salvador the Savior: The Royals stunned the Rays (9-8) on Wednesday night thanks Salvador Perez’s walk-off single down the left-field line. The bullet shot scored Nicky Lopez from third base.

The Shot That (Almost) Broke Basketball 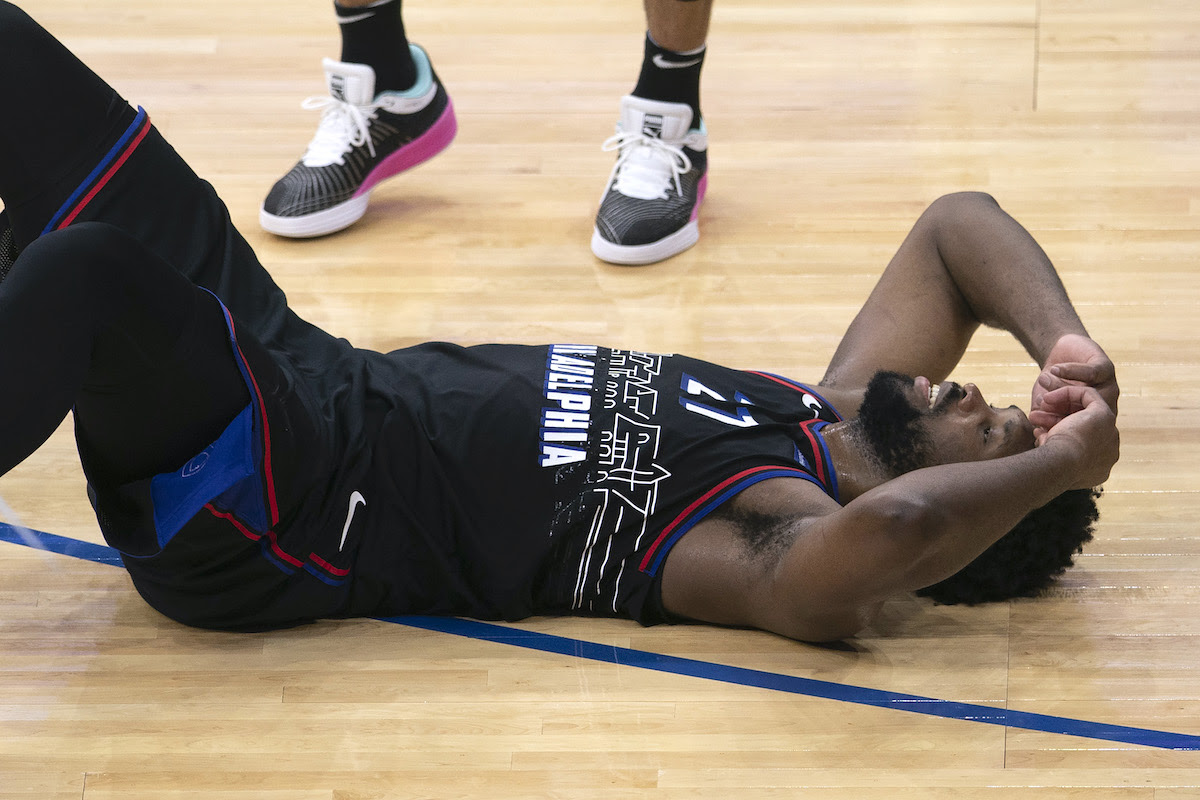 Some of you will scoff at a top story focused on a missed shot, and that’s fine. If the shoe fits… Joel Embiid nearly forced overtime between the 76ers and Suns last night (116-113) with the (almost) greatest buzzer-beater in NBA history. Chris Paul missed a free-throw with 0.8 seconds left before Embiid grabbed the rebound and gave it a full send from the opposite paint. Even though it missed, the in-and-out 90-footer sent social media ablaze. Embiid still finished with 38 points and 17 boards to strengthen his MVP case. If only he finished with 41…

Watch: Joel Embiid Came So Close to Hitting the Greatest Buzzer-Beater Ever

Knicks Win 8th Straight: The streak continues in New York. The Knicks survived the Hawks in overtime (137-127) behind a 40-point night from Julius Randle. The Hawks lost Trae Young to an ankle injury in the loss.

Wizards Quiet Curry: The Washington Wizards were the first team this month to hold Steph Curry in check (5-for-17, 18 points). They beat the Warriors (118-114) on a night where Russell Westbrook tallied his 10th triple-double of the month, and Bradley Beal (29 points) retook the scoring title lead from Curry.

Nuggets Not Saying Die: Despite losing Jamal Murray for the season with a knee injury, the Denver Nuggets are winners of four in a row. They beat the Blazers (106-105), and Nikola Jokic (25-9-5) is still holding strong in the MVP race. 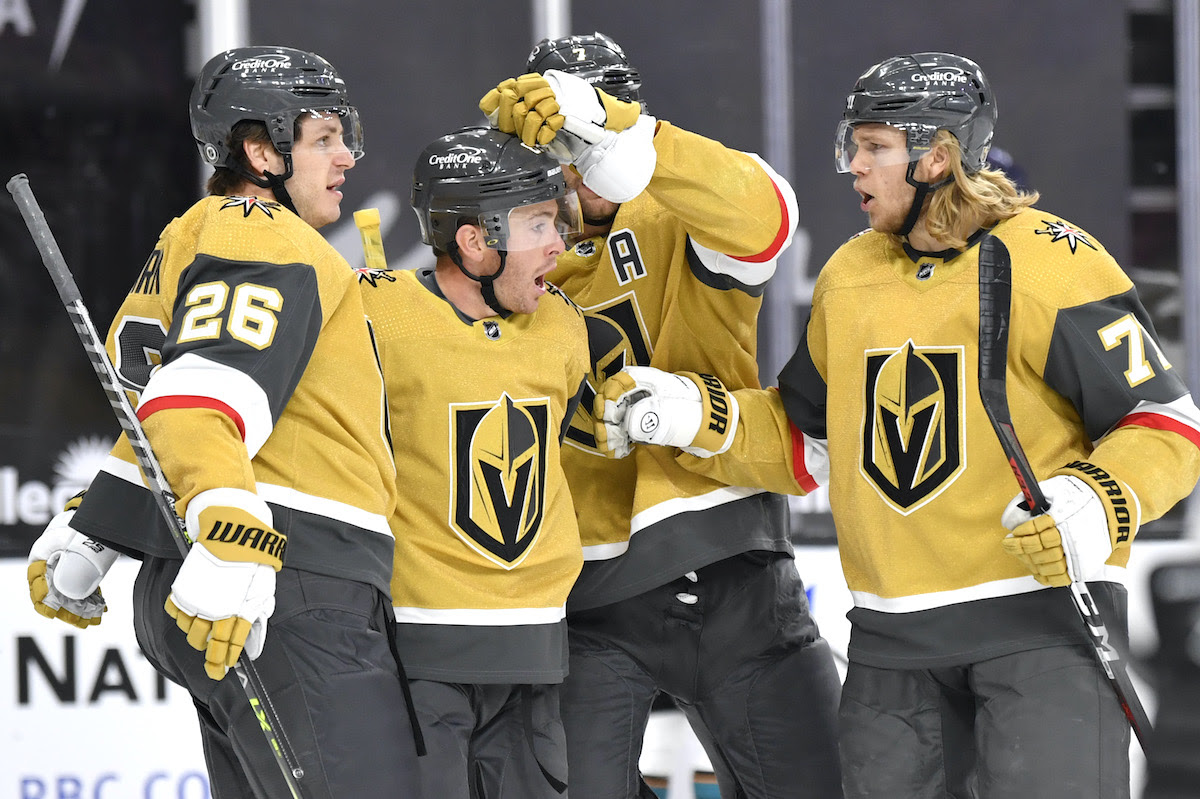 The first spot in the NHL postseason has been claimed, and it belongs to the Golden Knights. Vegas won its eighth straight game on Wednesday, defeating the Sharks (5-2) thanks to two goals and an assist from Jonathan Marchessault. Even more remarkable is that Vegas sits atop the most loaded division in the league — the West. Each of the top-three teams in the West are riding win streaks into late April. Vegas (W8), Colorado (W4) and Minnesota (W5) could bring hockey fans the most entertaining bracket in the divisional rounds of the playoffs.

Blackhawks Rally in 3rd: Chicago lit the lamp three times in the third to force OT with Nashville before swiping the extra period on Brandon Hagel’s winner (5-4, OT).

Canadiens Survive McDavid: The NHL’s points leader Connor McDavid (74) had a goal and two assists on Wednesday to account for all three of the Oilers’ goals, but the Canadiens hung on (4-3) to win a battle between third and fourth in the North.

Wild Win 5th Straight: Minnesota is trying to keep pace with Vegas and Colorado in the West, and they did just that with a 4-1 win over the Coyotes last night thanks to goaltender Cam Talbot’s 39 saves.

Back to Square One

James Harden initially suffered a strained hamstring in a game against the Houston Rockets on March 31. He missed two games and then returned for an April 5 battle against the New York Knicks. Now, the Nets have revealed that Harden suffered a setback on Tuesday and is out indefinitely. (CBS Sports)

The league announced Wednesday it will release its 2021 schedule with a new 18-week regular season on May 12 at 8 pm. ET. Teams are already aware of their 17 opponents for the upcoming campaign, it’s just a matter of finding out when each of those contests will take place. (Bleacher Report)

A dozen elite soccer teams tried to remake the competitive balance of the sport. They failed swiftly and spectacularly, but it’s naïve to think they’ve learned the right lessons from the debacle. (The Ringer)

Eagles Not Ready to Name Jalen Hurts Starting QB in 2021