The craziest Divisional Round ever? Four NFL playoff games, four walk-off finishes. No 1-seeds remain. Today’s edition is all NFL with a collection of weekend highlights.

Congratulations to Jeff Bigelow and Todd Alvey! Jeff and Todd were the only participants to correctly pick 3 out of 4 Divisional Round games. Not one of our 44 pick ‘em stars nailed all four picks.

Jeff and Todd — Keep an eye on your email to receive your spoils from The Sportsletter Store later today. 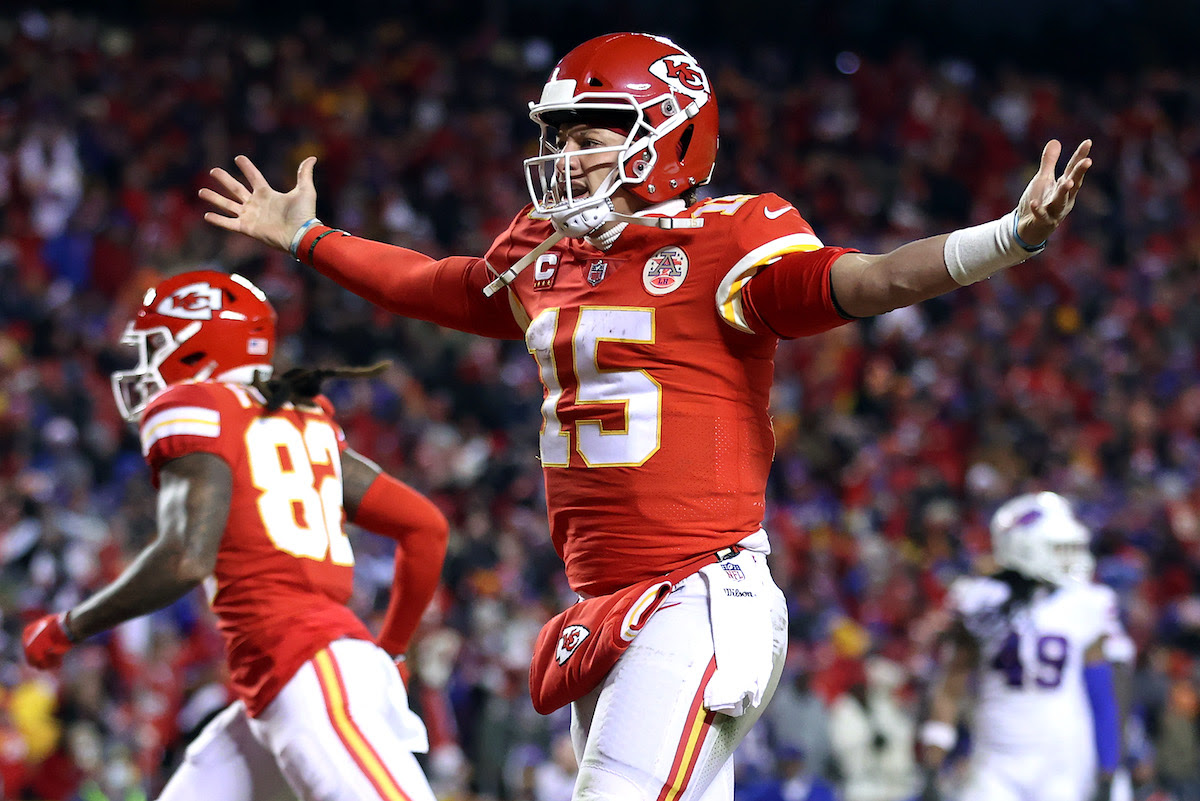 A quartet of NFL thrillers came down to the wire in the Divisional Round to trim the field to four. All four games were decided by either a walk-off field goal or overtime. Four teams remain, and none of the 1-seeds made it through their opening-round matchups. The underdogs are alive and well heading to the Championship Round. Let’s rewind the action.

Cincinnati marched into Tennessee and took down the 1-seed Titans to open the Divisional Round on Saturday. Bengals QB Joe Burrow (28/37, 348 yards, 1 INT) didn’t find the end zone, but Titans QB Ryan Tannehill tossed three picks, including one in the final minute, to set up Cincy’s game-winning field goal. Rookie kicker Evan McPherson was 4-for-4 including the 52-yard walk-off kick. It’s Cincinnati’s first trip to the AFC Championship Game in 33 years.

Saturday’s night-cap in snowy Green Bay saw the Niners play spoiler despite no offensive touchdowns. The Packers led 10-3 in the 4th quarter before a blocked punt recovered in the end zone tied the score. San Francisco got it back and lined up a 45-yard field goal from Robbie Gould as Tim expired. Gould is now 20-for-20 in the playoffs over his career, and Aaron Rodgers may have played his last game in a Packers uniform.

The Rams had the Bucs on the ropes for much of Sunday’s opener until a late surge made it a game. Los Angeles led 20-3 at the half, but a Tom Brady touchdown, a turnover, and a Leonard Fournette scamper turned a 27-13 scoreline into 27-all with 42 seconds left. Just when it looked like Brady and the Bucs might pull off a miracle, Matthew Stafford completed two passes to Cooper Kupp that set up kicker Matt Gay’s 30-yard winner. Stafford (28/38, 366 yards, 2 TDs) outdueled Brady to bring the Rams back home to L.A. for a date with the Niners.

After three game-winning field goals, somehow the Chiefs and Bills topped them all. Kansas City and Buffalo combined to score 25 points in the final two minutes, including three lead-changing touchdowns and a game-tying field goal by Chiefs’ kicker Harrison Butker. In overtime, Kansas City won the toss and marched down the field before Patrick Mahomes found Travis Kelce for the celebration-starter at Arrowhead. Bills QB Josh Allen was magnificent with 329 yards and 4 TDs — all to WR Gabriel Davis — but Mahomes (33/44, 378 yards, 3 TDs) got the last laugh. It’s Chiefs-Bengals in KC for the AFC Championship.

CBS Sports: The Wildest Divisional Round Weekend Ever: Every Game Won on a Walk-Off Play

Sunday’s most exciting finish in the NHL saw the Penguins top the Jets (3-2) thanks to Sidney Crosby’s shootout winner after a two-goal Pittsburgh comeback. The win marked the fifth straight for the Penguins.

Francis Ngannou defeated Ciryl Gane by unanimous decision (48-47, 48-47, 49-46) Saturday night in Anaheim to claim the undisputed heavyweight title. Ngannou was down on the cards early on, but he went to the ground game to take over. He’s now 17-3 at 35 years old.

Kansas State’s Ayoka Lee broke the NCAA’s Division I women’s basketball record with 61 points on Sunday against Oklahoma. The Wildcats knocked off the 14th-ranked Sooners (94-65) as Lee went 23-for-30 from the floor.

Is he really set to stay in Green Bay? And if not, who will lure him in? We rank the 12 most likely teams to land the Packers QB for the 2022 season. (CBS Sports)

The Bulls Injuries are Stacking Up

Do injuries to Lonzo Ball and Alex Caruso threaten the Chicago Bulls’ surprisingly strong season? Within days, they learned they’d be without both for the foreseeable future. (ESPN+)

Time May Run Out for Barry Bonds

It is a concept that grew into an expectation and on Tuesday night will likely become reality: Barry Bonds will not be elected to baseball’s Hall of Fame. (USA Today)