An instant classic in the women’s bracket rounded out the Final Four field destined for Minneapolis on Monday, and our full week of basketball is underway. Stay tuned for tomorrow’s special Underdog feature as we roll towards the final weekend of college hoops. 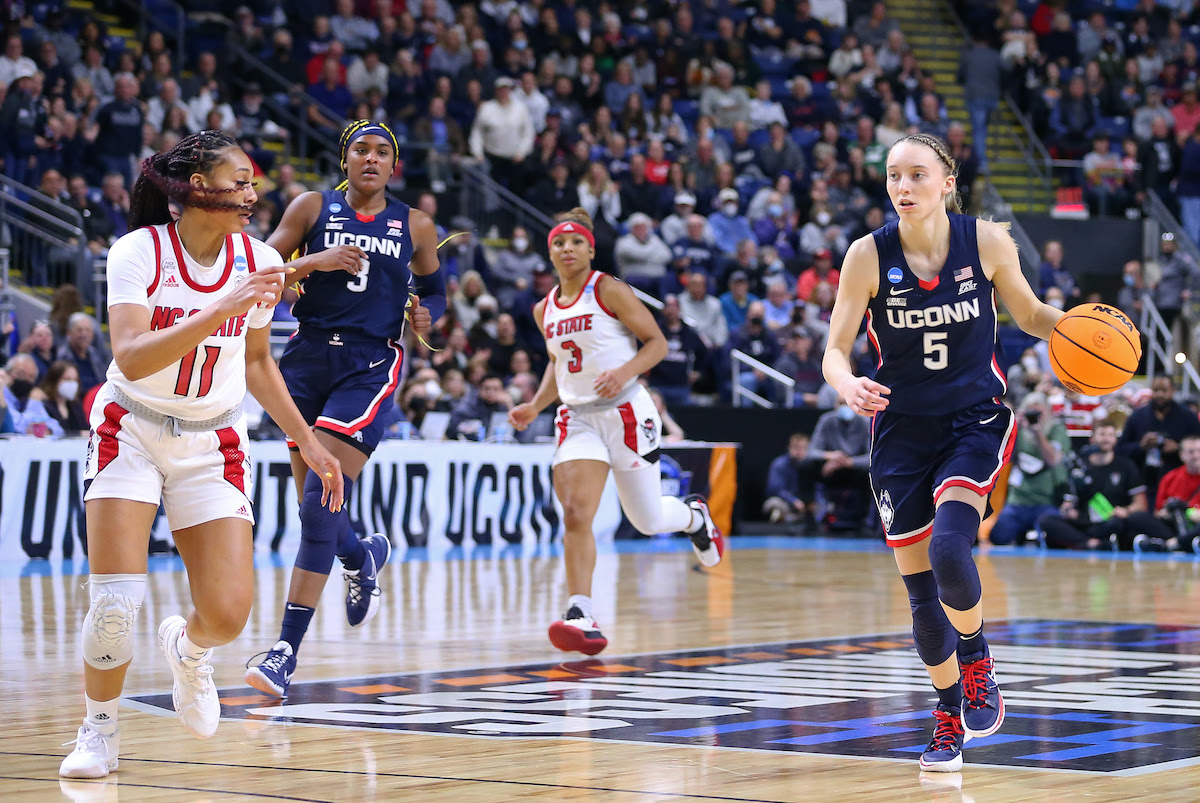 The women’s Final Four saw its last two tickets punched on Monday night starting with an instant classic between UConn and NC State, featuring a Paige Bueckers takeover. Louisville outlasted Michigan in the nightcap to round out the Final Four. Both teams will join the other two 1-seeds — #1 South Carolina and #1 Stanford — in Minneapolis for this weekend’s Final Four. The stage is set, and the last weekend of college hoops is almost here. Let’s recap last night’s action starting with the must-see finish in Bridgeport.

The thriller we needed! Monday’s opener marked the first-ever double-overtime game in the Elite 8 or later in women’s NCAA Tournament history. UConn and NC State went back and forth all night with 26 lead changes until Connecticut sophomore Paige Bueckers took over in the extra periods. Bueckers missed just one shot in the overtime periods and poured in 15 points (27 total). The trio of Bueckers (27), Christyn Williams (21) and Azzi Fudd (19) combined for 67. It’s the 14th consecutive trip to the Final Four for UConn (22nd overall). The Huskies persevered through numerous injuries all season long to reach Minneapolis, and a date with #1 Stanford awaits.

The third 1-seed to join the Final Four was Louisville in the Monday nightcap. The Cardinals blitz the Wolverines by 10 points in the 4th quarter to pull away down the stretch via free throws. Louisville held Michigan to just 16 field goals, and Hailey Van Lith was the star with 22 points. Michigan’s Naz Hillmon finished off her collegiate career with 18 points and 11 rebounds. Louisville is heading back to the Final Four for the first time since 2018. They’ve never won the title, but they’ve finished runner-up in the National Championship twice before (2009 & 2013). 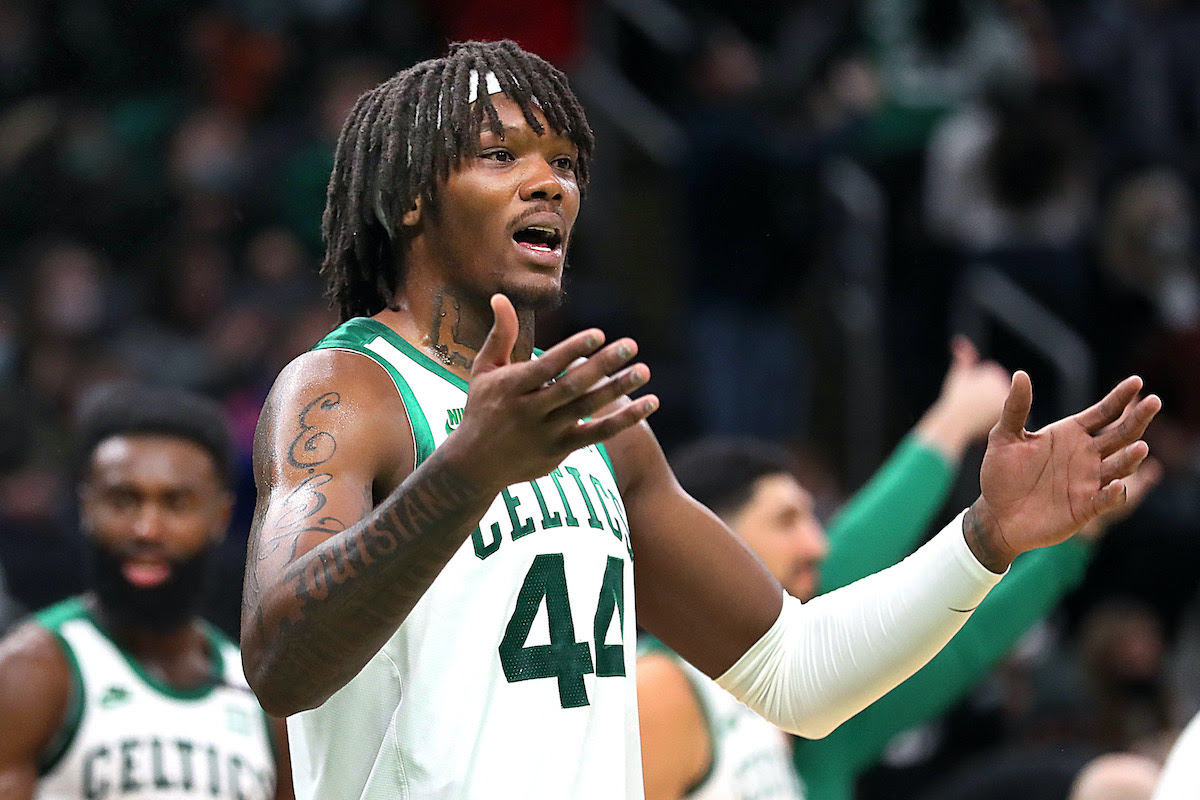 Just when everything looked right in Boston, now this. The Celtics have been the NBA’s hottest team since January, but a big loss to injury on Sunday became a big loss on Monday, and the latest win streak has been snapped. Starting center Robert Williams suffered a torn meniscus in Sunday’s game that will keep him out at least until the playoffs. Williams doesn’t score much — just 10.0 ppg — but his defensive presence has led the Boston’s league-leading defense. He ranks second in the league with 2.2 blocks per game. In their first game without Williams, Boston allowed 40 points to Toronto’s Pascal Siakam in an overtime loss to the Raptors. Their six-game win streak is over, and their hopes of the No. 1 seed in the East hang in the balance.

Ja-Less Grizz Blow Out Warriors: No Ja Morant? No problem for the Grizzlies. Memphis won its fifth straight without Morant by crushing Golden State (123-95). The Grizz are 10-1 in their last 11 games.

Heat Retake 1st in East: Miami bounced back from a four-game skid by beating the Kings (123-100) behind a 27-7-5 night from Jimmy Butler. Bam Adebayo added 22 points and 15 boards, and the Heat are back atop the East.

Jokic’s 19th Triple-Double: Nikola Jokic (26-19-11) stated his 19th triple-double of the season in the Nuggets’ win over the Hornets (113-109). It was Denver’s third win in four games, but the Nuggets are still flirting with the play-in.

Who do you want to see win the men’s Final Four?

Click to vote. Results will be posted in tomorrow’s edition.

The Final Four teams – Villanova, Kansas (three each), Duke (five) and North Carolina (six) – have combined to win 17 men’s national basketball championships. Here’s everything you need to know about the NCAA Tournament odds for the Final Four. (FOX Sports)

There was a flurry of post-lockout trades as front offices tried to cram three months of offseason transactions into 10 days. Now that the dust has mostly settled, let’s give each team an offseason grade. (ESPN+)

Scottie Scheffler’s Ascent to No. 1

There’s all manner of statistic to quantify what Scheffler has accomplished in a shockingly short amount of time, but his ascent is best explained by the fact that he went from his first PGA Tour victory, the WM Phoenix Open in February, to world No. 1 in 42 days. (NBC Sports)

The Tuesday night schedule features the men’s NCAA NIT Final Four as well as a deep slate of NBA and NHL matchups among playoff teams.