Another night of NBA action saw the Celtics advance to the second round, and they swept the preseason title favorites to do it. We’re inching closer to the NFL Draft, and the Mets are the top team in baseball after a final-out rally you have to see to believe. 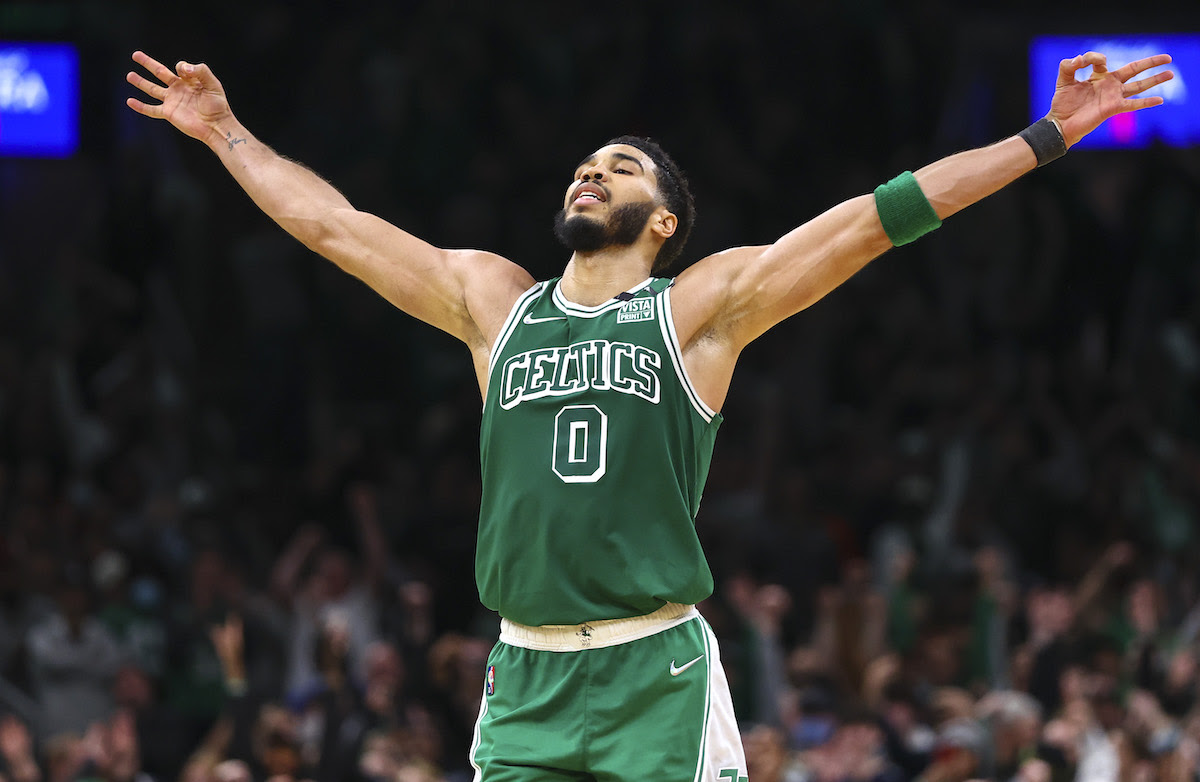 Moving on! The Boston Celtics are the first team to advance out of the first round of the NBA Playoffs after putting the nail in the coffin of the Nets’ season. Monday’s Game 4 win (116-112) marked the sweep in a series where every game was decided by seven points or less. Jayson Tatum (29 points) led the Celtics’ charge as Boston continues to sit on the throne as the hottest team in the NBA. They’ve won 20 of their last 25 dating back to February. Kevin Durant’s 39 points weren’t enough to avoid the brooms, and the Celtics now await the winner of the Bucks-Bulls series.

Things are getting interesting in the East. The Raptors — after falling behind 3-0 to open the series — reeled off another win Monday in Philadelphia. Toronto blitzed the 76ers in the second quarter and held Joel Embiid to just 20 points. James Harden (15 points) has remained mediocre throughout the series. Pascal Siakam (23 points, 10 rebounds, 7 assists) was the star of Game 5, and Toronto heads back to Jurassic Park with the firepower to make it a seven-game series. No team in NBA history has won a series after trailing 3-0. PHI Leads Series 3-2

The Dallas Mavericks have gotten a much-needed boost from the return of their star player. Luka Doncic (33 points, 13 rebounds, 5 assists) and Jalen Brunson (24 points) packed a 1-2 punch for Dallas that demoralized Utah on Monday. The Jazz shot just 10 percent from 3-point range — including a combined 0-for-15 between starters Donovan Mitchell, Mike Conley and Bojan Bogdanovic — and only two Jazz players scored in double figures. The series swings back to Utah, but the Mavs look like a new team with Luka back in action. DAL Leads Series (3-2)

The NBA Awards announcements continued on Monday with the league naming Grizzlies’ star Ja Morant as the Most Improved Player. Morant average a career-high 27.4 points per game alongside 6.7 assists and 5.7 rebounds en route to his first all-star nod in his third season. The No. 2 pick in 2019 was also on the short list for MVP during much of the year. He led the Grizzlies to a 56-26 record — tied for the best mark in franchise history.

NBA.com: What We’ve Learned About All 16 Playoff Teams During the Postseason 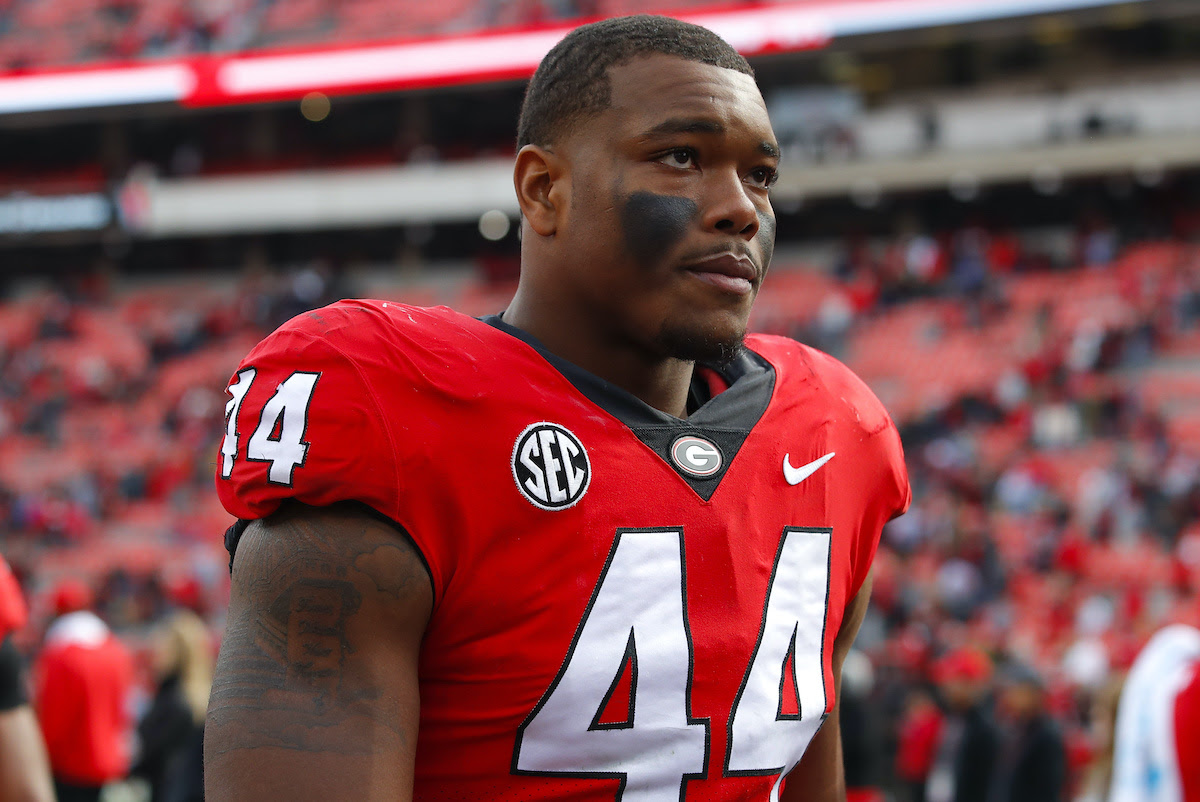 Thursday’s NFL Draft is wide open at the top, and that’s not normal. It’s one of the first times in recent history that the projected No. 1 pick has flip-flopped throughout the draft process. The last four No. 1 overall picks have been surefire quarterbacks who were known long before draft night. That changes Thursday. Michigan DE Aidan Hutchinson was expected to be the top pick by the Jacksonville Jaguars for the last few months, but betting odds now put Georgia DE Travon Walker at the top. The flip comes just three days before the selection show.

Since 2000, the last 21 No. 1 overall picks have been quarterbacks (15), defensive ends (4) or offensive tackles (2). That trend will certainly continue with the top-three picks on Thursday expected to be Walker (DE), Hutchinson (DE) and Evan Neal (OT).

Hutchinson held the consensus No. 1 overall projection since the scouting combine. Walker wasn’t even the best player on Georgia’s defense last season, but his combine numbers vaulted him into the conversation. So what changed? Both players are eerily similar, but Jaguars GM Trent Baalke’s recent comments seem to favor Walker, even though he said the team’s choice still undecided.

Who will go No. 1 on Thursday? Bring on the most mysterious NFL Draft in recent memory.

CBS Sports: Six Surprising Scenarios That Could Completely Change the 1st Round 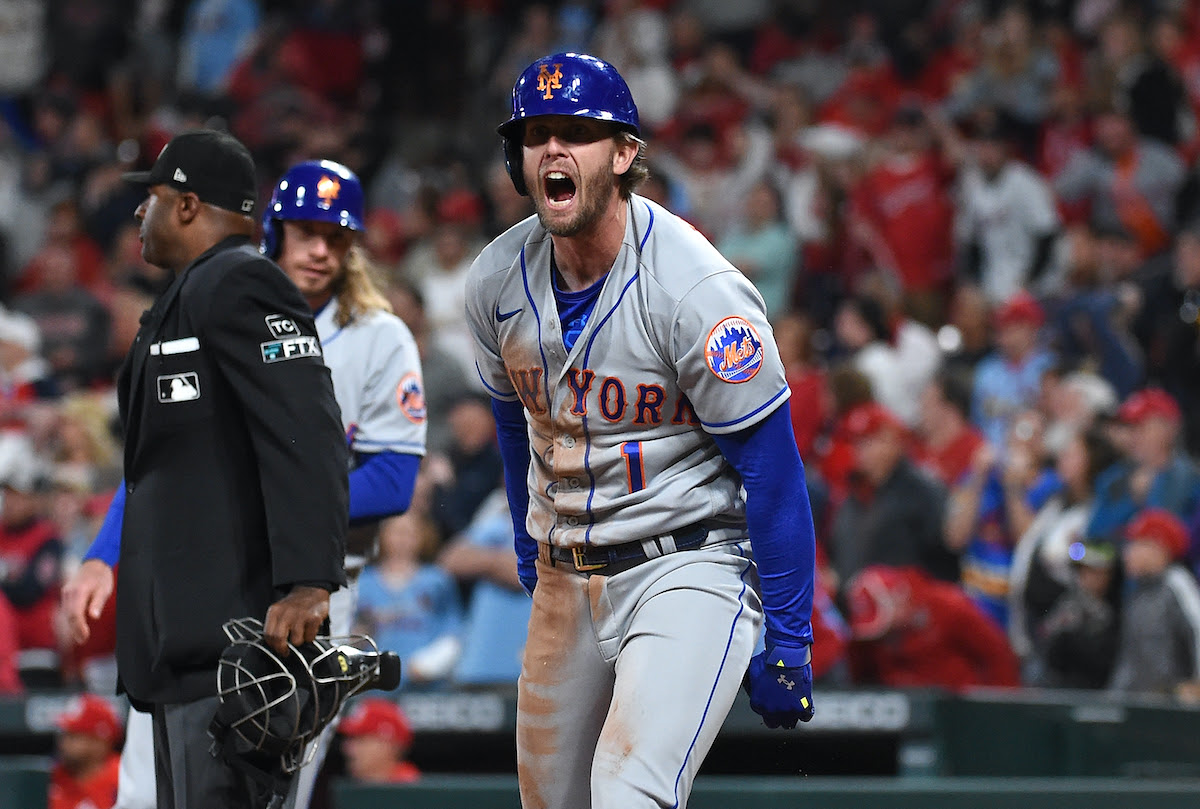 You can’t make this one up. The New York Mets didn’t score a run for 26 outs on Monday night against the Cardinals, and then the floodgates opened. The Mets trailed the Cards (2-0) down to their final out in the 9th inning despite a gem from Max Scherzer (7 IP, 10 Ks, 2 Hits). After putting two men on, Dominic Smith slid into first to keep the game alive and score the tying and go-ahead runs. Moments later, Brandon Nimmo hit a two-run homer and New York plated five runs after 9.2 scoreless innings. The wild win gave the Mets (13-5) the best record in the majors.

Watch: Mets Rally on Final Out Behind Scherzer’s Gem

Bichette’s 1st Slam: Bo, my! Bo Bichette smacked his first career grand slam on Monday to turn a 2-2 game into a 6-2 win for the Blue Jays against the Red Sox.

Trout’s Check Triple: Here’s a weird one. Angels star Mike Trout poked a line drive down the first-base line on a check swing against Shane Beiber that somehow turned into a triple. The Angels shut out the Guardians (3-0).

Giants Spoil the Burner: Corbin Burnes tossed an 11-strikeout masterpiece for the Brewers that held the Giants scoreless through seven innings, but San Francisco tallied four runs in the 8th and 9th off homers from Joc Pederson and Luis Gonzales to win their fourth straight game (4-2).

Draft busts come in all different forms. Whether these players were plagued by injury, didn’t have the skill to translate to the NFL level or had troubles away from the field, they all failed to live up to the hype in some way. (Bleacher Report)

The NHL regular season, for all intents and purposes, ends on April 29, with a Seattle Kraken-Winnipeg Jets makeup game on May 1 having no impact in the playoff race. Here is some of what is still up in the air in the NHL’s final week… (USA Today)

We’re a couple of weeks into the season now, and the best of the best are starting to show it, the worst of the bunch are struggling, and some surprise teams are still hanging around. Here are the top-10 teams in baseball right now. (FOX Sports)