Final Four weekend needs no introduction. Let’s jump into April and the final four days of college hoops a pair of primers to get you ready for the Madness finale. 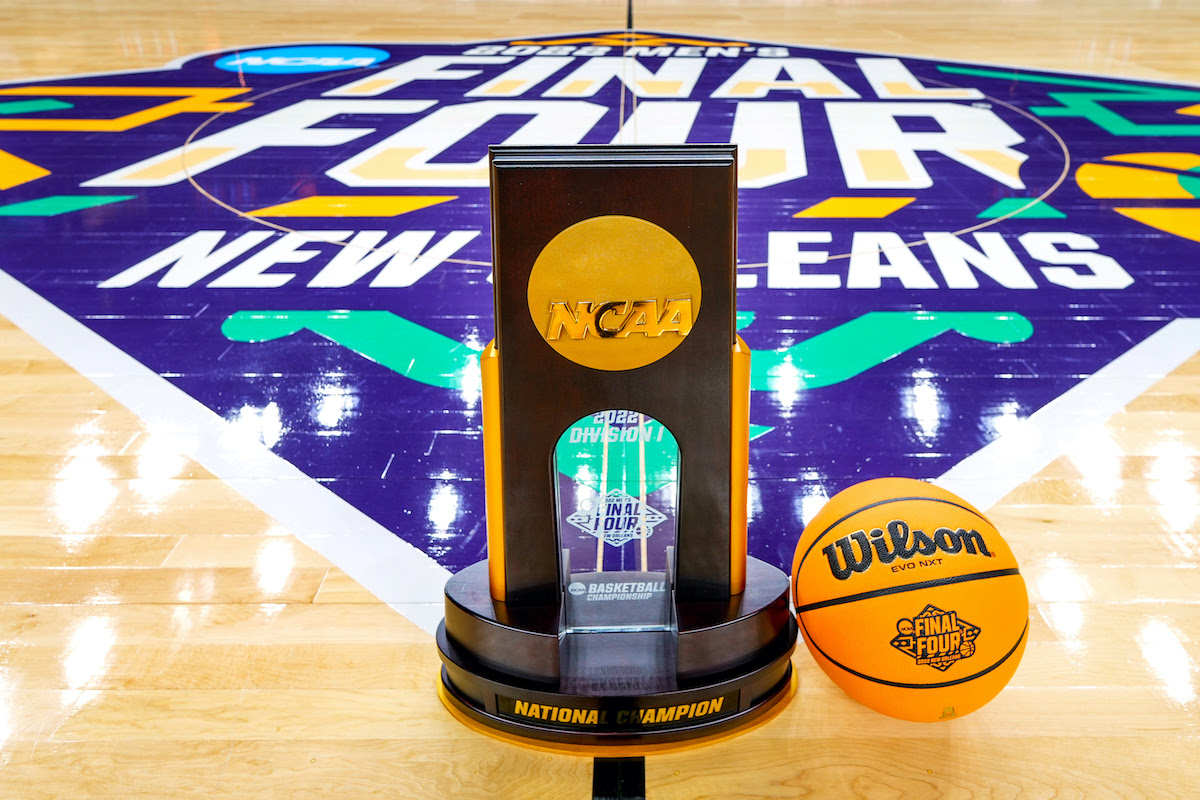 Here. We. Go. After a March full of madness, the calendar turns to April and the Final Fours are ready to tip. The big weekend of college basketball tips off tonight in Minneapolis before the men’s finale jumps Saturday in New Orleans. Here’s everything you need to know for both events. We’ll crown champions in Monday and Tuesday editions.

It’s three 1-seeds and the Huskies’ dynasty ready for action in the women’s Final Four. Louisville and South Carolina go head-to-head in tonight’s first matchup that’ll see Naismith Player of the Year Aliyah Boston (South Carolina) with a size mismatch against the Cardinals. South Carolina (33-2) lost just two games all season by a combined three points. They’re 8.5-point favorites. In the nightcap, it’s the defending champs from Stanford against Paige Bueckers and UConn in another unique matchup. Both teams have guards who can shine, but Cameron Brink (Stanford) has the advantage inside. Stanford is a 1.5-point favorite.

Recent History: Overall, three of the last five women’s champions are in Minneapolis — Stanford (2021), South Carolina (2017) and UConn (2016). Could it be Louisville’s turn?

Blue bloods reign supreme in New Orleans. This year’s men’s Final Four features four teams who rank top-10 teams in all-time championships. The 17 combined titles between UNC (6), Duke (5), Kansas (3) and Villanova (3) makes this the first Final Four in which every team has won a championship. The Jayhawks and Wildcats kick things off on Saturday with KU as a 4.5-point favorite. Kansas star Ochai Agbaji has disappeared a few times in this year’s tournament, and he’s likely the x-factor for KU. Saturday’s second game is the one we’re all eyeing. Duke is a 4-point favorite against Carolina, but the first-ever Tobacco Road rivalry in the NCAA Tournament could be Coach K’s last game. Carolina is 2-1 against Duke this year’s, but both teams have been stellar in the postseason. One of sports’ greatest rivalries just got an upgrade.

Soak it up… The last weekend of college basketball is here!

B/R: The 2022 Men’s NCAA All-Tournament Team Ahead of the Final Four

SI: The Key Factor for Each Team in the Women’s Final Four 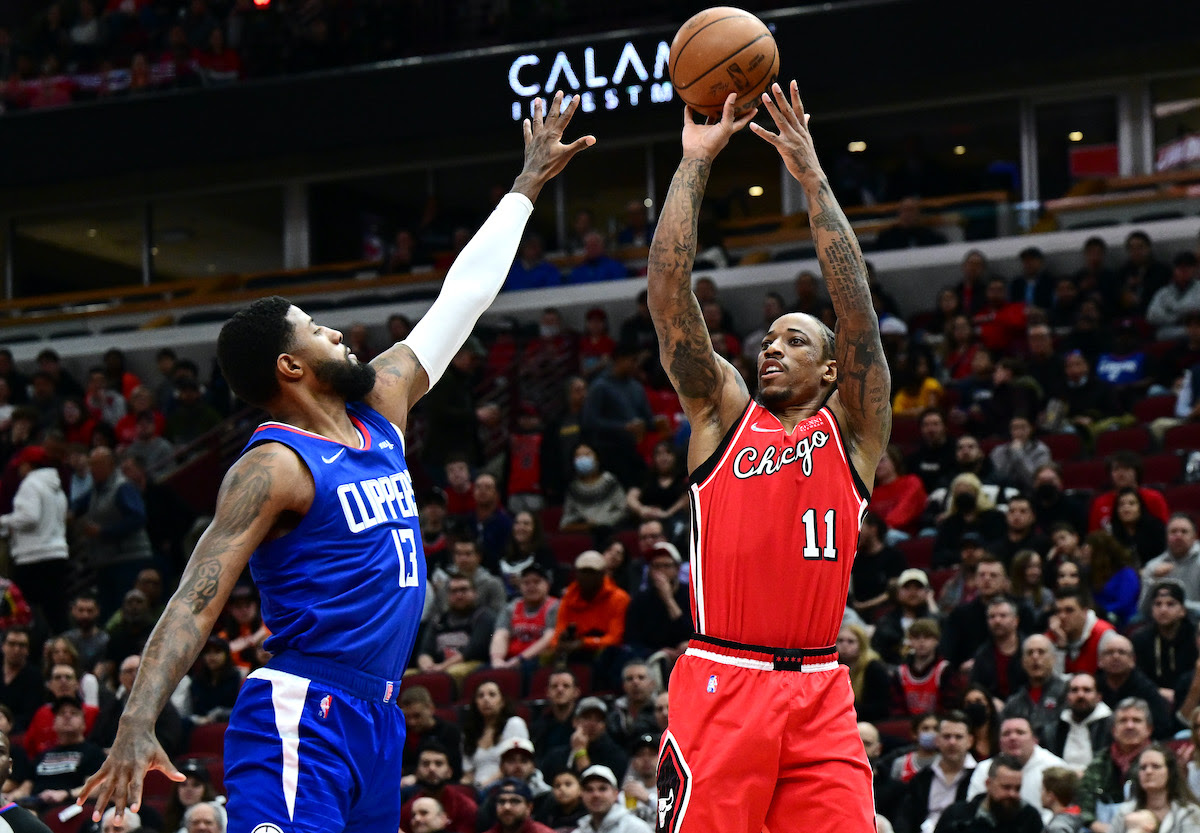 The NBA got another 50-point performance to end a wild month of March, and this one came from Chicago. DeMar DeRozan (50 points, 5 rebounds, 6 assists) put up a season-high en route to the Bulls’ win over the Clippers (135-130, OT). DeRozan went 17-for-26 from the floor and a perfect 2-for-2 from deep. He also hit 14 of 15 free throws with the lone miss coming at the end of regulation. It was a much-needed win for Chicago (45-32) whose still fighting to remain in the top six of the Eastern Conference and avoid the play-in.

Giannis Makes Bucks History: Giannis Antetokounmpo (44 points, 14 rebounds, 6 assists) powered Milwaukee to a narrow win over the Nets (120-119, OT) as he passed Kareem Abdul-Jabbar for the most points in Bucks franchise history.

Lakers Loss Spells Trouble: The Jazz handed the Lakers their fourth straight loss on Thursday (122-109) to bump L.A. out of the playoff picture entirely. The Lakers (11th) are tied with the Spurs (10th) but San Antonio holds the tiebreaker with six games left. 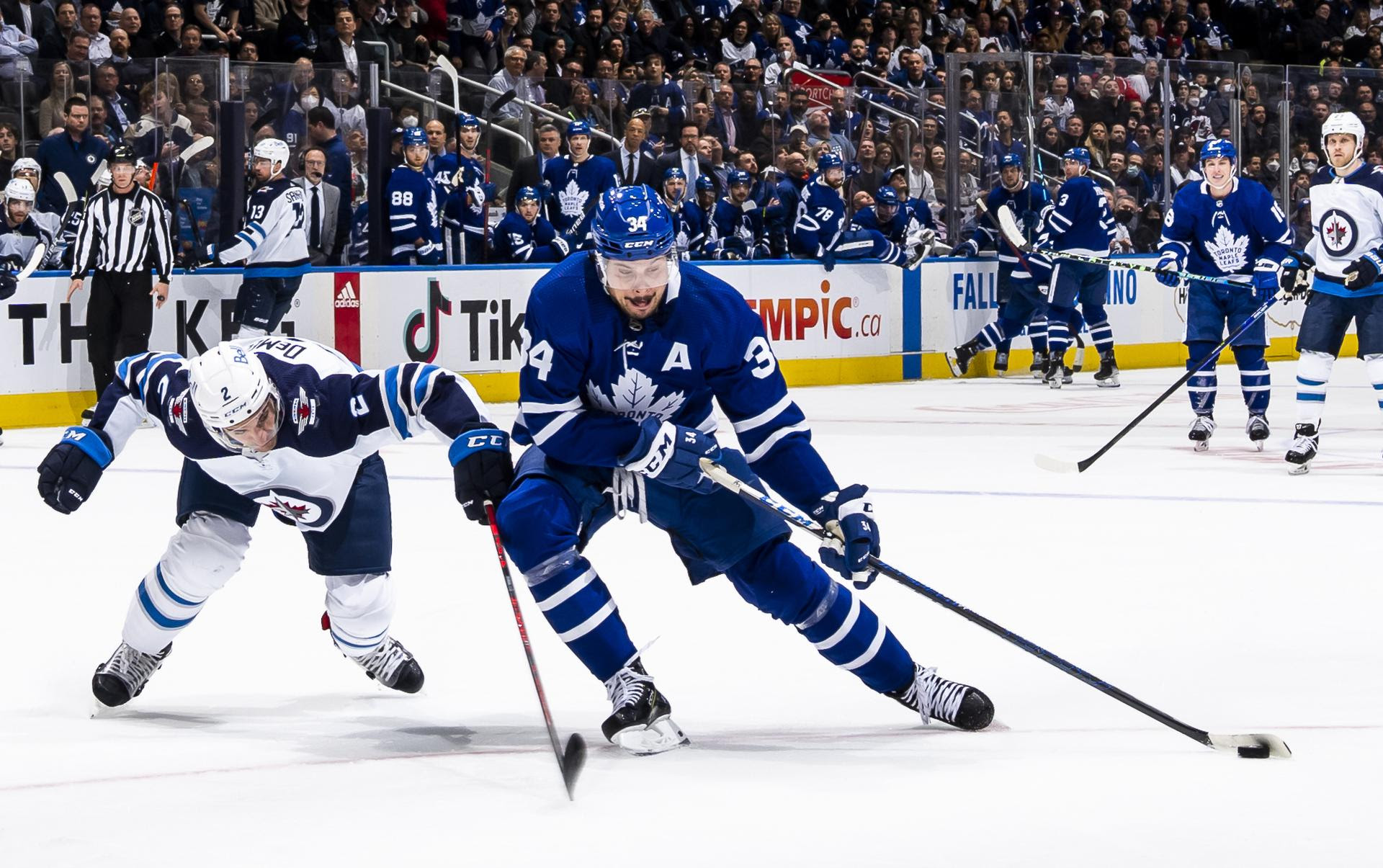 Back and forth, they go. Auston Matthews retook the NHL goals lead from Leon Draisaitl with No. 50 — an empty-netter in garbage time — on Thursday night in the Maple Leafs’ win over the Jets (7-3). Mark Giordano also got his first goal in a Leafs uniform. The victory was Toronto’s third straight as they kept pace in a wild Atlantic Division race where the Panthers (1st), Leafs (2nd), Lightning (3rd) and Bruins (4th) are all riding win streaks.

Bruins Thrash Devils: Boston increased its wild card lead with an 8-1 beatdown of the Devils on Thursday night, including six straight goals in the second period to eliminate New Jersey from the playoffs.

Malkin Ends Wild Streak: Evgeni Malkin put a pin in the Wild’s seven-game win streak on Thursday with an overtime winner for the Penguins (4-3, OT). The victory pulled Pittsburgh back within a point of the Rangers for 2nd in the Metro.

The NIT finale featured 17 lead changes and came down to the wire on Thursday before Xavier topped Texas A&M (73-72) courtesy of Jack Nunge’s wild bank-shot in the final seconds. Xavier’s Colby Jones led the way with 21 points and Nunge added 15 points and 11 boards for the Musketeers.

Scottish 36-year-old Russell Knox (-7) sits atop the leaderboard after Round 1 of the Valero Texas Open. The PGA Tour’s last stop before The Masters might be missing some big names, but Knox hasn’t won an event since 2016. Round 2 continues today.

Final Four weekend is here! Our focus is on the women’s and men’s NCAA finales, as well as the stretch runs of the regular season in the NBA and NHL. We’re less than a week away from MLB Opening Day… Here comes April!