Game 1 of the NBA Finals tips off tonight, and The Sportsletter’s Matthew Cahill is here to set the tone. We also have a lengthy list of Wednesday highlights that need our attention. From Ukraine’s World Cup pursuit to the French Open and more, another sports weekend is near. 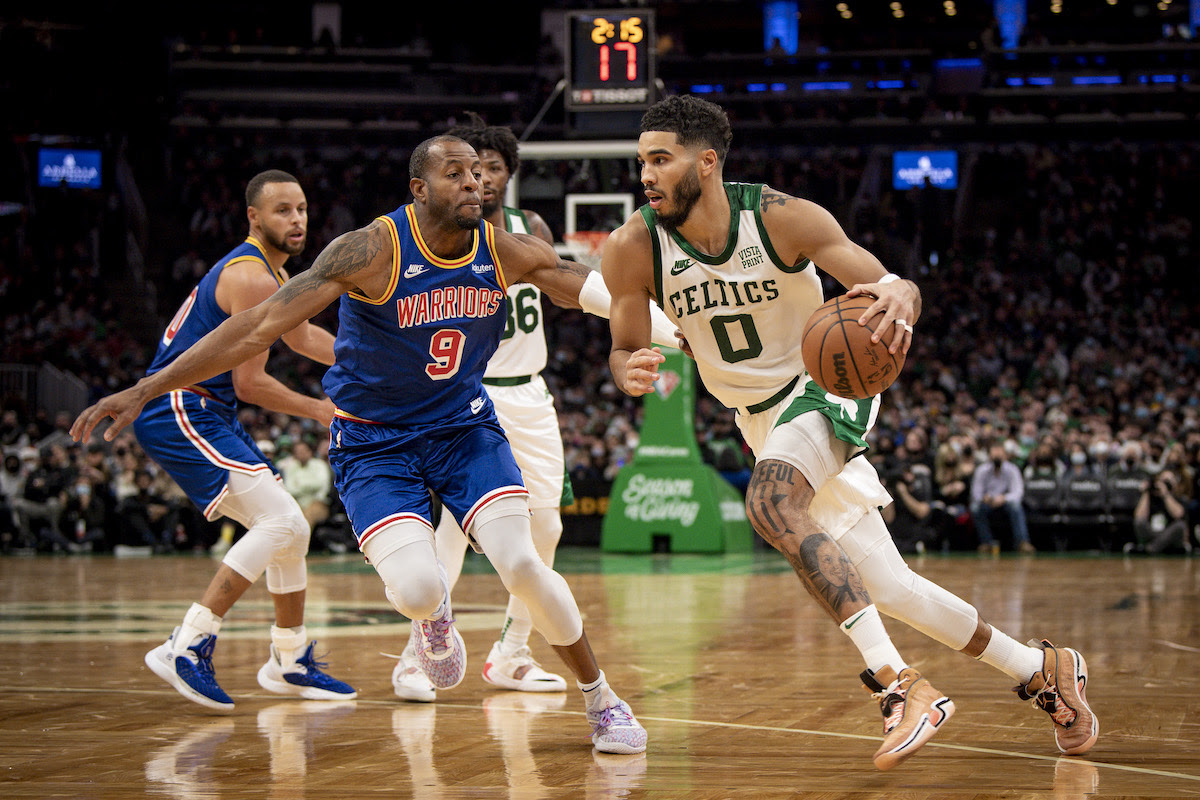 It’s finally here! The NBA Finals tip off tonight with the Boston Celtics heading into the Bay to take on the Golden State Warriors for Game 1. The Warriors are looking to solidify themselves as a modern dynasty with their fourth title in eight years, while the Celtics are trying to cap off the greatest in-season turnaround in NBA history with their first ring since 2008. Here’s all you need to know heading into this exciting matchup.

How The Celtics Got to the Finals

A midseason surge propelled the Celtics to the 2 seed and matched them up with the Kevin-Durant-led Nets in what was arguably the most anticipated first-round series in NBA history. The series ended up being a massive disappointment, mainly because Boston dominated Brooklyn, sweeping them to prove that they were legitimate Finals contenders. From there, the road has been anything but smooth sailing. After an all-time 4th-quarter collapse at home in Game 5 against the Bucks in the second round, the Celtics found themselves facing elimination on the road in Milwaukee for Game 6. Jayson Tatum then responded by putting up 46 to save the Celtics’ season, and they went on to win Game 7. Boston then made their lives difficult again by failing to close out the Heat in Game 6 on their home floor last week, but they responded by going into Miami and picked up a monumental Game 7 victory on the road to punch their ticket to the Finals.

How The Warriors Got to the Finals

Golden State headed into the postseason with some major questions, that have all definitively been answered. The trio of Stephen Curry, Klay Thompson, and Draymond Green played essentially no time together in the regular season as all three dealt with injuries that kept them out at separate times. With that in mind, many people doubted if the Dubs could put it together on the fly in the playoffs and get back to the Finals. It seems like the Warriors heard all the chatter, and they dominated the Nuggets, Grizzlies, and Mavericks in succession to stamp their sixth trip to the Finals since 2015. Jordan Poole (18.4 PPG) has emerged as a lethal spark plug in the Warriors lineup while former No. 1 pick Andrew Wiggins has been the perfect 3-and-D wing. Add those two to the continued brilliance of a healthy Curry, Thompson, and Green, and you have the Warriors picking up right where they left off as title favorites.

3 Biggest Questions for the Finals

1. How Much Will Experience Matter?

No team has played in more playoff games than the Celtics since Jayson Tatum arrived in the 2018 season (68 games). Despite that, not a single player on Boston’s roster has a single game of Finals experience. The Warriors’ players, on the other hand, have an absurd 123 Finals games under their belt. So even though Boston has proven to be battle-tested over the years, it will be telling to see if they can still perform when the lights are the brightest.

2. Can the Warriors Defend Home Court?

Golden State has been perfect at home throughout these playoffs (9-0). Despite that, no team loves going on the road more than the Celtics, who actually have a better record on the road (7-2) compared to home (5-4). If Boston wants a chance to win the series, they’re going to have to prove they can win in the toughest environment in the NBA.

3. Do the Celtics Really Have the Dubs’ Number?

Since Steve Kerr took over as head coach and the Warriors became the juggernaut we know them as today, the only team he has a losing record against in that span is the Boston Celtics. The Warriors are just 7-9 against them since 2015. The Celtics infamously broke the Warriors 54-game home winning streak back in 2016, and Marcus Smart has historically given Stephen Curry problems when guarding him (33% FG). If the Warriors want to reclaim their spot at the top of the NBA, they’re going to have to take down the one team they can’t seem to figure out.

Rangers Roll in the Garden 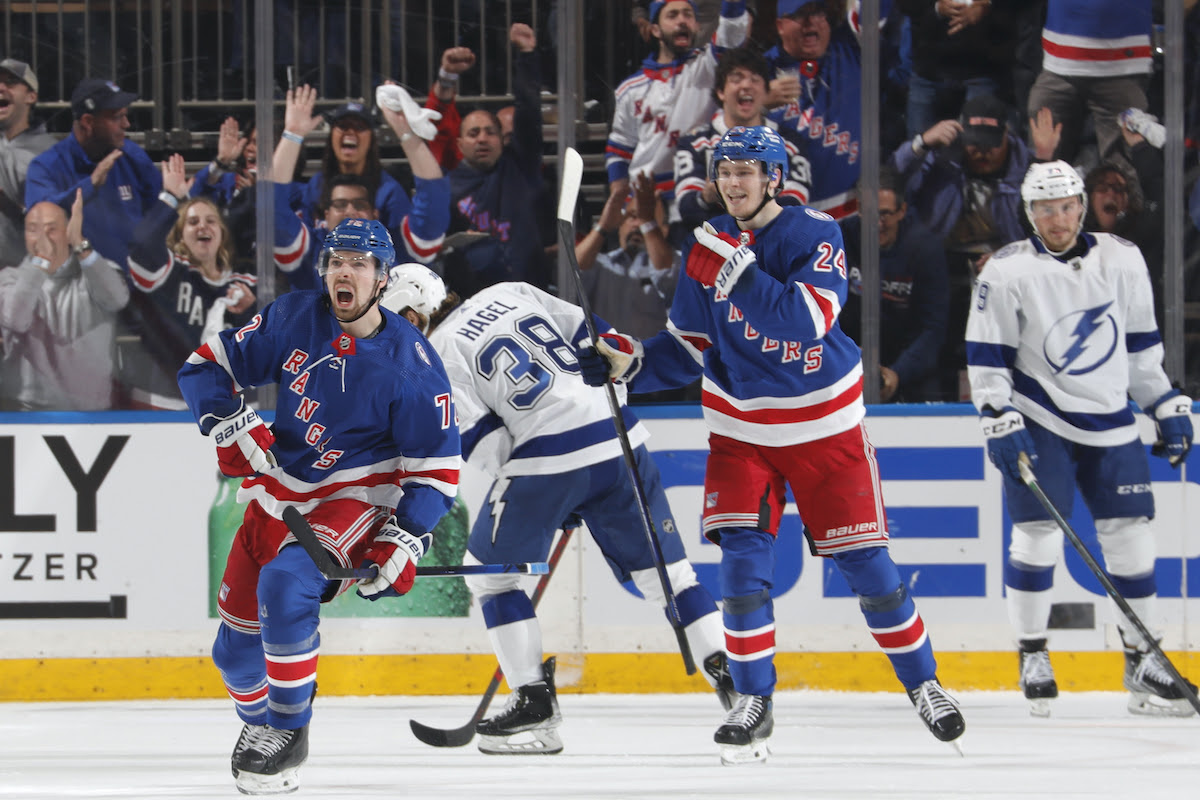 Game 1 belongs to New York! The Eastern Conference Finals started with a bang on Wednesday night when Chris Kreider lit the lamp just 1:11 into the game. Both teams traded goals (2-2) until a pair of Filip Chytil scores pushed the Rangers out in front. Artemi Panarin and Mika Zibanejad tacked on two more in the third period, and the Rangers rolled to a Game 1 win (6-2) in front of a ruckus Madison Square Garden.

Goalies Under the Radar

The much-anticipated goaltender battle between Andrei Vasilevskiy (Lightning) and Igor Shesterkin (Rangers) was one-sided in Round 1. Shesterkin’s 37 saves and .949 save percentage could be a sign of the series advantage for New York.

The top seed in the women’s draw of the French Open is on to the semis. #1 Iga Swiatek took down #11 Jessica Pegula in straight sets (6-3, 6-2). She’s dropped just one set via tiebreaker in the entire tournament at Roland-Garros.

The fourth rendition of The Match pitted four quarterbacks in teams of two Wednesday in Las Vegas. Tom Brady and Aaron Rodgers defeated Patrick Mahomes and Josh Allen thanks to Rodgers’ birdie putt on the final hole.

For the first time since the Russian invasion, the Ukrainian national team took the pitch and beat Scotland in a World Cup qualifying match (3-1). The magical moment means Ukraine will face Wales for a spot at Qatar.

Have a night, Brendan Rodgers! The Rockies’ 25-year-old went yard three times in Colorado’s 13-12 win over the Marlins, finishing it off with a walk-off shot in the 10th inning.

It’s been nearly four years since a Major League Baseball team fired a manager around the midseason mark. Still, it seems like only a matter of time before a manager is handed their walking papers before they can flip their office calendar to September. (CBS Sports)

Who’s the most intriguing non-superstar in the clash between the Celtics and Warriors? Whose legacy will be most affected by the results of the series? We answer six big questions ahead of Game 1. (The Ringer)

The 1 Move Every NFL Team Needs to Make

As coaches lead OTAs on the practice field, some front offices will engage in negotiations with players who want new deals. Other clubs may look to add competition at certain positions or part ways with veterans to generate opportunities for younger, higher-upside talent. (Bleacher Report)