If you had told the Celtics that Steph Curry would go 0-for-9 from 3 in Game 5, they would’ve called that a win. It wasn’t. The Warriors are on the brink of a fourth title in seven years thanks to an unlikely hero. Dubs in 6? Or will the Cs force Game 7? 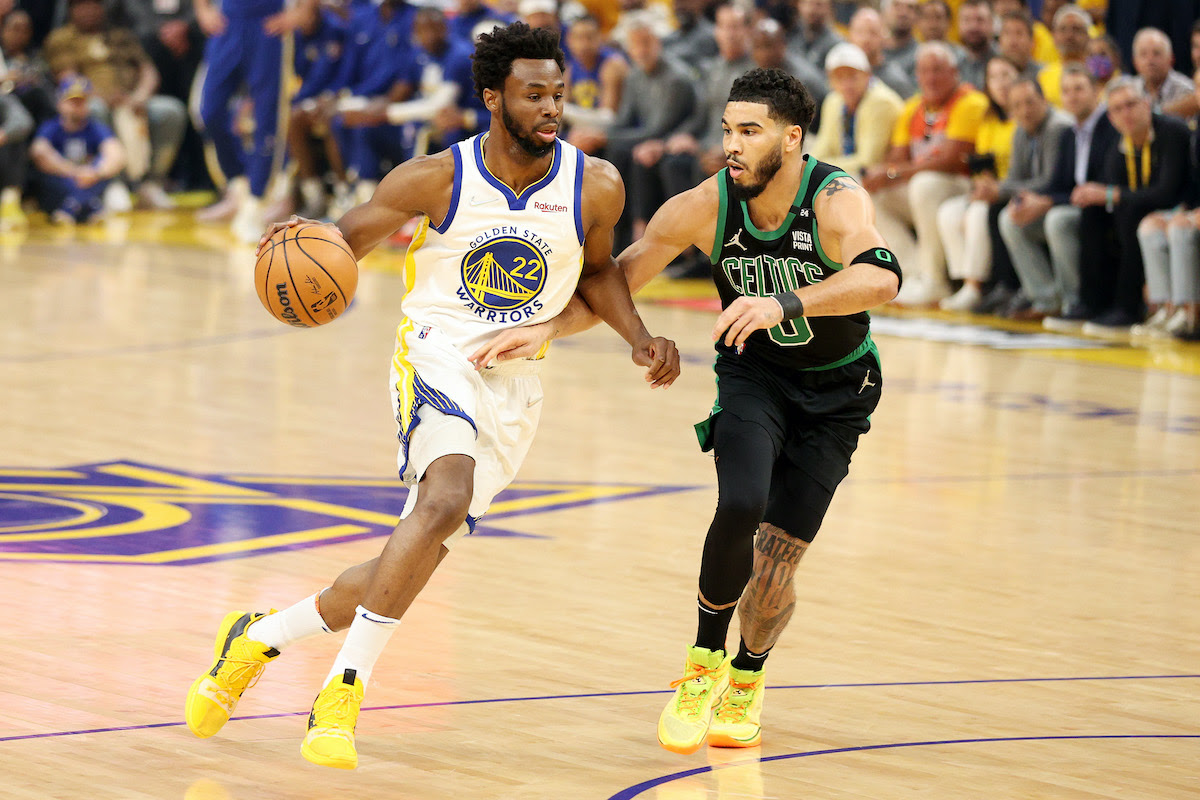 Game 5 goes to Golden State! The Warriors took Game 4 behind a 43-point night from Steph Curry, but Game 5 was a different story. It was Andrew Wiggins (26 points, 13 rebounds) who shined the brightest on Monday night as Curry had a historically bad shooting performance. Wiggins filled the gap on offense while holding Jayson Tatum to just five points in the 4th quarter on 1-for-5 shooting. The Warriors held the advantage through most of the first half. Boston took the lead on the scoreboard in the 3rd, but the Dubs flipped it back with a Jordan Poole buzzer-beater that sparked a 13-0 run before cruising to a double-digit win.

Curry Goes Cold: Steph Curry scored just 16 points on 7-for-22 shooting, including a stunning 0-for-9 night from 3-point range. It was the first time in Curry’s playoff career that he went 0-for-anything from deep, and it snapped a 233-game streak with at least one 3.

Dubs by Committee: The Warriors’ supporting cast stepped up on Curry’s cold night, including Wiggins’ 26 along with 50 combined from Klay Thompson (21), Gary Payton II (15) and Jordan Poole (14).

Fun Fact: The Celtics were 7-0 following a loss this postseason (now 7-1). They’ve also went to Game 7 in each of the last two rounds, so don’t count Boston out yet.

The Warriors are one win away from their fourth title in seven years. Game 6 heads back to Boston, and it’s do-or-die for the Celtics. GSW Leads Series (3-2)

B/R: Andrew Wiggins Says Game 6 Will Be ‘Opportunity of a Lifetime’ 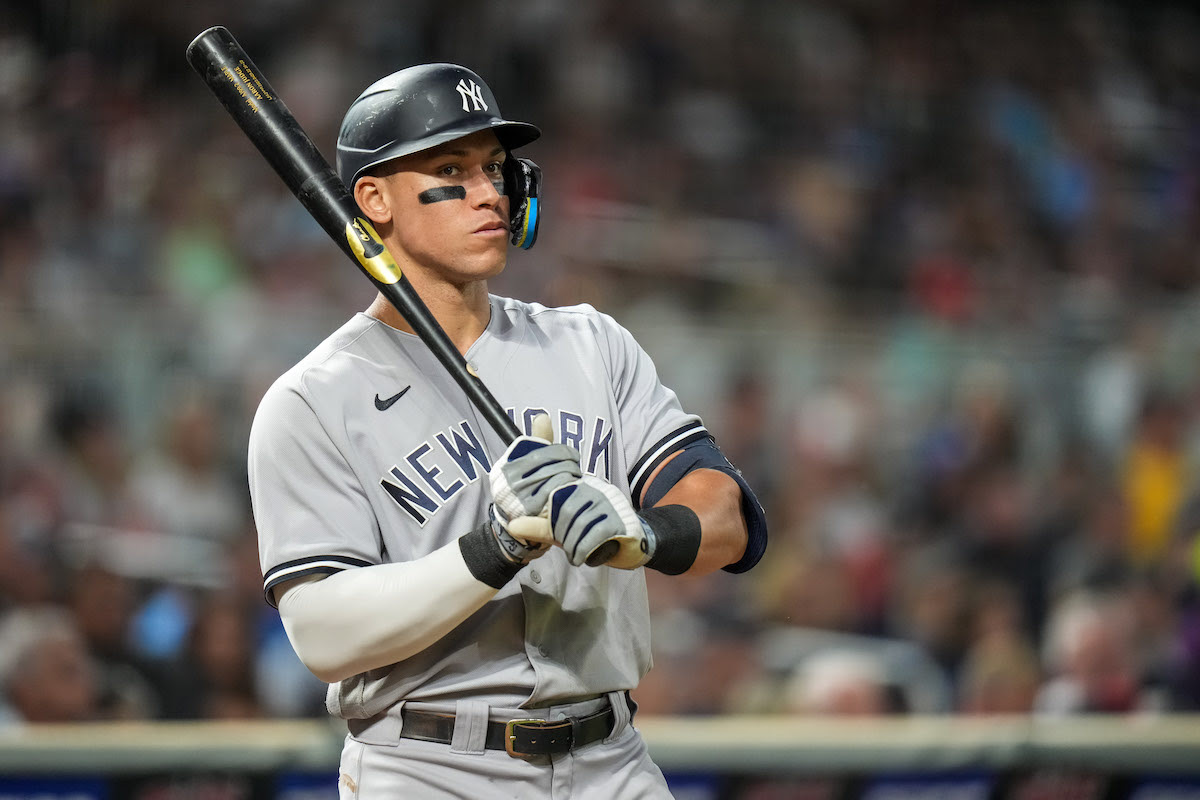 After roughly 60 games (over 1/3 of the MLB season), it’s our first check-in on the home run leaderboard, and one man stands alone. Yankees slugger Aaron Judge (24) has more blasts than anyone at the 60-game mark, and it’s not even close. Twins outfielder Byron Buxton (18) would be close, but Bux has played a dozen less games than Judge due to injury — roughly 50 less at-bats. The Home Run Derby is fast approaching, and these are the likely names on the invite list come July’s All-Star Weekend.

MLB.com: Make Your Picks for the 2022 MLB All-Star Ballot

The College World Series is Set

The last two tickets have been punched! #2 Stanford rocked UConn (10-5) while #14 Auburn pulled the upset against #3 Oregon State (4-3) to earn the final spots in Omaha for the College World Series. They’ll join six teams already en route to Omaha. Notre Dame tapped out the No. 1 team in the land, Tennessee, while Arkansas stunned #10 North Carolina with a walk-off to provide two of the biggest upsets thus far. Here’s what you need to know before the College World Series gets started this week.

How the College World Series Works

After 64 teams enter the bracket in May, only eight remain after a series of elimination rounds. Those eight teams will duel it out in two separate, four-team double-elimination brackets. After each group of four finds a winner, the remaining two teams face off in the best-of-three series to decide the champion.

The Atlanta Braves won their 12th straight game on Monday with a 9-5 victory over the Washington Nationals. The hottest team in baseball got four bombs from Adam Duvall, Travis d’Arnaud, Marcell Ozuna and Dansby Swanson.

A 0-0 draw led to penalty kicks between Australia and Peru with a World Cup spot on the line Monday night. The Aussie won the PKs (5-4) thanks to substitute goalkeeper Andrew Redmayne with a super save to seal the deal.

Father’s Day is just around the corner and as the thinking goes, the Dads of the family are often the hardest to shop for. Here are some of the perfect gifts to make Father’s Day brighter for the Dads who love sports in any and all forms. (NBC Sports)

With one week remaining in the regular season, the USFL playoff field is set. The playoffs, which will be held at Tom Benson Hall of Fame Stadium in Canton, Ohio, begin with the semifinals on Saturday, June 25. (FOX Sports)

Golf’s Everyman has sold himself for millions of dollars to the Saudi-backed golf league, losing his PGA Tour membership and all sense of perspective. Once a man of the people, Phil Mickelson is now only about money and himself. (Sports Illustrated)