Monday Night Football blowouts got the Eagles and Bills riding high after two weeks. More MLB clinching scenarios welcome the hunt for October. Fall is on the menu, and we’re ordering more sports.

Congratulations to our Week 2 winner, Christopher L! Christopher went a ridiculous 13-2 in his Week 2 picks (check your email for prize details). Four others went 12-3 this weekend.

Let’s reset the points! We’ll keep track of our season-long leaderboard as the year rolls on, but you can join the fun at any time for a shot at weekly prizes. Week 3 picks can be made until Sunday. 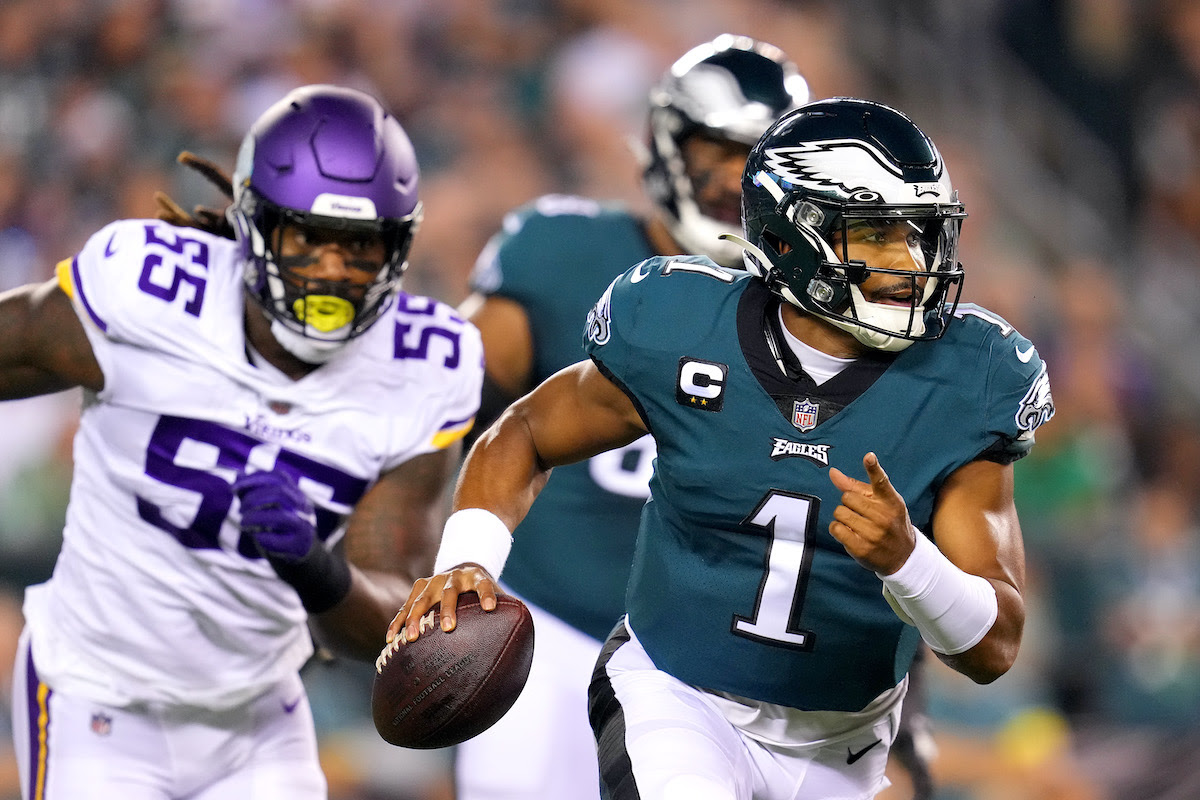 A double dose of Monday Night Football clashes ended relatively early. The Bills put the beatdown on the Titans in yet another eye-popping performance in Buffalo. In the late game, the Eagles got off to a blistering start against the Vikings before cruising to a 21-point win. Both teams are now 2-0, and they look like two of the best teams through Week 2.

Another Josh Allen performance for the ages! The Bills and Titans were all knotted up at 7-7 after the first quarter, but it was all Buffalo the rest of the way. QB Josh Allen (26/38, 317 yards, 4 TDs) lit up the Tennessee defense with a 24-point third quarter. WR Stefon Diggs (12 receptions, 148 yards, 3 TDs) was a ball-hawk all night long. It took the Bills six quarters into the 2022 season before they were forced to punt the ball. Ironically, they recovered a muff then scored a touchdown. Buffalo (2-0) now boasts a 72-17 point differential after two weeks against the Rams and Titans — both teams made the playoffs a year ago. AFC, beware.

The question marks in Philadelphia may have been answered. QB Jalen Hurts was entering a “prove it” season after the team loaded up their receiver corps, and prove it he has. Hurts ignited the Eagles offense with a 14-0 start behind 10 straight completions. Philly led 24-7 at the break before both teams failed to scored in the second half. Hurts was lethal through the air (26/31, 333 yards, 1 TD, 1 INT) and on the ground (11 carries, 57 yards, 2 TDs). He became the second Eagles quarterback to throw for 300 yards and rush for two touchdowns in a single game (Michael Vick, 2010). The Eagles logged three interceptions — two from Darius Slay — and they’re now 2-0. Hurts has accounted for over 700 yards and 4 TDs in two games. 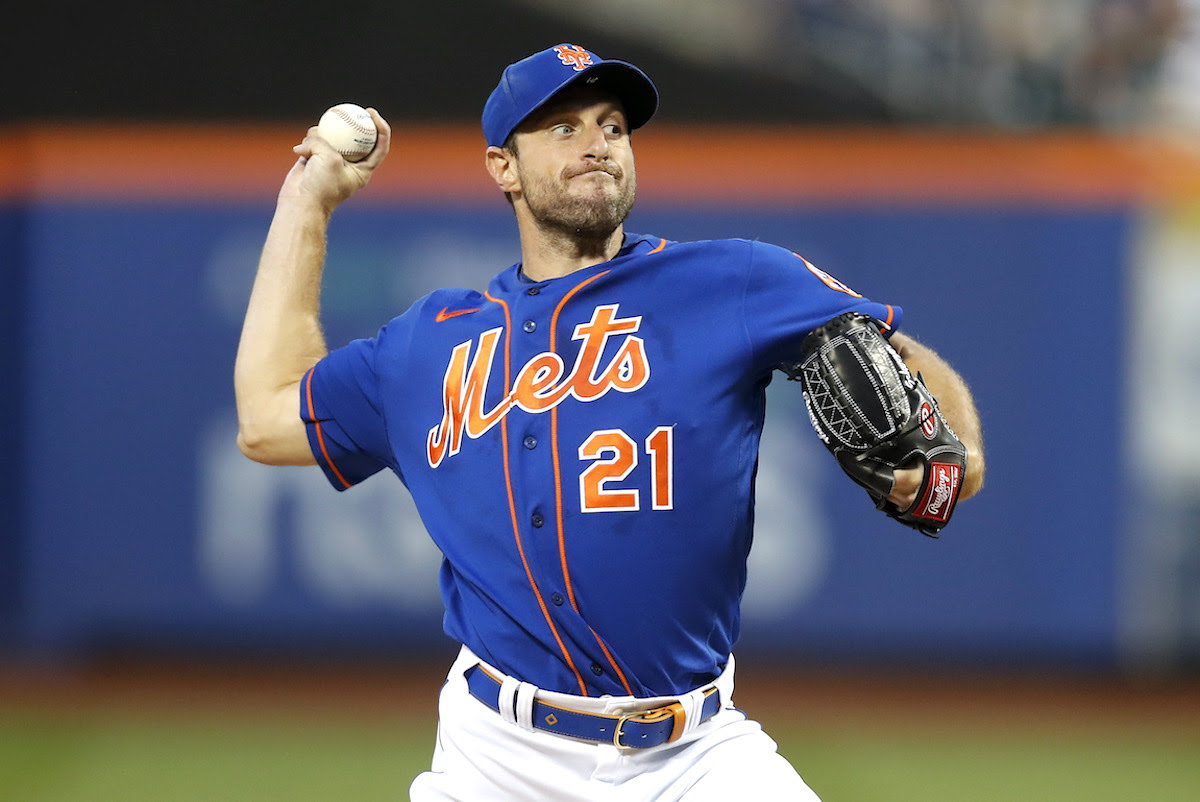 It’s magic number season. If you don’t know what that means, magic numbers are the number of wins needed and losses by the nearest competitor to clinch for MLB teams on the cusp of the playoffs. Monday night saw the Mets nab a playoff berth behind Max Scherzer’s perfect six innings. The Mets beat the Brewers (7-2). Scherzer was pulled due to a pitch count after returning from the IL. Meanwhile, the Astros wrapped up the AL West by shutting out the Rays (4-0). Combined with the Dodgers locking up a playoff spot earlier this month, three teams have now secured a postseason berth. It’ll be a few days until the next playoff spots get locked up. Let’s take a look at where each team stands.

The Cardinals and Braves are next on the clinch list. The Yankees can get there soon, too, but the AL East is getting tight down the stretch. We’ll have daily look-ins as the playoff picture shakes out.

Top-10 Unhinged, But Top-25 Teams Get A Shakeup

A weekend of wild finishes in college football brought chaos to teams 11-25 in the AP Poll, but the Top-10 remains in balance. It appears seven juggernauts are on the way towards another CFB Playoff picture full of powerhouses. The usual suspects are off to blazing starts. Georgia, Alabama, Ohio State, Michigan and Clemson are all hot.

What’s Coming: The Crimson Tide will get tested in October with three ranked matchups, including #10 Arkansas and #11 Tennessee. Clemson gets ranked ACC foes in the next two weeks, including #12 NC State. Georgia should roll through October, and both Michigan and Ohio State will see #14 Penn State as their biggest challenger until November.

The Best in Men’s Tennis

Who’s the best in men’s tennis? It depends how you measure it. Roger Federer, Rafael Nadal and Novak Djokovic all have credible claims to the greatest of all-time. Here are a few ways to consider their gaudy stats. (NY Times)

The clubhouse at Quail Hollow, the host course of this year’s Presidents Cup — which, every two years, pits a team of America’s top players against the world’s best from countries outside of Europe — is a pretty grand manse in and of itself. (Golf.com)

We’re only three weeks into the college football season, but the seats are hot. The stakes are high, the pressure is immense, and the movement, starting with the hiring and firing of head coaches, is reaching a frenzied, unsustainable pace. (Bleacher Report)