Happy Monday, Philly fans. The Eagles are still unblemished (6-0). The Flyers are, too (2-0). The Phillies are heading to the NLCS and the 76ers tip off the NBA season-openers tomorrow night. Get me a cheesesteak and let’s unleash a Philadelphia-focused week of sports. 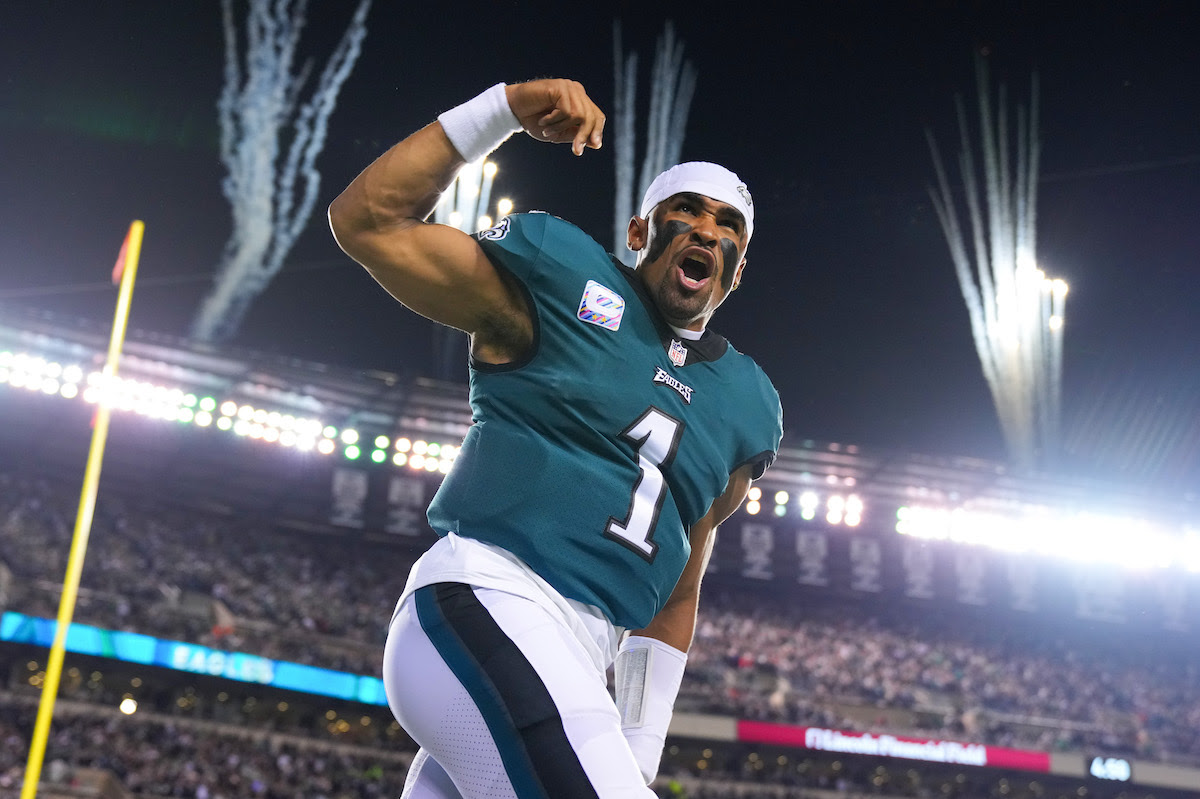 Four must-see matchups had our attention on Sunday in Week 6 of the NFL’s reality TV show, and there was no better reality TV than the scene in Philly on Sunday Night Football. The Eagles hosted the Cowboys in an NFC East rivalry renewed. Both teams entered Week 6 a combined 11-1 with the Eagles (5-0) as the league’s last unbeaten squad. Philly hung 20 points on the Cowboys’ defense in the first half in what looked like an early bedtime, but Dallas responded with 17 unanswered. Enter QB Jalen Hurts (15/25, 155 yards, 2 TDs) who engineered a 13-play, 75-yard drive that ate up seven-plus minutes and put six points on the board. After an interception and a missed field by Dallas, it was party time in the City of Brotherly love. Cowboys QB Cooper Rush (18/38, 181 yards, 1 TD, 3 INTs) finally looked like a backup quarterback. The QB controversy in Dallas is officially over. And the Eagles are flying into the bye week at 6-0.

Bills Beat Chiefs in Rematch: Sunday’s AFC heavyweight fight went back to Arrowhead for the rematch of Chiefs-Bills from last year’s 78-point OT thriller in the playoffs. Fewer points this time around, but another nail-biter. Buffalo scored the go-ahead touchdown with 1:04 to play on a pass from QB Josh Allen to TE Dawson Knox, then intercepted Patrick Mahomes to ice it (24-20).

Giants Escape Ravens to Reach 5-1: The Giants overcame a 10-point 4th-quarter deficit against the Ravens (24-20) thanks to an interception and a game-winning touchdown by RB Saquon Barkley inside two minutes.

Jets Soar Late Against Packers: The Jets took to the ground to blow out the Packers with a second-half blitz (27-10) in one of Week 6’s biggest upsets. New York amassed 179 yards rushing and 2 TDs on the ground to take the air out of the ball against Aaron Rodgers and improve to 4-2 on the year.

Steelers Stun Brady and the Bucs: The biggest underdog in Week 6 pulled off a surprise win on Sunday in Pittsburgh. The Steelers, after losing QB Kenny Pickett to a concussion, bested Tom Brady Brady and the Bucs (20-18) with a defensive effort that left Tampa Bay with five punts, four field goals, and one consolation touchdown on their final possession.

USA Today: 32 Things We Learned From Week 6 of NFL Season 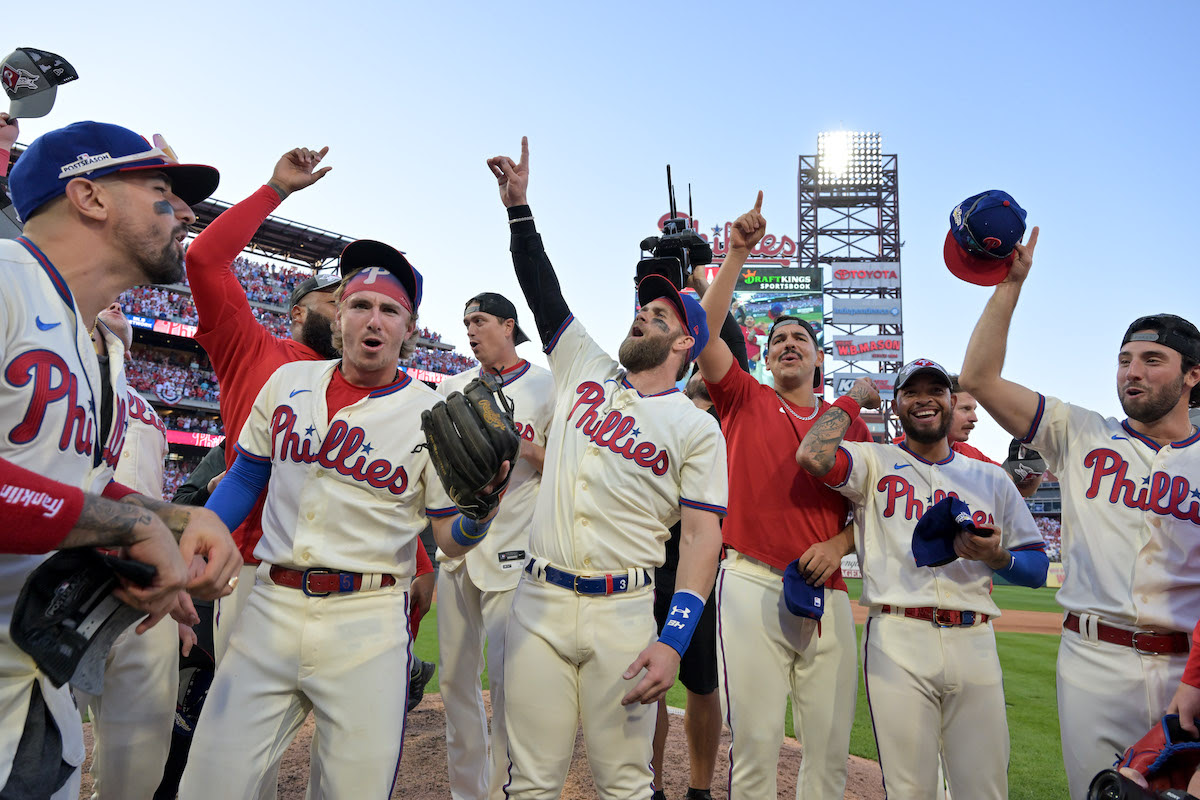 Three of the four Division series concluded over the weekend with a pair of NLDS surprises, but the Yankees and Guardians are heading to Game 5. Despite a 111-win season from the Dodgers and a return postseason visit from the defending champion Braves, both teams are going home via 3-1 upsets in the NLDS. It’s the Phillies and Padres who go head-to-head for the NL World Series bid. In the AL, the Astros completed a gutsy sweep over the Mariners, and a do-or-die Game 4 performance from the Yankees last night set the stage for Game 5 in the Bronx tonight (7:07 pm ET). Here’s everything that went down in the MLB Playoffs to get to where we are now.

The defending champs have been defeated! After a major second-half surge to steal the NL East crown from the Mets, the Phillies have bounced the Braves in shocking fashion. Rhys Hoskins broke the series wide open in game 3 on Friday with a massive 3-run home run that set Philly fans ablaze. Philadelphia rode that momentum into game 4, as their bats stayed hot to take down Atlanta 8-3 to advance to their first NLCS since 2010. PHI Wins Series (3-1)

Another massive upset in the National League saw the Padres, who finished with 22 less wins in the regular season, rout the heavily favored Dodgers in four games. Game 4 was simply magical at Petco Park. After trailing 3-0, San Diego rattled off 5 runs in the seventh to take the lead. In the ninth, Josh Hader struck out Mookie Betts, Trea Turner, and Freddie Freeman in succession to cap off the unthinkable upset. SD Wins Series (3-1)

This may have been the most competitive sweep in MLB history, and game 3 was quite the exclamation point. Neither offense could get anything going for ages, literally. Both the Mariners and Astros went scoreless for about six and a half hours straight, until Jeremy Pena put Houston on the board in the 18th with a solo home run to center. The lone run was all that the ‘Stros needed, as ended Seattle’s cinderella run in the bottom half of the inning to advance to their sixth straight ALCS. HOU Wins Series (3-0)

After dropping Games 2 and 3 on Friday and Saturday, the Yankees turned back to their Game 1 hero with the season on the line Sunday in Cleveland. The Guardians swiped narrow wins to flip the series, but Gerrit Cole’s brilliance keeps the Bronx Bombers alive for one more night. Cole gave up just two runs in seven innings of work with eight Ks while the Yanks got early-inning run support via Harrison Bader’s two-run homer. The Astros await the winner of Game 5 tonight when Jameson Taillon and Aaron Civale take the mound. Series Tied (2-2) 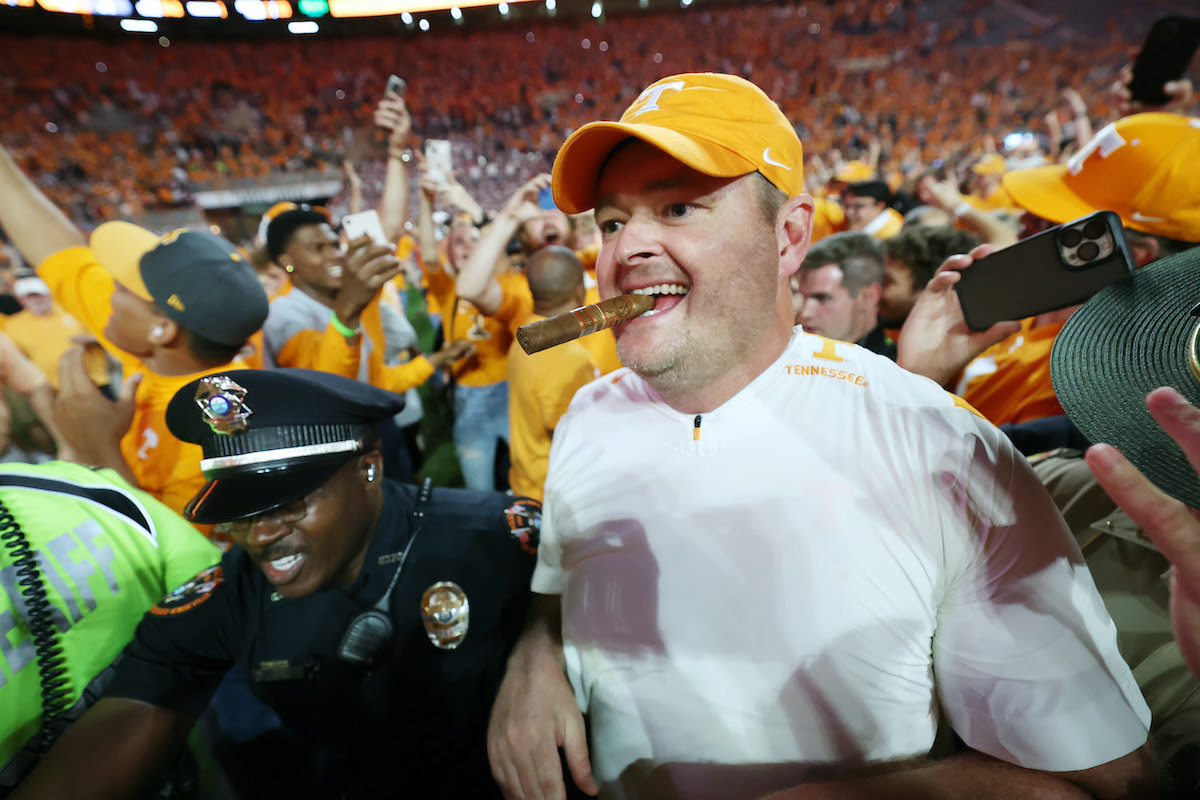 A night to remember in Knoxville! Four top-10 teams fell on Saturday in college football, but no matchup compared to the upset in Rocky Top as No. 6 Tennessee ended a 15-game losing streak to No. 3 Alabama with a walk-off field goal as time expired (52-49). Tennessee QB Hendon Hooker officially submitted his Heisman Trophy ballot with a scintillating performance (21/30, 385 yards, 5 TDs) and an upset over the SEC juggernauts. All five of his touchdown passes went to WR Jalin Hyatt (6 receptions, 207 yards, 5 TDs). Tennessee scored in the first five minutes and didn’t trail until the fourth quarter (49-42). A Hooker touchdown pass with 3:26 left tied the game. Alabama missed the go-ahead field goal from 55 yards before Hooker completed two passes to set up Chase McGrath from 40 yards. The ball knuckled through the goalpost and thousands of fans rushed the field. A cigar-smoking Josh Heupel has the Vols rolling in his second year as the head coach. Chaos in Knoxville, and chaos in the top-10.

SI: Smoked ‘Em: Tennessee Has Celebration for the Ages After Ending Alabama Heartache

Nine teams are off to 2-0 starts or better early in the NHL season, but today’s Philly-focused edition shines a light on the Flyers who rallied from a 2-0 deficit on Saturday to upend the Canucks (3-2). Travis Konecny netted the go-ahead goal in the third period to keep the City of Brotherly Love perfect over the weekend.

Joey Logano used a late rally to pass Ross Chastain in the final laps Sunday at Las Vegas Speedway in the Round of 8. Logano automatically qualified for the Championship 4 of the NASCAR Cup Series Playoffs with one race to go in the Round of 8.

Mohamed Salah played hero once again for Liverpool in a 1-0 win over Manchester City this weekend, striking the winning goal in the 76th minute. The Reds’ victory bumped City off the top spot in the EPL table, making way for Arsenal (9-0-1) to lead the Premier League.

The struggles continue for Barcelona in 2022. The fall ‘El Clasico’ with Real Madrid was another lopsided defeat as Los Blancos handed Barca a 3-1 loss. Karim Benzema (12’) and Federico Valverde (35’) gave Madrid a 2-0 lead early on in a match that was never in doubt.

Keegan Bradley is a winner on the PGA Tour again after a four-year wait. Bradley (-15) used a 2-under final round to pass Rickie Fowler (-14) Sunday at the Zozo Championship in Japan. He finished with a one-stroke win via tap-in par on the 18th before tears after a long-awaited return to victory.