The Bryce Is Right

I need a pulse check. Sunday’s Sports Equinox showcased 38 games across all five major American professional sports leagues, and it was glorious. Today’s edition looks a little different as I attempt to capture all the action.

The World Series matchup is set, and one team’s dream postseason run continues. Let’s start with the games that set the stage for the Fall Classic.

The Bryce is Right 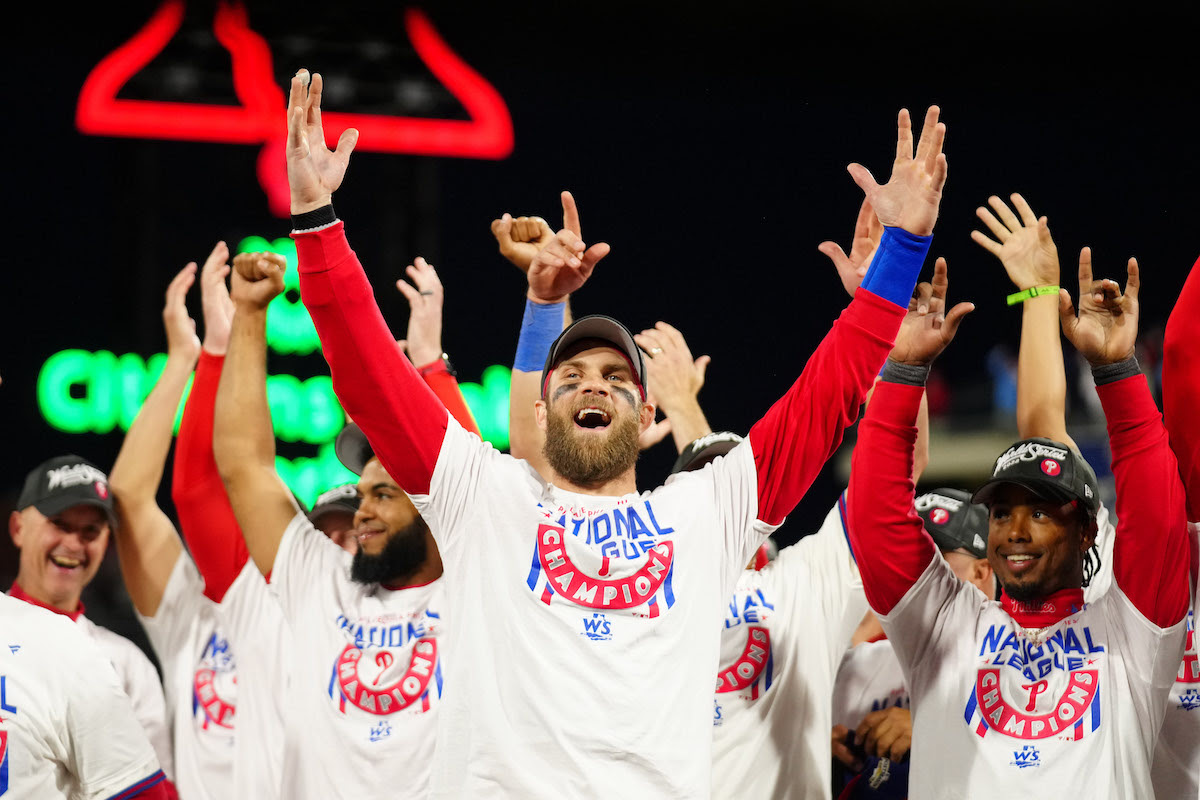 The Phillies are back in the Fall Classic! After a rollercoaster season, the National League’s 6-seed rolled through the playoffs and buried the Padres in the NLCS (4-1). Sunday’s Game 5 saw the Padres take a 3-2 lead in the 7th inning in what looked like a swing game that could turn the series. Instead, with one on in the 8th inning, Bryce Harper hit a home run that sent Philly into a frenzy and flipped the scoreboard. The Philly bullpen closed it out after another spectacular outing from Zack Wheeler (6 IP, 8 Ks, 3 Hits, 2 Runs). And at long last, the  Phillies are heading back to the World Series for the first time since 2009.

The Harper Homer: Harper’s 8th-inning blast was undoubtedly the biggest home run in the 30-year-old’s career. He has 5 HRs and 11 extra-base hits (franchise record) this October. He also took home the NLCS MVP award after hitting .400 with 2 HRs and 5 RBIs in the series.

Phillies on Fire: Philadelphia won just 87 games en route to the 6-seed in the National League, but they’re 9-2 in the playoffs. Next up? A date with the AL’s top seed.

Watch: Phillies Beat Padres to Close Out NLCS in Game 5 (4-3)

They’re still perfect in Houston! The Astros won yet another one-run contest in Game 4 Sunday night in the Bronx with a 7th-inning comeback. The Yankees took a 5-4 lead on Harrison Bader’s solo shot in the 6th inning, but the ‘Stros fired back with two runs in the 7th off the bats of Jose Altuve, Jeremy Pena, and Yordan Alvarez. Pena finished the day 2-for-4 with 3 RBIs and the ALCS MVP honors. Down to their final out, the Yankees’ season fittingly came to an end with Aaron Judge at the plate, but a ground-out sealed the deal. The Astros are heading to their fourth World Series in six years.

Houston, We Have Perfection: While it was the Dodgers who entered the playoffs with 111 wins and the top overall seed, the Astros were the hottest team in baseball over the final third of the season. They’re a perfect 7-0 in the postseason with six of those games decided by two runs or less (four games decided by just one run).

The Fall Classic is set. It’s Astros vs. Phillies for the 2022 title of World Champions.

B/R: Phillies’ Bryce Harper Has Lived Up to the Impossible Expectations 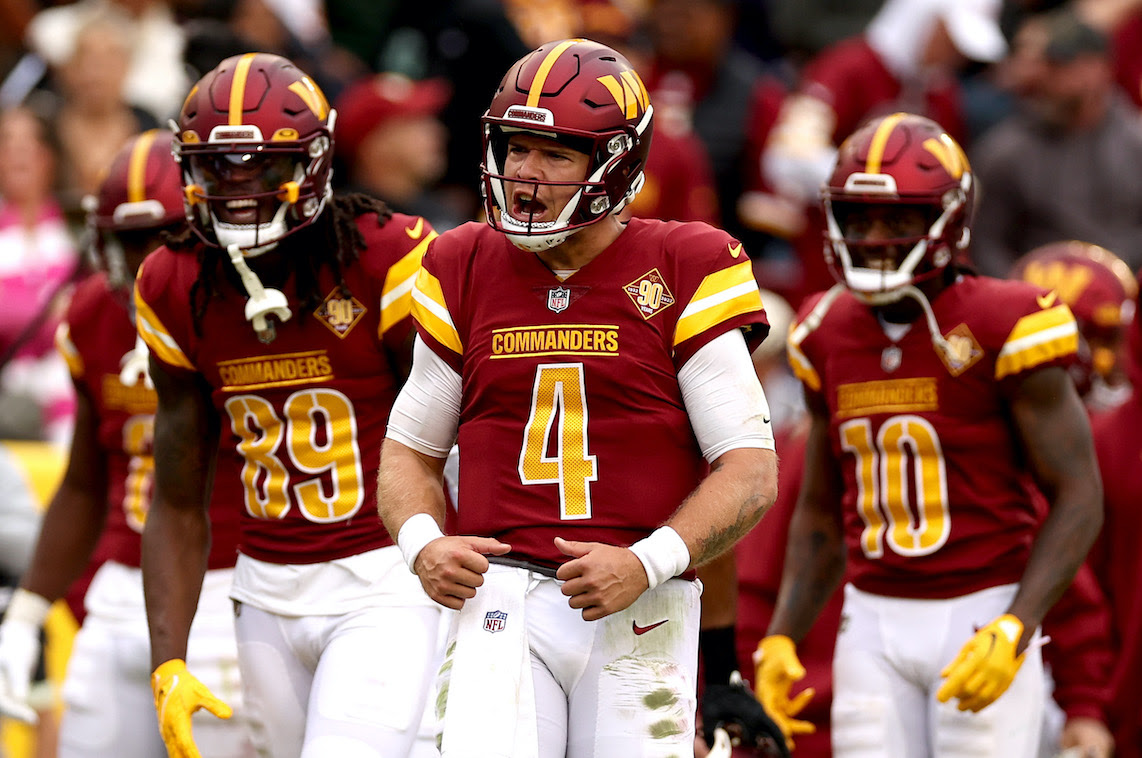 Major Upsets & Standout Performances From Week 7 in the NFL

Another NFL Sunday has come and gone, and we have more questions than answers. Are Tom Brady and Aaron Rodgers finally slowing down? Is the NFC East really this good? And just how much of a fluke was the Bengals’ 0-2 start? Week 7 had a pair of stunning upsets and three of the best teams in the league on a bye week. Here are five of the top storylines as the 2022 season nears the midway point.

Brady & Rodgers Get Upset: The two legendary QBs are going through a rough patch in October. Tom Brady and the Bucs were upset by the struggling Panthers on Sunday (21-3). Aaron Rodgers and the Packers lost to the Commanders in a stunner (23-21). That means Taylor Heinicke (Washington) and P.J. Walker (Carolina) just took down the GOATs.

Cowboys Win in Dak’s Return: Dallas put the hurt on Detroit in QB Dak Prescott’s return from a thumb injury that kept him out since Week 2. The Cowboys scored two touchdowns in a runaway 4th quarter. Prescott went 19-for-25 with 207 yards and 1 TD, and Dallas is now 5-2 with their quarterback healthy.

Burrow’s Bengals Back in Form: After a surprise run to the Super Bowl last season, the Bengals are beginning to bounce back after an 0-2 start. QB Joe Burrow (34/42, 481 yards, 3 TDs) played his best game of the season, tossing nearly 300 yards and three touchdowns to WRs Tyler Boyd and Ja’Marr Chase in the first half of a blowout against the Falcons (35-17). Cincy has won four of their last five.

Josh Jacobs Runs Wild: The best running back performance of the week belonged to Raiders RB Josh Jacobs (23 touches, 155 yards, 3 TDs). Jacobs now has three games this season with 150-plus yards and a touchdown to set multiple franchise records. Las Vegas beat Houston (38-20) to get their second win in three games. 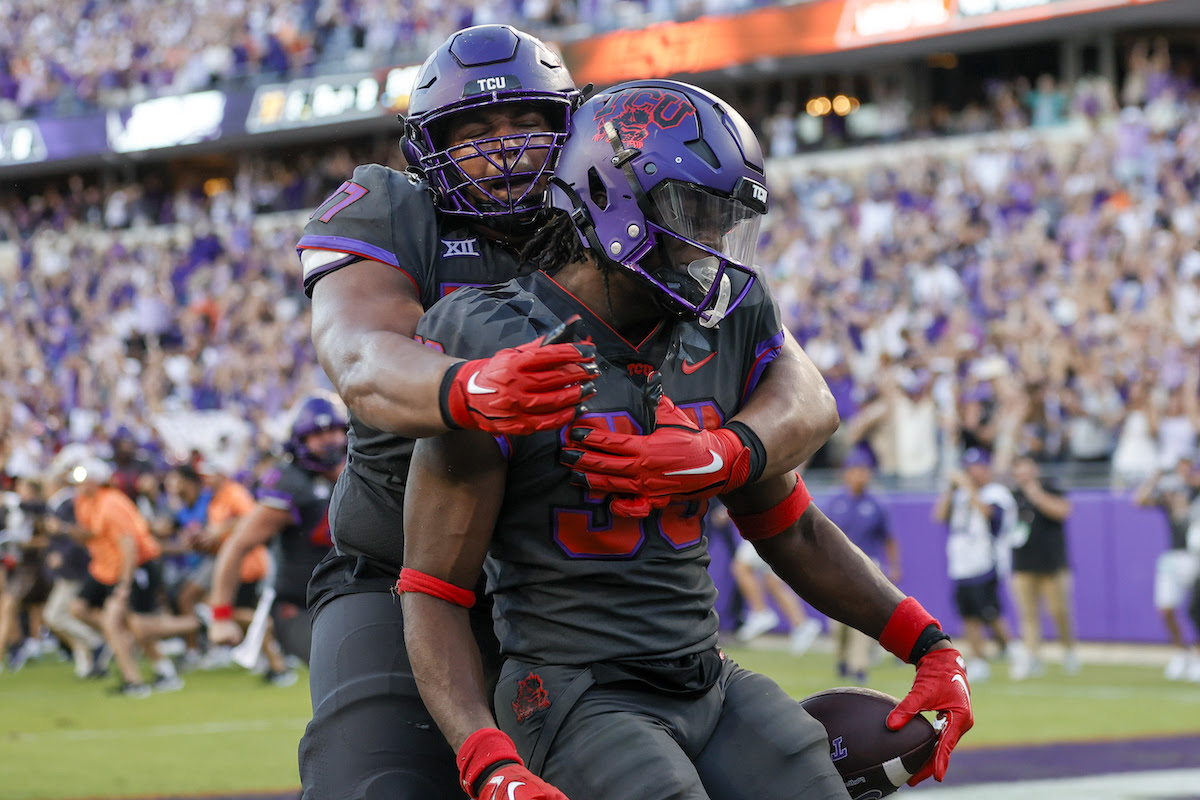 The top six teams in the land were winners over the weekend despite a scare for Clemson. The Tigers needed a late rally to hold off Syracuse and remain undefeated. At the back of the top 10, No. 7 Ole Miss got upended by LSU and No. 9 UCLA relinquished the Pac-12 lead to No. 10 Oregon behind a five-touchdown performance from Ducks QB Bo Nix. Six playoff contenders remain undefeated, including the surprise Big 12 leaders from TCU. About a dozen one-loss teams still have high hopes, including Oregon and Oklahoma State who bounced back after losses, but the playoff picture is getting clearer by the week. Here’s a rundown of Saturday’s action, and the new rankings as a result:

The Melee in Toronto 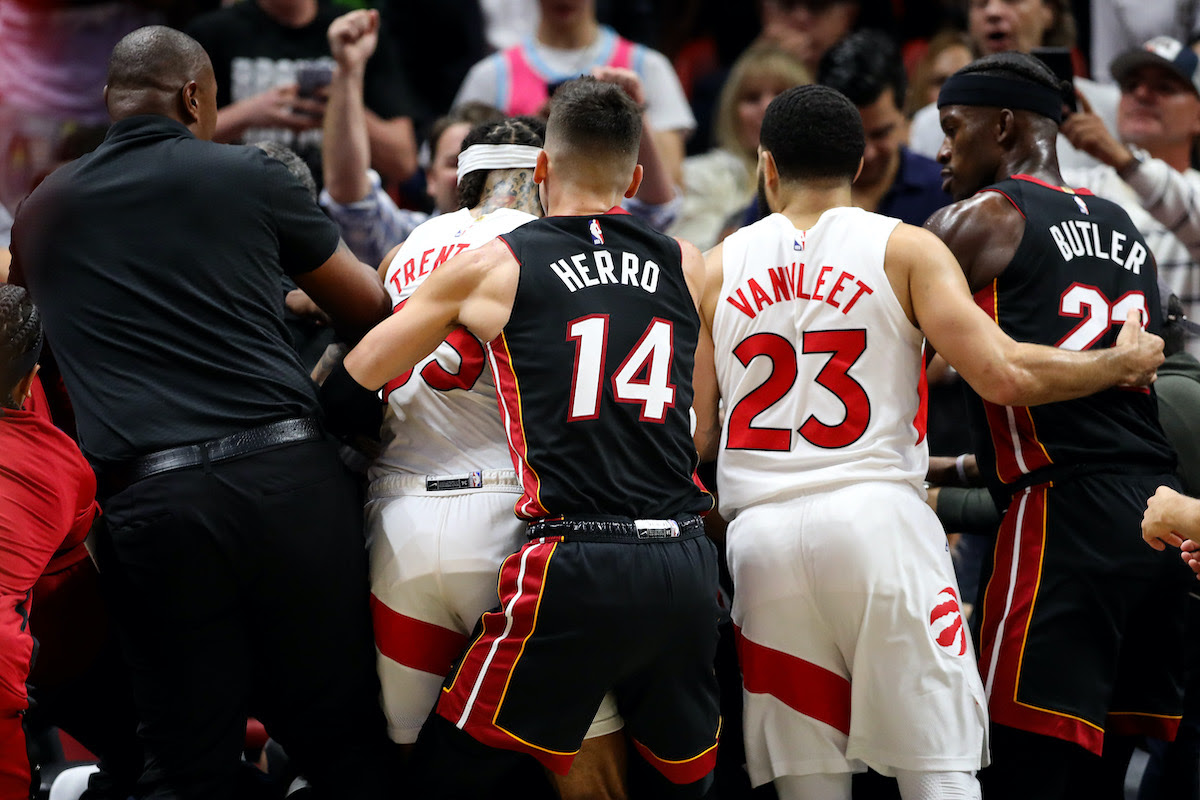 Fines & Suspensions Coming After Raptors-Heat Melee That Spills Into Stands

The Heat narrowly survived a massive comeback by the Raptors on Saturday in Toronto, but the story of the game wasn’t the game. In the third quarter, a scuffle between Miami’s Caleb Martin and Toronto’s Christian Koloko turned hostile during a rebound box-out. Martin ended up tackling Koloko into the front row on the baseline. Luckily no one was injured, but a busy opening weekend in the NBA brought out the competitive nature across the league.

All of Sunday’s Goals

All of Saturday’s Goals

All of Friday’s Goals