The Goose is Loose

Ducks on the pond… Fowl ball… Wednesday night in the NLDS brought out all the baseball puns. Yes, it was a day full of sports action, but the spotlight belonged to the goose who wandered into Dodger Stadium and broke the internet. I’ve seen squirrels in the end zone and bats in the rafters, but a goose on the diamond is a first.

The Goose is Loose in Game 2 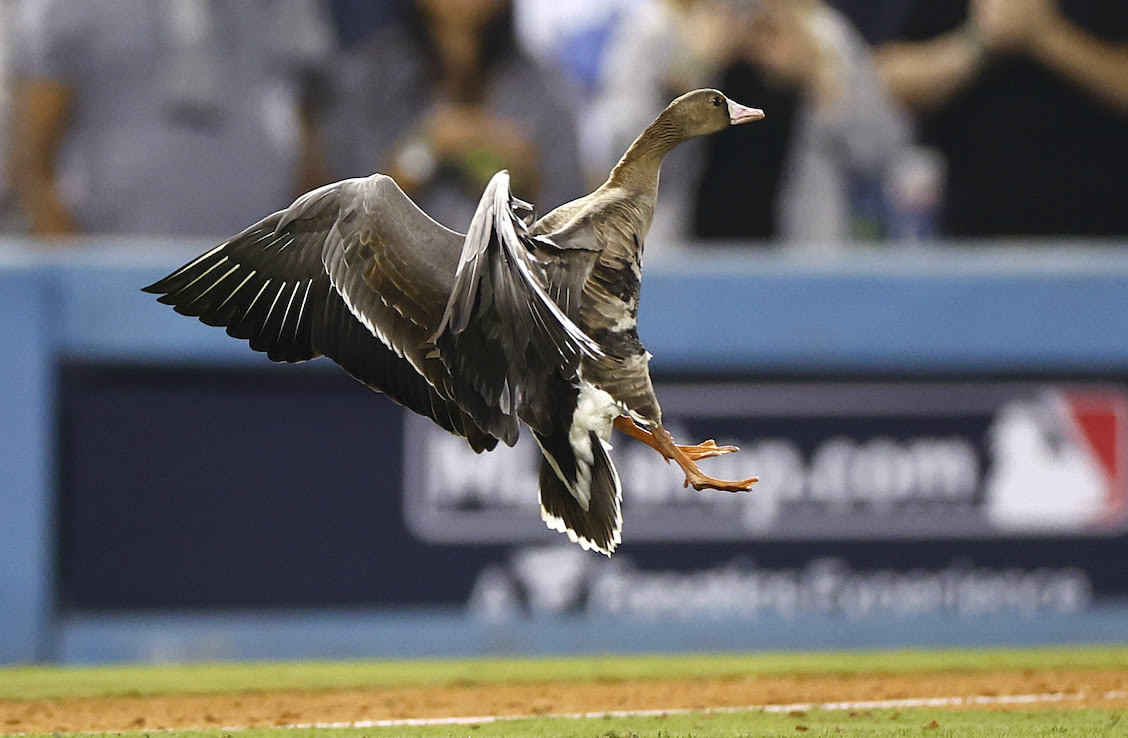 Game 2 of the NLDS saw bounce-back performances from the Braves and Padres on Wednesday night. No sweeps will be had in the National League this round. But there was an unexpected guest at Dodger Stadium — a goose on the loose! It’s anyone’s guess where each series is heading now that we’re all knotted up at 1-1. All we learned on Wednesday is that the internet loves when animals interrupt sports. Now, here’s baseball:

The Braves bounced back in Atlanta to square things up with the Phillies thanks to a three-run sixth inning that made the difference in a defensive battle. Phillies’ ace Zack Wheeler gave up all three runs in the sixth before his night ended. Braves’ bats from Matt Olson, Austin Riley and Travis d’Arnaud delivered the RBIs in succession. Atlanta starter Kyle Wright was brilliant, delivering six Ks and just two hits over six innings en route to the shutout. It was Philly’s first loss of the postseason. Series Tied (1-1)

The Padres used a late-game takeover to swipe Game 2 in Los Angeles. The Dodgers started hot with solo home runs in each of the first three innings by Freddie Freeman (1st), Max Muncy (2nd) and Trea Turner (3rd). The game was tied 3-3 before the Padres went ahead in the sixth and Jake Cronenworth delivered the knockout punch with a home run in the eighth. Both Yu Darvish (SD) and Clayton Kershaw (LAD) gave up three runs each in five innings of work. Series Tied (1-1)

FOX Sports: A Goose is on the Loose at Dodgers Stadium (Video) 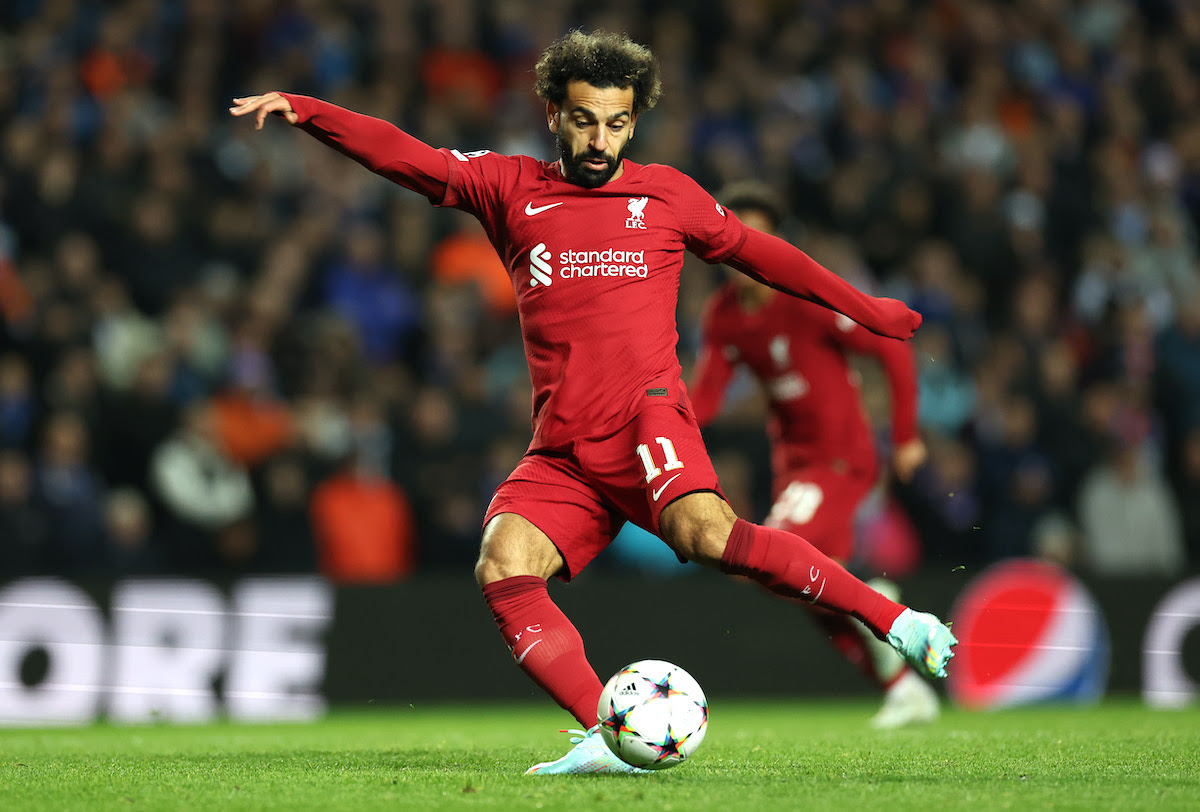 Another afternoon of soccer widened the gap in the UEFA Champions League Group Stage. Two teams are through to the Round of 16 — Napoli and Bayern Munich — after dominating wins. Meanwhile, Liverpool pounded Rangers (7-1) behind Mohamed Salah’s hat-trick in a six-minute window to put the Reds in control and one point from the knockout stage. Tottenham secured a crucial victory to take the lead in Group D, and Barcelona’s draw means the Spanish juggernauts are on the brink of elimination. Two matches remain to determine the knockouts.

SI: Barcelona Risked It All Only to End Up on Brink of Early Champions League Elimination 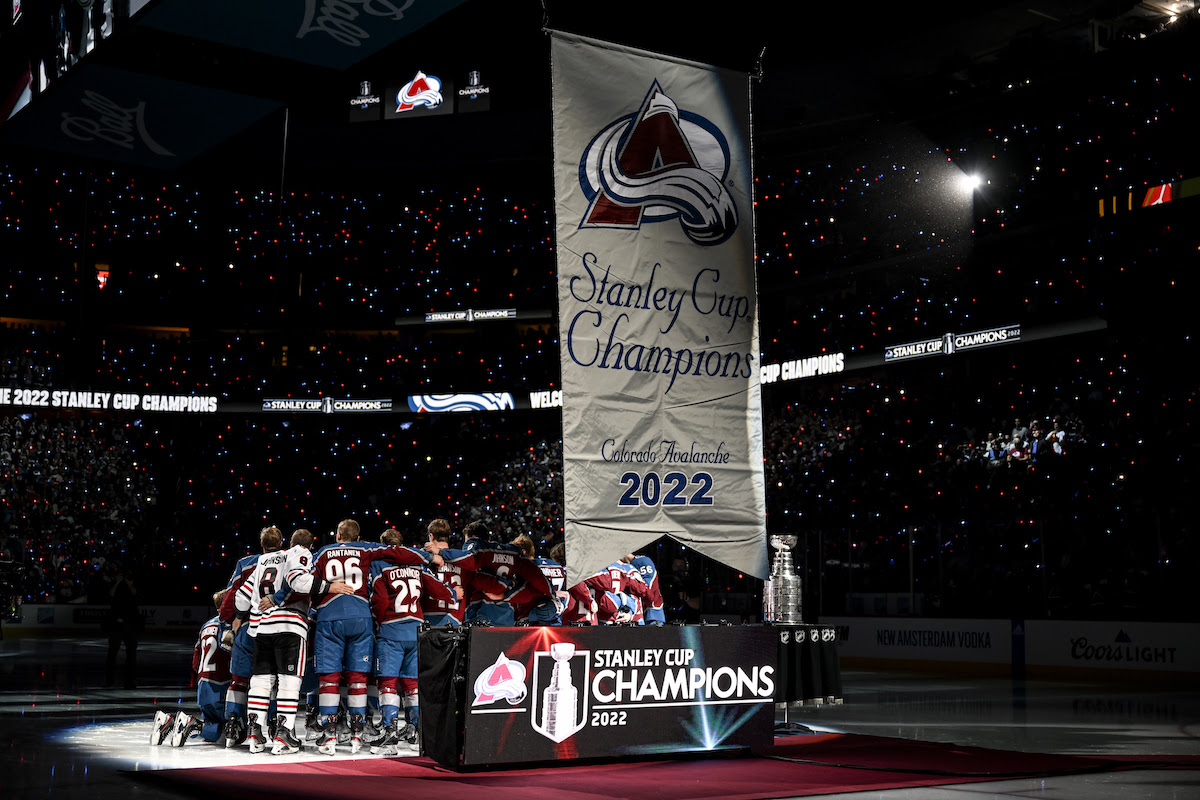 The return of hockey came Tuesday night with a pair of NHL openers, but five more games took the ice on Wednesday. Among them, a celebration for the defending Stanley Cup champions was the highlight. Four months after the Colorado Avalanche won their third Stanley Cup, they raised a banner to launch the 2022-23 campaign and picked up right where they left off. The Avs got two goals apiece from Artturi Lehkonen and Valeri Nichushkin as they blitzed the Blackhawks with four power-play goals in a 5-2 win. Hockey is back. So are the champs. Let’s play 81 more between now and April.

Five weeks of the NFL season are in the books. It’s certainly too early to go too in-depth into analyzing the playoff picture, especially with so many 3-2 or 2-3 teams scattered across the league. (Yahoo! Sports)

The Biggest Questions in College Basketball

There are hundreds of variables that will ultimately factor into which team wins the 2023 national championship six months from now, but in the preseason, it’s all on paper, and easier to boil down a team’s fatal flaws to one or two items. (ESPN+)

When the 2022 Major League Baseball postseason ends in a few weeks, some of the game’s best players will be on the open market. Those players have some tough decisions to make in free agency, but it will ultimately come down to fit. (Bleacher Report)