My Way Or The Shai-Way

If you click on one thing in today’s edition, make it this epic poster dunk by Arkansas’ Trevon Brazile. “There are children watching.” The college basketball dunk of the year just happened in the first month. You’re welcome… 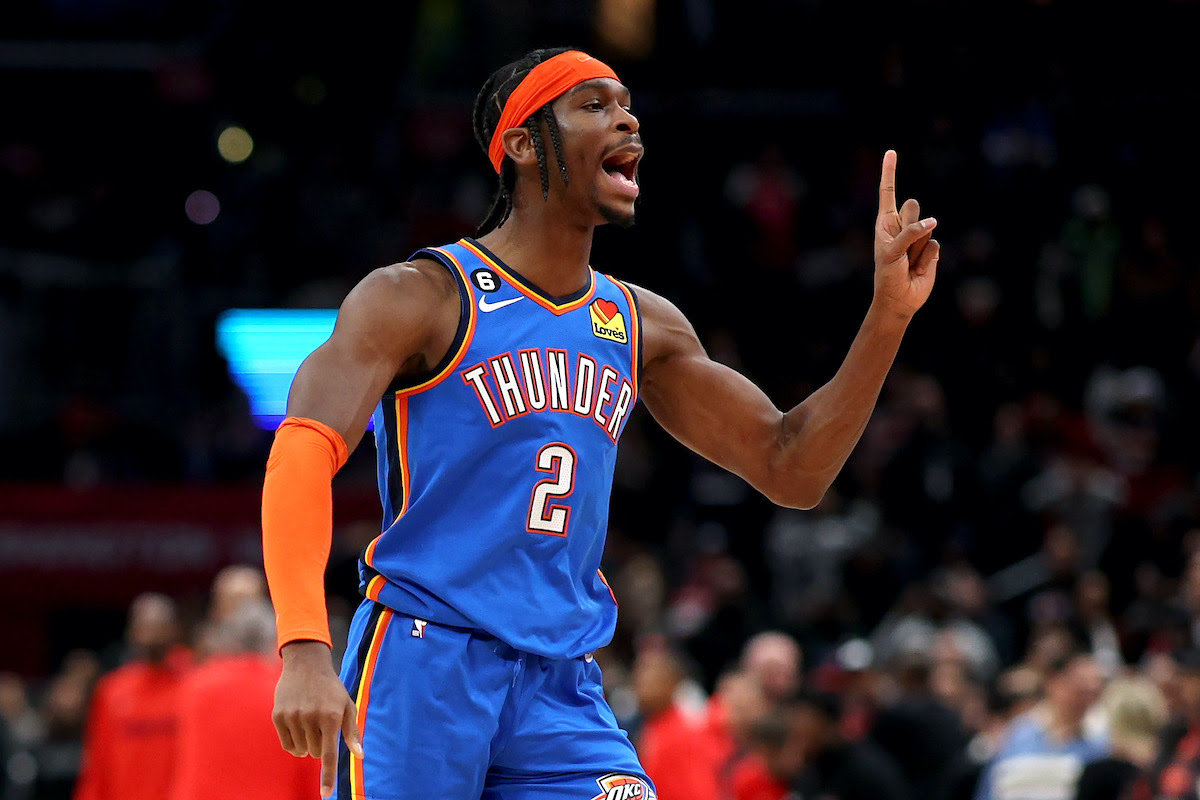 The season of Shai hits a new high! Among the NBA’s early-season storylines is the new shining star in Oklahoma City. Shai Gilgeous-Alexander is quietly having his best season yet, but the 24-year-old guard made things loud on Wednesday night. SGA packaged a 42-7-6 night and knocked in the game-winning 3 to lift the Thunder over the Wizards (121-120). He’s averaging 31.5 ppg on the season after scoring 37, 37, and 42 in his last three outings. OKC is now 7-8 after winning three of their last four, and SGA is finding his footing as a rising star.

Celtics Extend Streak to 8: Boston’s win streak grew to eight with a dominant win over the Hawks (126-101) thanks to a balanced scoring attack. Outside of two single-digit losses to the Cavs and a bad night against the Bulls, the C’s are having a near-perfect start.

Ant & KAT Pop Off: The Timberwolves won their second straight by topping the Magic (126-108) courtesy of a pair of 30-point nights from Anthony Edwards (35) and Karl-Anthony Towns (30). MLB awards week rolled on with Wednesday’s announcement of the Cy Young winners. Justin Verlander (AL: Astros) and Sandy Alcantara (NL: Marlins) were both unanimous winners. Verlander was finally able to get that elusive World Series victory to cap off his Cy Young campaign, while Alcantara was the king of the complete game in 2022. It was the first time both Cy Young winners were unanimous selections since 1968.

The 39-year-old Verlander turned heads in 2022 with a comeback season for the ages. After returning from Tommy John surgery, JV showed no signs of aging as he helped lead the Astros to the World Series, becoming just the 11th pitcher in MLB history to win the award three times or more. He’s also the fifth-oldest pitcher to win the Cy Young. Verlander posted the lowest ERA (1.75) by an AL pitcher since 2000 (Pedro Martinez). He finished with a record of 18-4 with 175 Ks.

The 27-year-old Dominican Republic native delivered Miami its first-ever Cy Young award with league-high 228-plus innings. His six complete games were the most seen in the majors since 2016. He ranked top five in the NL in all major categories — ERA (2.28), strikeouts (207), and starts (24). He finished with a 14-9 record.

The Kings improved to 11-7-1 by shutting down the Oilers (3-1) on the back of Trevor Moore’s first career hat trick. Viktor Arvidsson assisted on all three goals, and Los Angeles is flirting with the early lead in the Pacific.

An early-season stunner in college hoops! The 11th-ranked Longhorns not only beat #2 Gonzaga last night, but they dominated the Zags (93-74). Tyrese Hunter was red-hot (26 points) with five 3s. Expect a shakeup in the NCAA rankings.

The only ranked clash in women’s hoops featured a lopsided blowout as #25 Utah completely erupted for 124 points against #16 Oklahoma (124-78). Utah had six players in double figures, including three with 20-plus.

With Week 10 in the rearview, every NFL team has played at least nine games. While we’re not quite in the homestretch of the playoff race, several have emerged as Super Bowl favorites. (Bleacher Report)

You never know who’s going to shine at the World Cup. Ahead of the tournament, we chose favorites to win the most prestigious individual awards: the Golden Boot, Golden Ball, and Young Player Award. (FOX Sports)