It’s time for some playoff football, and we’re going deep into preview mode for each game on the schedule for Super Wild Card Weekend. Two AFC teams are without starting QBs and the Eagles and Chiefs are waiting in Round 2. Who can win 3-4 games in a row and capture the Lombardi Trophy? Let’s find out. 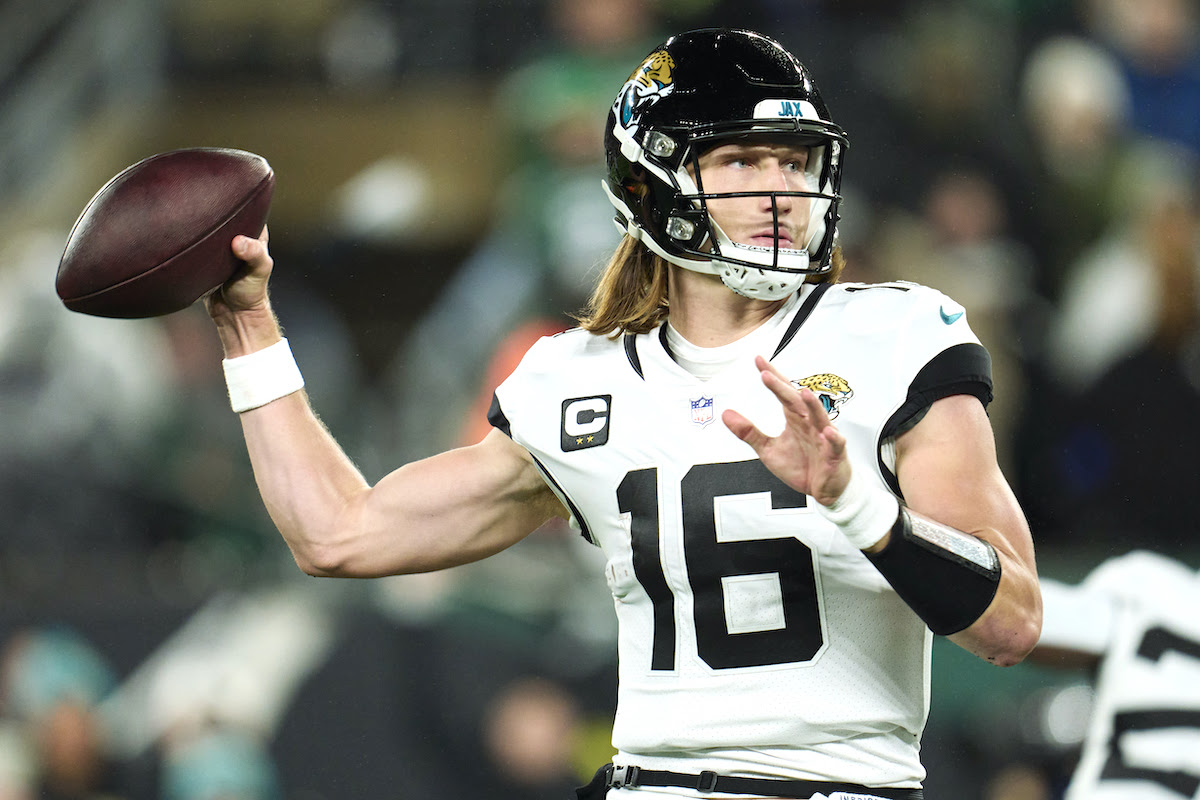 It’s time. Are you ready? The NFL’s 18-week sprint to the postseason has concluded, and 14 teams are left standing at the gates of Super Bowl LVII. The new playoff format features byes for the 1-seeds — Eagles (NFC) and Chiefs (AFC) — while Super Wild Card Weekend trims the field from 14 to 8. The weekend ahead holds three inter-divisional rivalries with postseason flavor, and it concludes with Brady and the Bucs hosting the Cowboys. Does it get better than that? Let’s go deep into each playoff matchup with breakdowns, x-factors, odds, and more…

Geno Smith and the underdog ‘Hawks snuck into the postseason in Week 18, but their consolation prize is a trip down the coast to San Francisco where the 49ers have won 10 straight games. Third-string QB Brock Purdy (1,374 yards, 13 TDs, 4 INTs) has stepped in and managed the 49ers efficiently while letting the offensive weapons and defensive juggernauts take over games. The addition of RB Christian McCaffrey — 10 TDs in 10 games — has lifted San Fran to new heights. The Niners won both regular-season meetings. Expect a quick rout in the Bay, but anything can happen.

The Chargers enter the playoffs winners in four of their last five, but they haven’t faced a tough opponent since before Thanksgiving. Meanwhile, the Jaguars ended the year with five straight wins as Doug Pederson and Trevor Lawrence have appeared to figure things out. Justin Herbert (4,739 yards, 25 TDs, 10 INTs) and Lawrence (4,113 yards, 25 TDs, 8 INTs) boast comparable numbers and team records, but Jacksonville blasted L.A. in their head-to-head matchup back in September (38-10). Lawrence threw for 3 TDs in the rout. The Chargers are the favorites, but it’s in Jacksonville. We like the upset here.

The most lopsided matchup will take place in Buffalo where the Bills welcome the Dolphins to upstate New York in January weather. Without QB Tua Tagovailoa due to concussion protocols, Miami will turn to third-string rookie QB Skylar Thompson. The Bills are riding a nine-game win streak and the energy of Damar Hamlin’s recovery towards a storybook playoff run. QB Josh Allen (42 total TDs) has become a bonafide superstar in Year 5, and he has the Bills ready to explode in Round 1 of the postseason. We’re calling this an early no-contest.

The third entry of the NFC East stuttered into the postseason with a 2-5-1 record in the second half of the season. One of those losses came in Minnesota on a last-second field goal (27-24). The Vikings have been a great story all year long, but QB Kirk Cousins is 1-3 in his career in the playoffs — but that was before the emergence of WR Justin Jefferson — and the Giants will have RB Saquon Barkley getting his first taste of playoff football. Barkley had 133 yards and 1 TD against Minnesota’s suspect rush defense in December. We like another tight one with the Giants pulling off the game-winning field goal this time around.

The third-hottest team to open the postseason resides in Cincinnati where Joe Burrow and the Bengals haven’t lost since October. Baltimore is still without QB Lamar Jackson who missed his third week of practice with a lingering knee injury. He’s unlikely for Sunday’s game, which gives Burrow and the Bengals all the juice at home. Burrow’s postseason pedigree speaks for itself after leading LSU’s title run and the Bengals to the Super Bowl last season in his second year. We’ve got Cincinnati by a wide margin.

The most enticing game to pick this weekend falls on Monday where Tom Brady and the Bucs host America’s team. The Cowboys are the better squad with a defense that has turned heads in spurts this season, but their inconsistency brings question marks. The Bucs have been rocky all year. They’re the only team under .500 in the playoffs, but Brady in January needs no over-analysis. Dak Prescott (15 INTs) leads the NFL in interceptions this season despite missing multiple weeks. I don’t trust Dallas in the playoffs, especially in Bradyland. The Cowboys are favored, but we like the Bucs in a vintage Brady-comeback nail-biter.

*All links to preview videos

SI: NFL Playoffs Preview: How All 14 Teams Can Reach the Super Bowl 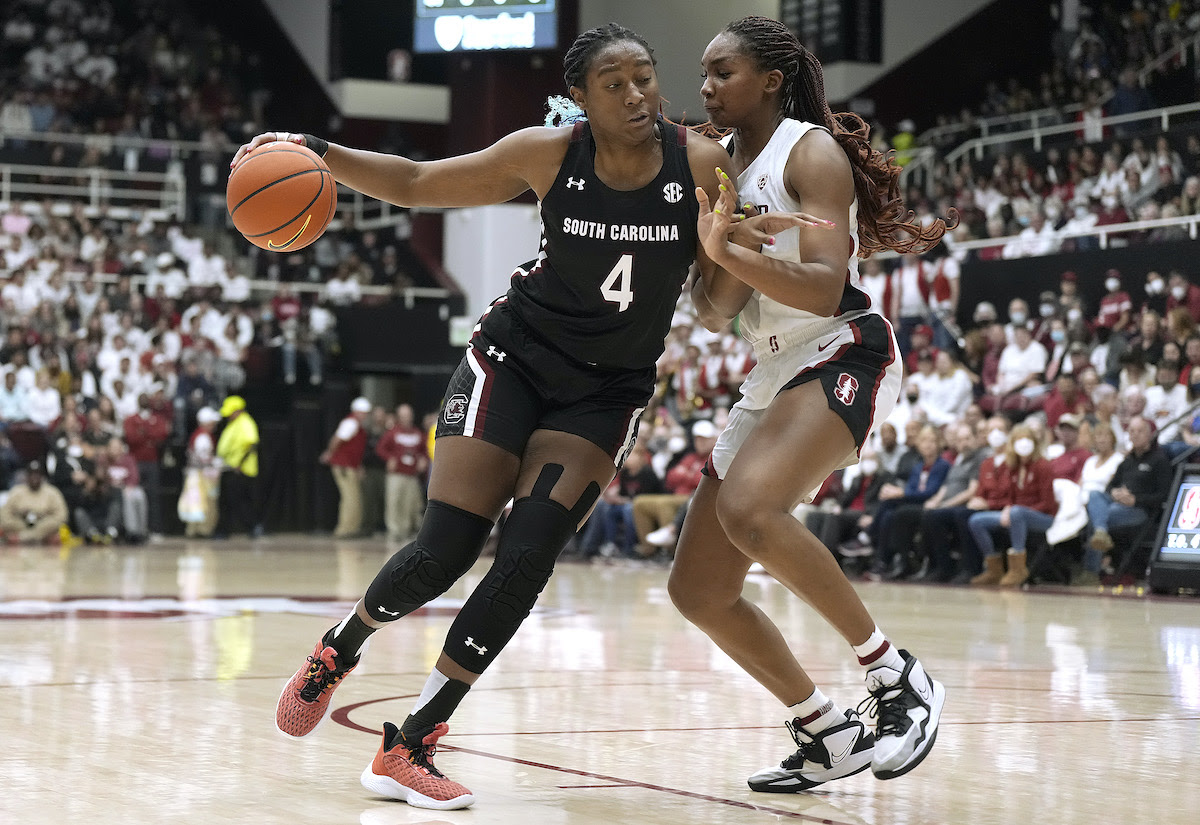 As another week comes to a close, the NCAA Tournament is drawing near. Selection Sunday is just two months away, and we now have a clear picture of who’s who in college hoops. Here’s a look at the top four lines if the tournament brackets were revealed today, plus highlights from last night’s action.

Partner: Looking for the best college gear? Homefield is a trusted Sportsletter partner that creates vintage-inspired designs that properly tell the unique story of each university. Our team can personally attest with the multiple products we’ve purchased, Homefield is as stylish and comfortable as it gets. Find unique, premium shirts, hoodies, and more from over 150 schools for you and your family today. Shop Homefield Now

Passing the baton! Luka Doncic (35-14-13) and LeBron James (24-16-9) went head-to-head in the battle of great point forwards on Thursday between the Mavs and Lakers. After things got heated between Doncic and Russell Westbrook, the game needed two overtime periods to find a winner before the Mavericks came out on top (119-115).

Didn’t see that coming? The Kraken extended their win streak to seven on Thursday by taking down the toughest team in the land. Seattle shut out Boston (3-0) to end the Bruins’ 14-game point streak and deliver the B’s first home loss of the season. Martin Jones made 27 saves in the blank sheet, and the Kraken is still streaking.

PGA: 3 Atop Leaderboard at Sony Open

The PGA Tour makes its next stop at Wai’alae Country Club this weekend for the Sony Open, and three players are atop a crowded leaderboard after Round 1. Taylor Montgomery, Chris Kirk, and Jordan Spieth are all 6-under in Hawaii’s second stop in two weeks.

While we’re still roughly a month from the reporting dates for pitchers and catchers, the 2022-23 offseason is largely over in terms of remaining talent to be had. A surprise blockbuster trade is possible, but the premium free agents are all spoken for. (CBS Sports)

It’s not your imagination: NBA offenses are purring at an all-time high, fueled by nightly individual statistical lines that seem almost cartoonish. A player has put up 50 or more points in a game 14 times so far this year… with three months to go. (FOX Sports)

The January transfer window is here and Premier League transfers are happening all the time. But where does each of the 20 Premier League clubs need to strengthen? What kind of player, or players, do they need? (NBC Sports)

Welcome to the NFL Playoffs! Super Wild Card Weekend is on the way with games on Saturday, Sunday and Monday. Reminder: The Sportsletter will not be published on Monday in honor of Martin Luther King Jr. Day. Here’s everything we’re watching on this three-day weekend. Enjoy!