The NFL playoffs are just a few days away, and we’ve got power rankings for all 14 teams. Plus, a twist in the wildest story of MLB free agency, and a busy night in the NBA and NHL keep us going through the winter drought. All that and more in today’s mid-week edition. 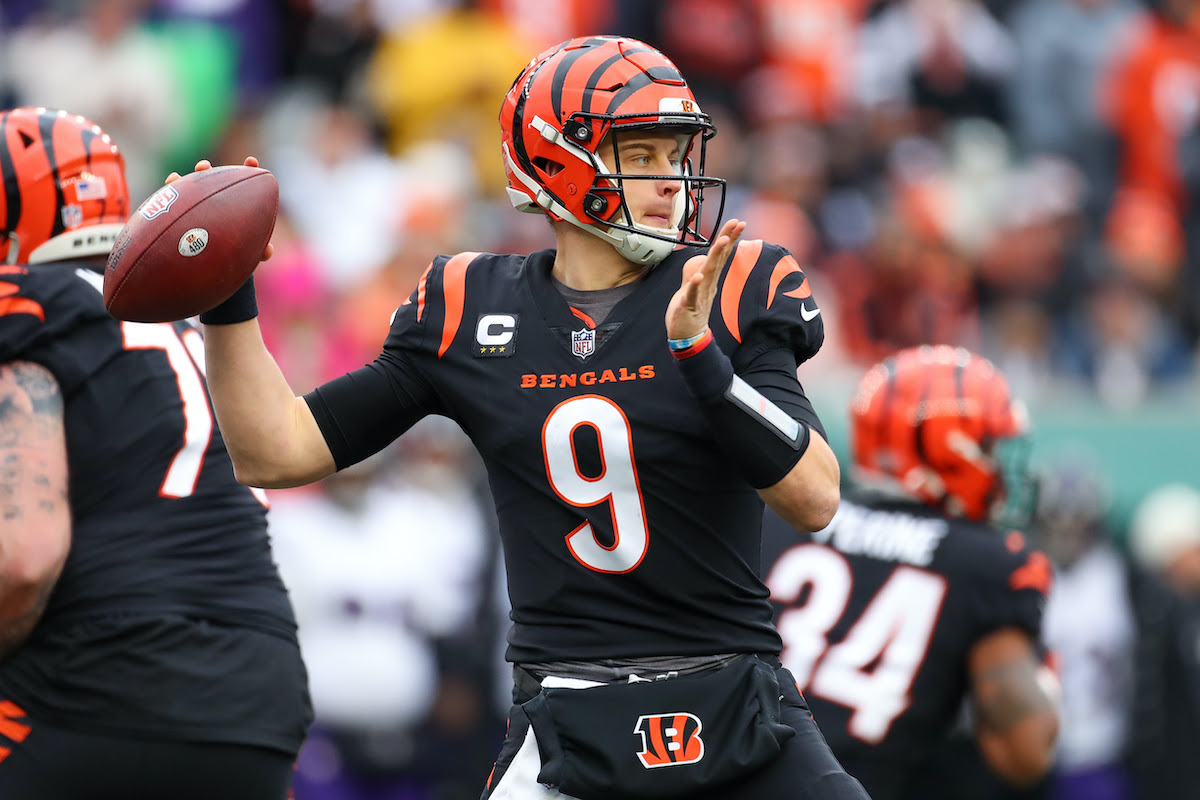 With the NFL postseason a few days away, the playoff power rankings are here. We’ve seen the AFC’s top three teams in a dogfight for playoff seeding despite an unprecedented schedule disaster to end the year. The Bengals (8) and 49ers (10) are the league’s hottest teams with massive win streaks heading into the playoffs, but the Chiefs, Bills, and Eagles had better seasons start-to-finish. Our only knock on the Niners is the belief in Brock Purdy under playoff pressure. But those five teams are head-and-shoulders above the rest in our postseason list. The Jaguars and Seahawks are also dark horses who snuck in on Week 18 while the Bucs, Dolphins, Giants, and Ravens leave us with more questions than answers. But as we know, you can’t count out Tom Brady in the postseason. Here are our rankings of the 14 playoff teams, split into three tiers — contenders, challengers, and longshots.

Correa Back to Twins? 1 Free Agent, 3 Teams & An Offseason of Twists Like Never Before

Carlos Correa was one of the most coveted free agents of the 2022-23 MLB offseason, and he went from the west coast to the east coast and back to where it started. After reportedly agreeing to deal with the Giants, then the Mets, Correa ultimately signed back with the Twins on Tuesday with a six-year, $200 million deal. That contract was far less than the offers reported from San Francisco and New York, but more details of what actually transpired are still emerging.

Correa ultimately opted to stay in Minnesota for less total money, but more per year. The star shortstop ran into challenges with the Giants, who raised concerns about his surgically repaired right leg. The Mets had concerns about his physical, as well. At 28 years old, a commitment for dozen-plus years might have spooked teams, and Correa, into a stronger, short-term deal.

MLB: 5 Reasons the Carlos Correa Deal is Important to Twins 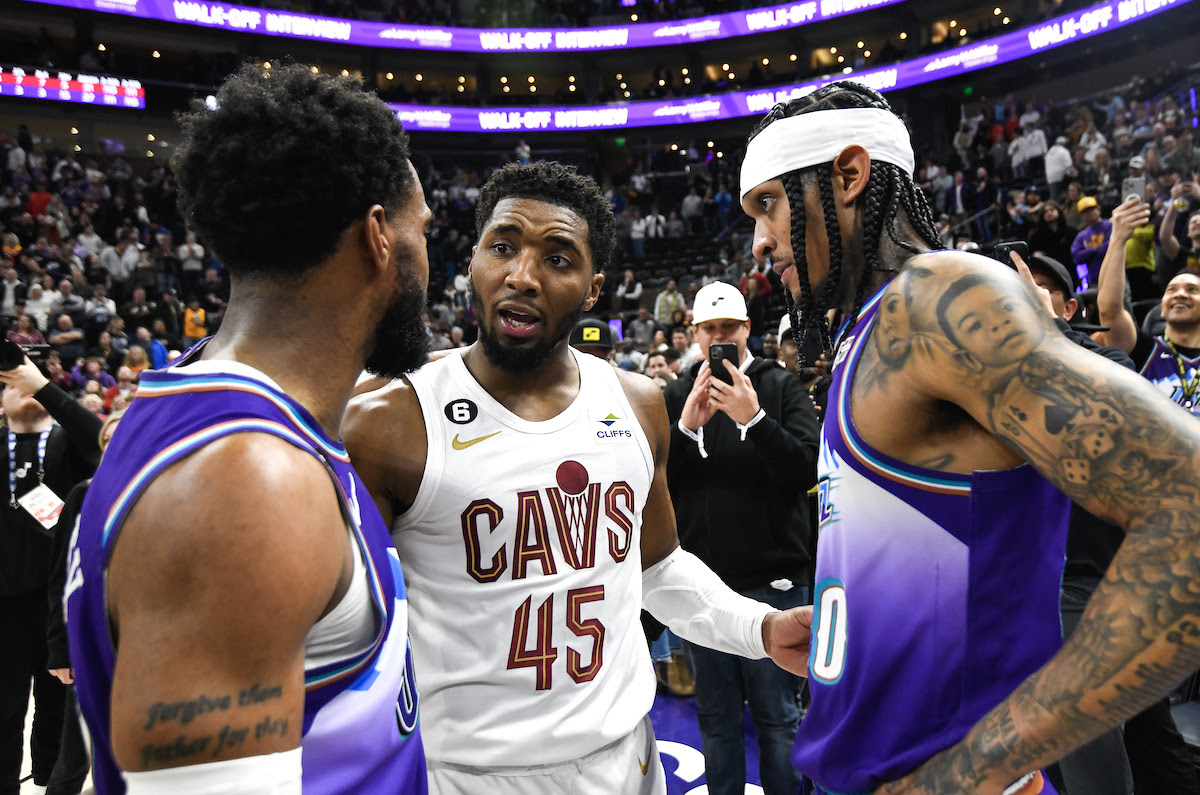 Donovan Mitchell is having a career year in Cleveland since being traded to the Cavs in September, but his first trip back to Utah — the team that drafted him in 2017 — was full of emotion. He dropped 46 points on seven 3s against the Jazz last night, but it was Utah who got the win (116-114) behind Jordan Clarkson’s 32-point night. Since being traded to Cleveland, Mitchell is having his best year offensively, averaging career-highs with 28.8 ppg on 49 percent shooting (40% from 3, 87% from FT). His shooting numbers were inflated by his 71-point outing a week ago, and his 46 last night gives him five games with 40-plus this season.

Embiid Buries Pistons: The 76ers have now won five of their last six after Joel Embiid (36 points, 11 rebounds) dismantled the Pistons last night (147-116). Philly shot 60.7 percent from the floor. It was the most points by an Eastern Conference team in regulation this season.

Heat Set FT Record: Jimmy Butler (35 points) secured a game-winning and-one for the Heat with 12.9 seconds left to beat the Thunder (112-111). In the process, Butler’s game-winner from the stripe helped Miami set an NBA record by making all 40 of their free throws, breaking the Jazz’s record in 1982 (39). 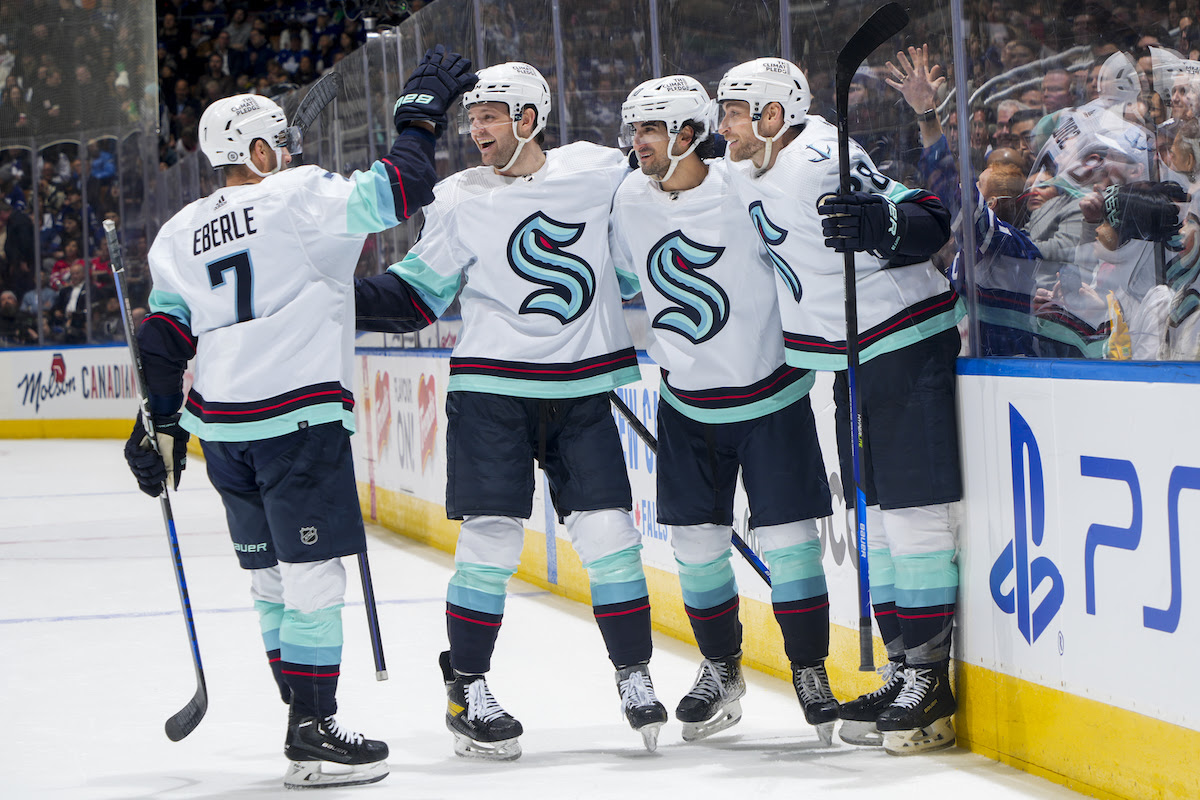 It was 2020 — in the depths of COVID-19 — when the NHL revealed its newest expansion team in the pacific northwest. The Seattle Kraken entered the 2021 season with hopes of building a fanbase. In 2022, winning is now on the menu. The Kraken topped the Sabres last night (4-3) thanks to a goal and an assist from Matty Beniers. His goal streak was extended to five games, and the Kraken’s win streak is now a league-best six straight. That’s right — Seattle is the hottest team in the NHL. At 52 points (24-12-4), they’re just four points back of Vegas for the top spot in the Pacific Division, and they’re within three wins of every team in the league aside from the league-leading Bruins (68 points). Two years after the Kraken franchise was created, it’s starting to awaken.

Rangers Rally in Wild Shootout: The Rangers rallied twice against the Wild to force a shootout after Filip Chytil made it 3-3 with six minutes to play. Artemi Panarin tallied the shootout winner for New York (4-3, SO), and the Rangers are 4-1 in 2023.

Penguins Keeps Metro Tight: An early three-goal deficit wasn’t enough for the Canucks to hold down the Penguins. Pittsburgh scored five unanswered goals to a 3-0 hole into a 5-3 lead thanks to Evgeni Malkin’s two-goal, one-assist game. They won (5-4), and the Metro race now has six teams separated by ten points.

The 2022 NFL season is officially in the books, at least for non-playoff teams. The 2023 head coaching cycle is also underway. With all that said, how did this season’s first-year head coaches fare? (CBS Sports)

The January transfer window is here and Premier League transfers are happening all the time. But where does each of the 20 Premier League clubs need to strengthen? What kind of player, or players, do they need? (NBC Sports)

The quest for March Madness is officially on, and 360 Division I programs are on a journey that will end at Houston’s NRG Stadium for the Final Four on April 1 and 3. There’s a long way to go before the bracket, but it’s never too early to speculate. (ESPN)