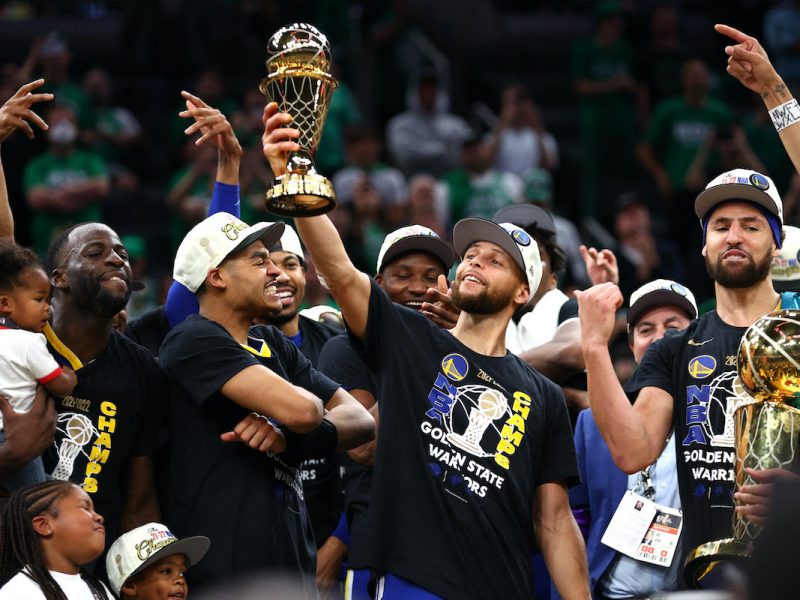 Dubs do it again! After a historic stretch as the NBA’s reigning dynasty, the Golden State Warriors battled through two years of missed playoffs, injuries and setbacks to win their fourth NBA title in eight seasons. The Warriors went 16-6 in the postseason as the Western Conference 3-seed, concluding with three straight wins after trailing the Celtics in the Finals (2-1). It culminated with a Game 6 victory in Boston on Thursday night, and another ring — the most unlikely — for the core group of the Golden State dynasty.

The Celtics jumped out to a 12-2 lead early on in Game 6, but the Warriors and Steph Curry (34 points) took the air out of TD Garden in a hurry. Golden State went on a 21-0 run in the second quarter — most of which came with Curry on the bench — before extending the lead to as many as 22. Boston battled back with a 15-2 run in the third, but the Dubs never the lead dwindle below 9 points. Golden State hit 19 threes, including a flurry down the stretch that sealed the deal with a few minutes to go, and the waterworks for Curry and company began.

Curry averaged 28.5 points per game in the Finals while shooting a ridiculous 31-for-71 (43.7%) from deep, and that’s including the 0-for-9 outage in Game 5. Believe it or not, it’s Curry’s first NBA Finals MVP award, and his fourth ring ties him with LeBron James for the most among active players.

The disappearance of Draymond Green early in the series saw the Celtics stifle the Warriors’ glue guy, but he erupted with a high-energy performance in Game 6 that made all the difference — 12 points, 12 rebounds, 8 assists, 2 steals, 2 blocks. He guarded Jayson Tatum for most of the game and held Boston’s superstar to just 13 points.

The Warriors are the standard of excellence in the NBA over the last decade. For those who don’t recall, Golden State appeared in five consecutive NBA Finals from 2015-2019, winning three titles before two seasons plagued by injury. They entered the 2021-22 regular season with +1100 odds to win the title. Eight seasons, six Finals trips, four rings.

Congratulations to the Golden State Warriors, your 2022 NBA champs!

B/R: No, The Golden State Warriors’ 2022 NBA Finals Run Was Not Unfair

ESPN+: How the Boston Celtics Should Approach the Offseason