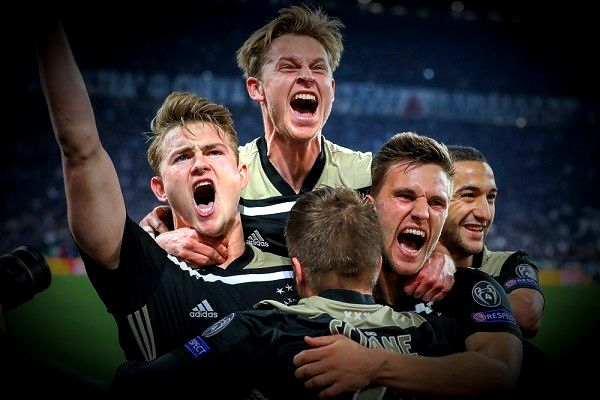 How The Champions League Underdogs Are Replaying History

This is actually happening, and it’s not a fluke.

AFC Ajax Amsterdam is through to the semi-finals of the Champions League once again. The most prestigious club in Dutch history is on quite a ride, and if you don’t know the backstory of this accomplishment, you should.

For more than half a century, Ajax has been the subject of European lore for one thing, and yet many things. Its youth program (the one thing) is one of a kind, and it’s produced the many things; players like Johan Cruyff, Dennis Bergkamp, Clarence Seedorf, Wesley Sneider, and Frank de Boer, to name a few. It’s also been a stepping stone for names like Luis Suarez and Christian Erickson, again, just to name a few. It is one small part of Ajax history that connects to iconic clubs across Europe, yet Ajax itself is a seller…

Whether or not you know those names, or even understand European futbol, keep reading.

Ajax churns through young talent and inevitably sells those players to some of the top clubs in Europe. Sports, after all, is still a business. It’s because of that model that the club hasn’t been in this position – a berth to the Champions League semi-finals – in 22 years. What’s even more impressive is how they got here, and to understand that, you need to know how they did it before.

Intrigued? Just wait, it gets better.

Ajax returned to the finals in ’96 and the semi-finals in ’97, and they were defeated by, you guessed it, Juventus. Both times.

What happened yesterday remains nothing short of remarkable. Ajax is not the power they were in the 70s, or even relevant like the mid-90s, yet here they stand, slayers of giants in the 2019 Champions League.

After escaping the group stage without a loss (three wins, three draws), the Dutch youngsters toppled Real Madrid (the holders and winners of the last three), followed by Cristiano Ronaldo and Juventus; both the No. 1 and No. 5 European clubs in UEFA rankings. When the Champions League began last fall, Ajax was ranked 28th.

They’ve shocked the world, twice, fielding a squad with an average age of 23 and a 19-year-old captain in Matthis de Ligt who wasn’t born the last time they made the semi-finals. Ajax is reascending, and not done yet.

*Ajax will face the winner of today’s second leg between Tottenham and Manchester City (3:00 pm ET)