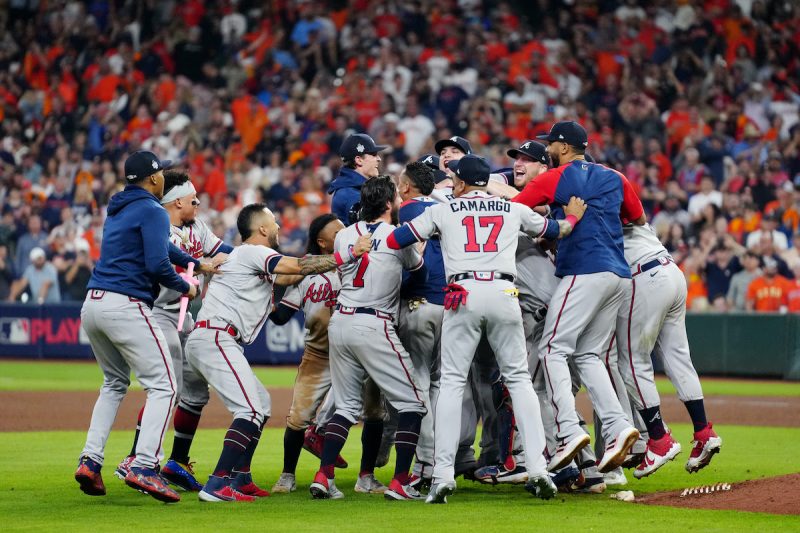 After 26 years and 16 unfulfilled playoff appearances, the Atlanta Braves are once again World Series champs! The Braves steamrolled the Astros in Game 6 (7-0) thanks key home runs and a gem from pitcher Max Fried. Atlanta entered the postseason with the lowest win total of any division winner (88 wins), but they took down the Brewers (3-1), Dodgers (4-2) and Astros (4-2) without facing a Game 7. After losing Ronald Acuna Jr. on July 10, few thought the Braves would be the last club standing. They didn’t clear the .500 mark until August. Now, they’re world champions.

Atlanta’s Jorge Soler pushed the launch button on a 464-foot, three-run blast in the third inning off Luis Garcia to start the Braves’ outburst. His homer cleared the train tracks above the left field wall at Minute Maid Park. Two innings later, Dansby Swanson hit a two-run homer. Freddie Freeman added another yard-shot in the 7th for the exclamation point to back an absolute gem from Max Fried.

Atlanta ace Max Fried had the flamethrower working in Game 6. He went six innings and allowed just four hits and zero runs with six strikeouts. The Astros never even threatened to score. Tyler Matzek and Will Smith came on in relief to allow just two hits over the final three frames.

Soler’s monster blast in the third inning was his third homer of the Fall Classic. All three blasts were go-ahead homers, making him just the sixth player in World Series history with three go-ahead home runs.

The Braves’ World Series title marks the fourth in franchise history, but it’s only the second since the team moved to Atlanta in 1966. Manager Brian Snitker joined the team in 2016, and he finally has a World Series title after taking Atlanta to the playoffs each of the last four seasons.

Congrats to the 2021 MLB World Series champions, the Atlanta Braves!

Yahoo! Sports: ‘It Was All Worth It’: A Baseball Life Reaches a World Series Pinnacle for Brian Snitker