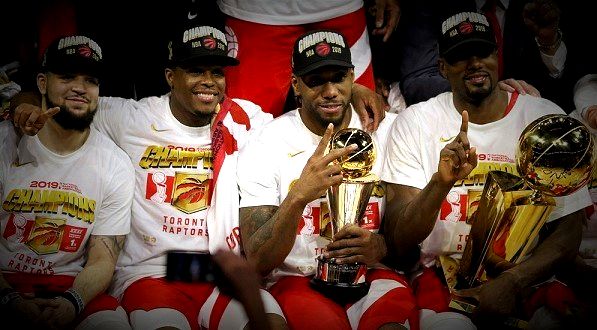 Thirty NBA teams. Twenty-nine in the United States. One outlier, one country, and one historic moment. As the streets of Toronto overflowed with the passion of a nation, the Raptors celebrated from top to bottom as a locker room, a front office, and a team of underdog stories.

When the franchise was conceived in 1995 as an expansion team, few outside Canada gave a second thought. But as the Grizzlies migrated from Vancouver to Memphis in 2001, the Raptors became Canada’s only team, its only hope, and its only path to NBA glory. This is a compilation of underdogs from the North, a nation where basketball first began, and a nation that deserves the Larry O’Brien Trophy.

General Manager Masai Ujiri
The Nigerian-born Raptors GM started his NBA executive career as an unpaid scout in 2003 with Orlando. He climbed the ranks in Denver and Toronto before executing two of the biggest trades in the modern era of the NBA; sending Carmelo Anthony to the Knicks (2011) and acquiring Kawhi Leonard in Toronto (2018). The latter brought a championship to an entire country.

Read: Masai Ujiri’s Underdog Feature in The Sportsletter (May 30)

Head Coach Nick Nurse
Once a graduate assistant at his alma mater of Northern Iowa, Nick Nurse went on a 29-year journey to become an NBA head coach. From collegiate assistantships and British leagues to a D-League expansion and an NBA assistant, no one knew Nurse until one year ago. He was handed the keys to a contender last summer, and he was tasked with delivering a championship in his first season as an NBA head coach.

Kyle Lowry
Lowry was a kid from North Philly who was too small, too slow, and showed no signs of becoming an NBA all-star. He went to Villanova before getting drafted late in the first round by the Grizzlies in 2006. It took Lowry seven years before he became a starter in Houston, and his season was cut short due to injury in 2011. Seven seasons in Toronto – five as an all-star – and they always came up short. Until now.

Pascal Siakam
The league’s Most Improved Player is one of the great underdog stories in the NBA. Just a kid from Cameroon who paid his way to the United States, lost his father in college, developed into a talented prospect, and made GM Masai Ujiri look like an absolute genius. Siakam was a sleeper who could become Toronto’s next superstar for years to come.

Kawhi Leonard
We knew who Kawhi Leonard was, but no one expected this. On a one-year rental, the quiet assassin from Los Angeles took Toronto on a playoff journey that will live forever. He finished with the third most points in a single playoff run in NBA history (732), and he willed the Raptors to glory series after series. From an underrated player at San Diego State, the No. 15 pick in the draft, and a primary defender upon entering the league, Leonard elevated his game to become one of the greats with two titles, and two Finals MVPs.

The rest of the Raptors?
They have great stories, too. From Fred VanVleet (an undrafted free agent from a mid-major program) to Jeremy Lin (yes, Linsanity is an NBA champion). From Marc Gasol (living in his older brother’s shadow) to Serge Ibaka (another African star with his first ring).

Toronto went all in for one season, one run, and one moment. Canada, this underdog story is all yours.