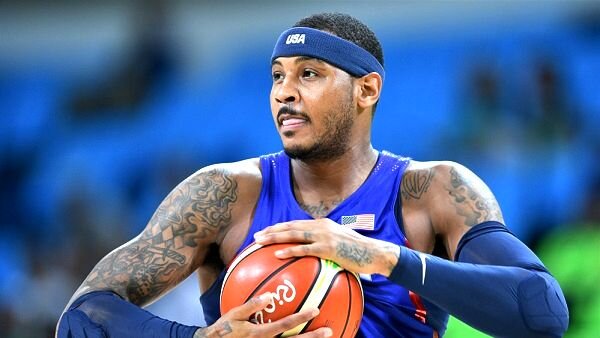 Failure is nothing new to Carmelo Anthony. Neither is success. The NBA star with maybe the most up-and-down career of all-time just rose again, and I hope he stays up.

Melo overcame a childhood story that many know. Born in Brooklyn and raised in the drug-infested neighborhood of Baltimore known as the Pharmacy, nothing came easy for Melo.

His father died when he was two years old, leaving his mother – a double-shift housekeeper – to care for four children. He was cut from his high school basketball team as a freshman. Those were downs.

He was also the quintessential one-and-done superstar as a freshman in college, leading Syracuse to a national championship in 2003. Taken third in that year’s NBA Draft, the saga of Melo was and always would be overshadowed by the No. 1 pick in 2003 – LeBron James.

To the Denver Nuggets for eight seasons, Melo became a scoring champ, 10-time all-star, six-time All-NBA selection, and a three-time gold medalist. With 25,657 points, he ranks 18th all-time and second among active players. Those were ups.

But failure and success go hand in hand. Melo has never won a title. In 11 playoff appearances, his teams have never even reached the finals. In 2011, he was traded the Knicks, where his game deteriorated into an epic collapse. In 2016, he was traded to the Thunder. Cut. And the Carmelo Carousel began.

From 2017-2018, Melo went from Oklahoma City to Atlanta, to Chicago, to Houston. The Rockets cut him, and he was out of the NBA. Seemingly, for good. At least for 370-plus days…

On November 19, the Blazers (5-9) ended Anthony’s agonizing year away from basketball – his fifth team in three seasons. He struggled off the bat. Dust. Rust. Another potential bust of ‘The Carmelo Experiment’. Portland lost three straight. They were 5-12.

Then came the week of Thanksgiving…

A time to be grateful for what we have. And Melo – more than most on an NBA roster – was especially thankful for his latest opportunity to play the game he loves.

“I think the greatest feeling of it all was to feel wanted by a group of guys who believe in me and my talent and what I can bring to the game… I could have still been home. Portland pulled the trigger and no matter what happens, I will always appreciate that.” – Carmelo Anthony

An especially thankful Melo led the Blazers on a three-game win streak last week while averaging 22.3 points, 7.7 rebounds, and 2.7 assists. He also shot 57.4 percent from the field and 45 percent from 3. Amazing.

Last night, he was named the Western Conference Player of the Week. This guy! A 35-year-old free agent no one wanted for 370-plus days needed just 13 to flip the narrative of the final chapter in his career.

Never give up on an underdog, because underdogs are never done.