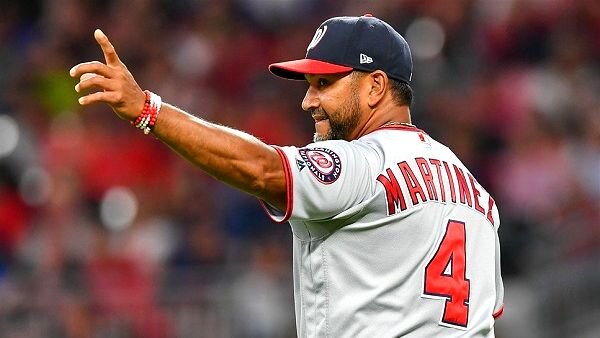 The Heart of the Nationals’ Magic Run

“Dave Martinez is a good man, but he probably shouldn’t be managing the Nationals.”

The road to the World Series was paved with potholes, like watching Bryce Harper sign a deal with the rival Phillies, like going a dozen games below .500 through the first 50 (19-31), like a heart procedure impacting a crucial September series against… the Cardinals.

The road was bumpy, indeed. How the car didn’t bottom out, slide into a ditch and get totaled is still remarkable. Must’ve been one skilled driver behind the wheel.

In Dave Martinez’s first-ever season as a major league manager, the Nats won 82 games and missed the playoffs. Harper walked. Hopes were crushed. A quality pitching staff with solid bats just lost its marquee player, and they were heading in the wrong direction.

His second year began with that horrific start. A start so bad they called for his job. A start so bad that you couldn’t convince anyone, even me – the biggest believer of underdogs – that the Washington Nationals – the historic choke artists of October – would be heading to the World Series.

So how did they do it? Heart.

More literally, it was a veteran pitching staff, two young stars in Juan Soto and Victor Robles, a resurgence from 35-year-old Howie Kendrick, and an MVP-caliber season from Anthony Rendon. But it was also the belief of a manager who’s seen it all.

On Sept. 16, Martinez left the Nats’ dugout in the sixth inning of a home game with chest pains. He was taken to the hospital for a heart procedure (cardiac catheterization) and missed a three-game series against (of all teams) the St. Louis Cardinals. The Nationals lost two out of three and saw their lead dwindle in the Wild Card race.

After Martinez returned on Sept. 20, Washington reeled off 10 wins in their final 11 regular-season games. Now, they’re 7-2 in the postseason, and 17-3 in their last 20. The hottest team at the perfect time, and that’s a beautiful place to be after a bumpy road.

I can’t spend 500 words walking you through Martinez’s upbringing in New York (there’s a story if they face the Yankees), or his 16-year playing career with nine different teams, or any of the personal underdog details I usually cover. However, I can briefly give you one of the most interesting pieces of symmetry that might make you believe in some Martinez magic.

From 2015-2017, Martinez spent three seasons as the bench coach for the Cubs. They won the World Series in his second year on staff and ended a 108-year title drought.

The Nationals signed him to a three-year contract in 2018, and in his second year in Washington, he’s on the verge of ending a 50-year title drought (the franchise has never reached the World Series, let alone won it).

The Astros have arms. The Yankees have bats. But the Nationals have heart, and a lot of it. This is one Underdog story with another chapter left to write…