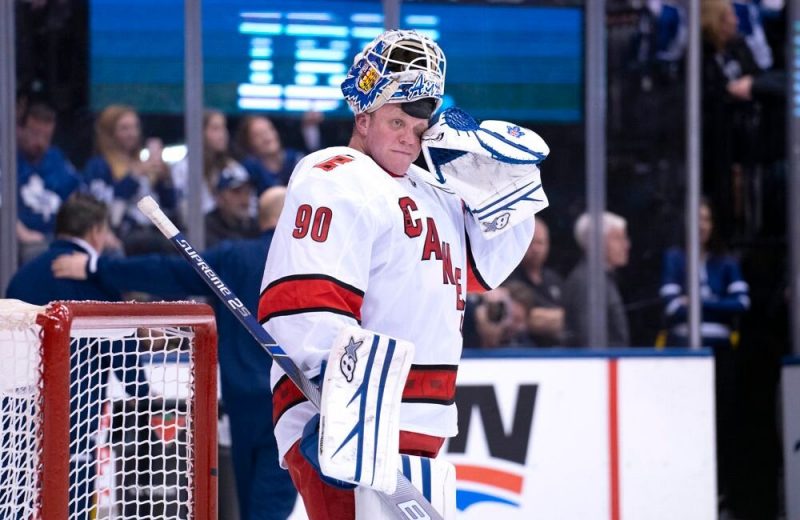 You didn’t know David Ayres a week ago. But today, it’s “David Ayres Day” in Raleigh, North Carolina. Here’s an Underdog that doesn’t sound real, but it might be one of the greatest sports stories I’ve ever seen. From Zamboni driver to victorious NHL goalie in one night, David Ayres deserves his own day, and his own page in sports history…

At 42 years old, Ayres is a full-time maintenance operations manager at a Toronto-area athletic center. He was also a former Zamboni driver and the practice goaltender for the AHL affiliate Toronto Marlies.

With two goalies on the roster for both the Carolina Hurricanes and Toronto Maple Leafs on Saturday night, Ayres was in the building listed as the third emergency back-up goalie in case either team needed him. Carolina did.

After the Canes lost James Reimer and Petr Mrazek to injury in the second period, they tagged in the EBUG from Toronto. What happened next was unbelievable.

Ayres let in the first two shots he faced, but the nerves were gone. He stopped the final eight shots on goal to hold the Leafs scoreless in the third period and preserve a 6-3 win for Carolina… Against his hometown team.

“In the locker room after the second intermission, I said to the guys, ‘Get one more and I’ll hold the fort in the third.’” — David Ayres (interview with NBC Sports)

When it was all over, Ayres got a standing ovation from the Toronto crowd before a shower of water in the Carolina locker room. A massive media tour ensued over the last 72 hours as fans and players alike still couldn’t believe it.

The emergency superstar also took advantage of the moment to do give back. He underwent a kidney transplant in 2004 — a severe concern that presumably ended his hockey career. The Hurricanes produced Ayres’ No. 90 jerseys for sale on the team website with proceeds going to a kidney foundation.

At 42 years old, a lifelong dream became reality for one Canadian in one spectacular moment. Oh, and the stick Ayres used on Saturday is going to the Hockey Hall of Fame. Cheers to the Underdog EBUG who went from balcony seats to winning locker room to top of the sports world in 30 wonderful minutes.