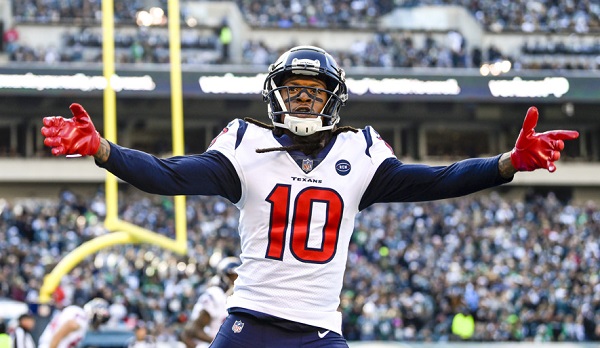 DeAndre Hopkins did something amazing in 2018, but it’s his heart, not his hands, that makes him a giant among underdogs. The largely underrated Texans receiver has a story, and an NFL record, you won’t believe. The story comes first…

When DeAndre was just five months old, his father, Steve Hopkins, was killed in a car accident. Steve was a full-time drug dealer, and he passed away after flipping his car on a Georgia highway in 1992.

DeAndre’s uncle, Terry Smith, was a Clemson receiver from 1990-93. Terry was shot and killed by police during a domestic violence call in 1997. He was reportedly attacking his wife and child when he was shot. The family didn’t believe the police report and launched an investigation, but the financial burden was too much.

DeAndre’s older cousin and idol, Javis Austin, was a running back at Clemson. After Javis’ older brother died of a heart attack, his playing time at Clemson suffered, and he attempted suicide by putting a gun to his head in 1999. He’s still alive today, but the bullet destroyed his eyesight and ended his football career.

DeAndre’s mother, Sabrina Greenlee, raised four children on her own in South Carolina. She was burned in an acid attack by her boyfriend in 2002. The boyfriend dropped her at a nearby gas station to burn and bleed until help arrived. She spent three weeks in a coma while doctors repaired her body with skin grafts, and DeAndre and his three siblings relied on extended family for support.

Even after his mother returned home, food and security were never a guarantee. She was blinded from the burns in her eyes, and finding work wasn’t always easy. A violent neighborhood surrounded DeAndre and his siblings. A local food shelter was a frequent refuge when there were no other options, and that was just the first decade of DeAndre’s life.

After dominating the high school scene in Central, South Carolina, Hopkins earned a scholarship at Clemson and followed the family tradition. A 6-foot-1, dynamic receiver with giant hands dipped in glue, Hopkins was a surefire pro prospect who could catch rain in the desert. He generated a lot of buzz with the Tigers, and he put up big numbers in his freshman and sophomore campaigns.

Then, another tragedy nearly caught DeAndre again. On his way to the team bus prior to Clemson’s Orange Bowl game in 2012, he wrapped his car around a tree. The scene was terrifying, and Hopkins could’ve easily died that day. Instead, he walked away with only a concussion, and he played in Clemson’s bowl game later that week.

Things changed for DeAndre heading into his junior year. After escaping death, he passed his uncle Terry in the Tigers’ record books and put together one of the best seasons by a wide receiver in college football – 82 receptions, 1,405 yards, and 18 freaking touchdowns in 13 games. That’s how he earned a first-round selection in the 2013 NFL Draft by the Houston Texans.

The three-time Pro Bowler is now one of the best receivers in the game, and what he did last season should go down in history as the greatest record no one is talking about.

Hopkins tied Andre Johnson’s franchise mark with 115 receptions, but get this – he did it without a single drop. Zero. Zilch. Goose egg. He’s the first player in NFL history to eclipse 100 catches and not drop a pass.

With the Texans now favorites to win the AFC South, Hopkins and his fellow Clemson QB DeShaun Watson are eyeing more records, and hopefully a ring.

Today, Hopkins is one of the most respected receivers in the NFL and a man of high character. He’s the spokesman and a contributor for a local Houston food shelter where his story resonates with families and kids. He moved his mother out of the house he grew up in, he gives back to his community in more ways than most, and he even mentors young Clemson receivers who struggle with off-the-field issues and tragedies. His 10.08-inch wide hands make him lots of money, but his giant-sized heart is the mark of an underdog.