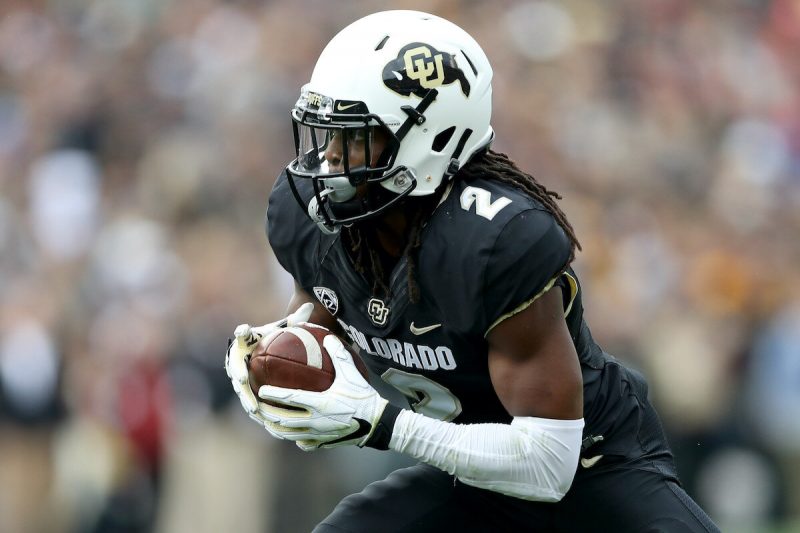 Colorado receiver Laviska Shenault Jr. is joining an NFL team next week. How he got here is one of the great underdog stories of the decade, and it centers around his lengthy dreadlocks grown in dedication to his namesake. This is one NFL Draft feature you won’t believe.

Shenault Jr. was 10 years old in 2009 when an unthinkable tragedy struck his family, and all five kids witnessed it up close. The family was traveling on Loop 12 outside Dallas, Texas when his father asked his mother to pull the car over and switch seats. Laviska Shenault Sr. slipped on the road and fell into oncoming traffic. He was hit by a car, then a truck. Laviska Jr. was in the front seat. His four siblings were in the back.

When the police and ambulances arrived, they had to handcuff his mother Annie because she refused to leave his father’s body in the road. The kids were crying uncontrollably. Laviska Jr. sat on the side of the road, stoic and emotionless.

His father was a Dolphins fan during the Dan Marino era. He played Madden against the kids, always using the ‘Fins. The boys were close with their father, but Laviska Jr.’s grief was hard to comprehend. He wasn’t very social before his father’s death, and he slid into a further state of isolation after. He started growing dreadlocks as a teenager to honor his father. That’s how it started.

Just a few years later, the Shenault’s mother had a scare of her own. Annie contracted West Nile virus in 2012. She was hospitalized for months, lost her job, and suffered countless symptoms that persisted for almost a year. Even walking required a cane for her altered equilibrium.

More challenges, and more reasons to grow the dreads in remembrance of his father.

Laviska Jr. was a better basketball player than a football player as a teen, but his coach at DeSoto High School had a rule about hair that goes past the shoulders. Laviska couldn’t play unless he cut his hair. He didn’t fight the rule. Instead, he quit basketball over this act of dedication.

With the extra time away from the court, he hit the weight room with ferocity and grew into a tremendous football body. DeSoto was well-known for producing NFL stars on the football field, and Laviska Jr. found himself as a highly touted recruit. He wore No. 2 to pay tribute to his father, too — Laviska Shenault II. And that still-stoic personality earned him the nickname “2 Live.”

He went to Colorado to play receiver where he spent the last two seasons shocking the Pac-12 with his unbelievable physical traits. Not only did he catch 142 passes for nearly 2,000 yards and 10 TDs, he also rushed for nearly 300 yards and seven scores in a short-yardage “bully back” run game.

His NFL scouting combine notes include a comparison to Sammy Watkins — a former No. 4 overall pick — and a nod to his “vice-grip hands.” He’s a do-it-all receiver that could be a steal in the late first or early second-round.

When he’s selected, he won’t get to walk on a stage at the Bellagio in Las Vegas. He wouldn’t like all that attention anyway. Instead, he’ll be at home, like the rest of the virtual draftees, surrounded by his family members. You won’t see much emotion, but the dreadlocks will remain untouched as this story is told on sets at ESPN and NFL Network.

The crazy part? The Miami Dolphins — his father’s favorite team — hold a league-high 14 draft picks, including five in the first and second rounds.

Almost 11 years later, the player with the most famous hair in college football, a tribute to a sport sacrificed in dedication, will hear the commissioner say his name, and his father’s… “Laviska Shenault.” What a moment for the underdog.