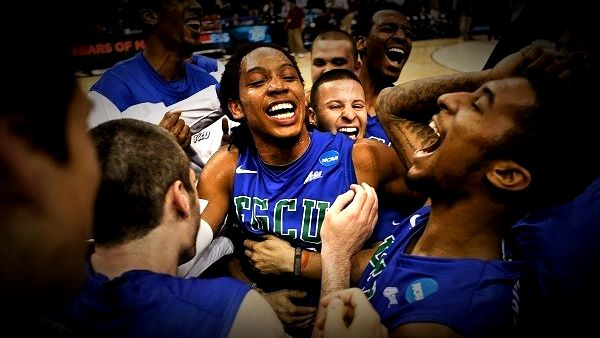 Florida Gulf Coast University opened its doors in 1997. Ten years later, the Eagles began their transition to Division I status, and they made it official in 2011.

FGCU head coach Andy Enfield had a monumental task before him. He’d spent 17 seasons as an assistant in college and the pros, but he was now the head coach of a brand new program. No history, banners, or groundwork to recruit – just a few scholarships and a flashy new campus in Fort Myers, Florida.

In February of FGCU’s second season at the Division I level, the Eagles ended the year on a five-game win streak that began in the regular season and ended with a win over Mercer in the Atlantic Sun championship. Just 18 months after their first Division I game, they were going to the NCAA Tournament.

Even with Enfield’s collection of knockoff ballers riding a five-game heater, few outside Fort Myers thought twice about FGCU. The Eagles’ roster was full of no-name “recruits” from top to bottom. Not a single name was a scouted high school player on the radar of any prominent Division I program: fourteen players, seven Florida kids, three international bench warmers, and one senior named Sherwood Brown.

Ah, Sherwood Brown (pictured in the middle of the postgame celebration seen above). Heck of a name. Couldn’t tell you what Sherwood Brown is up to now. Back then, the lone senior was a day-one guy at FGCU. He joined the team as a walk-on in 2009 when the Eagles were Division II. Four years later, he was the captain of an NCAA Tourney team.

After getting a 15-seed on Selection Sunday, the Eagles drew the 2-seed Georgetown Hoyas, a team with multiple three-star recruits and Otto Porter Jr. – an eventual NBA starter. What Georgetown didn’t have was a senior, and Sherwood Brown was the most experienced man on the court.

The Introduction to Dunk City

In the opening round of the 2013 NCAA Tournament, FGCU stole America’s hearts. A 15-seed had beaten a 2-seed just six times in 124 attempts. Those were upsets, and upsets happen. This was something different.

It was one part upset and two parts dunk contest. It was Sherwood Brown and the FGCU Globetrotters tossing alley-oops to unrecruited white dudes. It was Brett Comer lobbing picturesque set-ups for Chase Fieler and other unknown guys who are probably sitting at their 9-to-5 right now. At the horn, it was FGCU 78, Georgetown 68 – the biggest upset in Tournament history at the time.

The nation saw brackets busted by a team so new that nobody knew where they came from, so Fort Myers gave itself a new name; Dunk City.

The legend of Dunk City wasn’t over after one upset. They were just the seventh 15-seed to advance past a 2-seed in the opening round, but no 15 had ever made it to the Sweet Sixteen. The Eagles did just that. They faced San Diego State in the second round and delivered more of the same. FGCU 81, SDSU 71.

After 159 points in two games (20 percent came via rim-rocking highlight dunks), FGCU lost in the Sweet Sixteen to their big brother, the Florida Gators.

There are shocking upsets every year in the NCAA Tourney, but in the history of March Madness, there’s only one Underdog story featuring a two-year-old program, spawned from nowhere, making the Sweet Sixteen with the flashiest pair of upsets the world of basketball has ever witnessed. F-G-C-U: Florida Gulf Coast Underdogs.