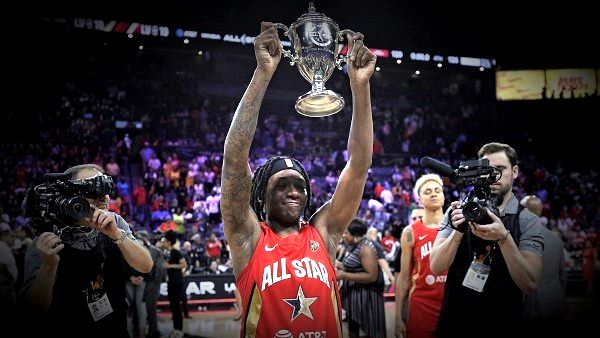 I sat down in a dusty corner of the practice facility at Bankers Life Fieldhouse in Indianapolis, awaiting a post-practice interview with a little-known guard from Rutgers. Her name was Erica Wheeler, and she was starting to put the WNBA on notice.

That was 2016, and a 5-foot-7 sparkplug quickly became my favorite sports interview of all time. Not Coach K, not Andrew Luck, not Mario Andretti. No, it was this real, raw, genuine WNBA player who wasn’t callused over by thousands of past interviews and media attention.

I wrote this Underdog story three years ago for a team website, and I’ll take any excuse to tell it again because Erica Wheeler is the most real underdog I’ve ever met.

She sat down next to me after that practice. We were already pals. She was cool like that, and she didn’t hold back who she really was. I didn’t need to ask questions and dig for the story because she knew she had a great one, and she let it rip.

Wheeler was a Miami native, and winning was in her DNA. She claimed two state championships in high school while becoming the leading scorer in the state of Florida. She was a McDonald’s All-American, and a scholarship was waiting at Rutgers with legendary head coach Vivian Stringer.

Wheeler was a star for the Scarlet Knights in three consecutive seasons, but she lost her mother to cancer her junior year.

“Me and my mom we’re really best friends,” Wheeler told me. “She was just that person I could talk to about anything.”

She told me about her tattoos, and each had a story. The most important? A picture of her mother on her right shoulder with the words “My Motivation.”

After she nearly skipped out on her senior season at Rutgers, Wheeler went undrafted but didn’t give up. She found one club with a roster spot in 2013; a team called Ponce in Puerto Rico. She made $200 a week, but she did what she always did: win. Ponce went from back-to-back losing seasons to a Puerto Rican title with Wheeler as the captain.

She tallied multiple 40-point games in Turkey in 2014 before a move to Brazil in 2015 where she won another championship.

In the last three years since she returned to the states, Wheeler transitioned from backup point guard and speedy defender to knockdown shooter and offensive facilitator. She supplanted All-Star point guard Briann January with the Indiana Fever this season, then she made the All-Star roster in her first year as a starter.

Saturday’s All-Star Game was a dream come true for Wheeler, but what she did with it was unbelievable. A mesmerizing 6-for-6 start from 3-point range led to 25 points, 7 assists, the MVP, and one tear-jerking post-game interview the WNBA will never forget.

“Just never give up. No matter what anyone tells you, just keep moving. I use my mom as my motivation because I know she’s watching me more than ever, so this one right here is for you, mom.” – Erica Wheeler

From $200 a week in Puerto Rico to the WNBA All-Star Game MVP… That’s E-Dub, the most authentic underdog I know.

Read: Wheelin’ Around: Erica Wheeler’s Journey to the WNBA (2016)