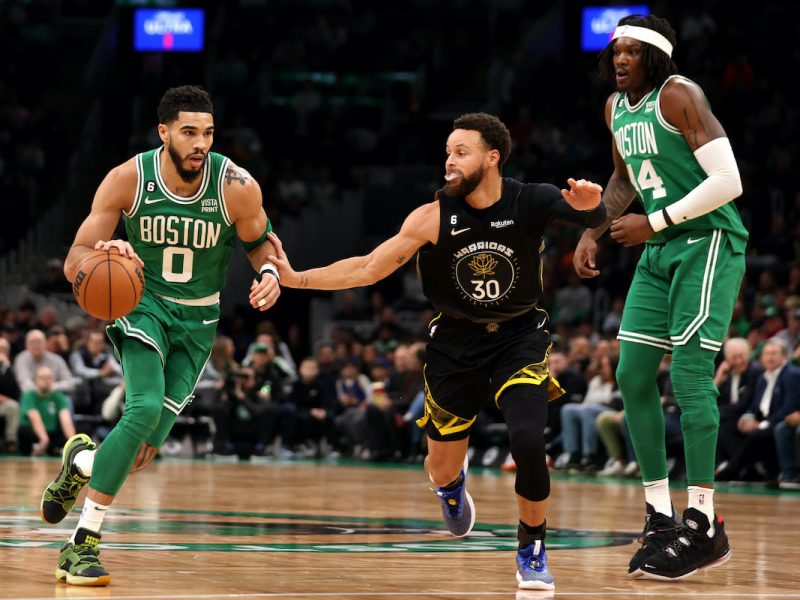 What a game! The Celtics and Warriors faced off in an overtime thriller that saw Boston finally exercise their demons with Golden State. Just like the final three games of the Finals and their previous matchup in December, the Dubs controlled the majority of the game thanks to their stifling defense, holding the C’s to just 39% from the field. Despite that, Jayson Tatum (19), Al Horford (10), and Robert Williams (11) all recorded double-digit rebounds to lead an assault on the glass and keep the game competitive. Jaylen Brown then came alive down the stretch and sent the game to overtime by knocking down a clutch three with just 18 seconds left. In OT, the Celtics used an 8-0 run to give them just enough of a cushion to withstand a late Golden State run and pick up their eighth straight win.

Despite the loss, Steph Curry made the play of the night by picking Tatum’s pocket and drilling a pull-up jumper from about 50 feet out to close the half.

One of the more fascinating storylines all year has been the Warriors’ struggles in away games. Even though they are one of the most battle-tested and experienced groups in NBA history, they cannot seem to figure out how to win on the road this year, as they are now just 5-18 on the road, good for second worst in the league. For a team that has won a road game in an NBA record 27 straight playoff series, it is utterly perplexing how bad they have been away from the Chase Center this season.

ESPN: Where Have the Warriors Gone? Collapse to Celtics Could Spark Changes by Steve Kerr