From Peril to Paris 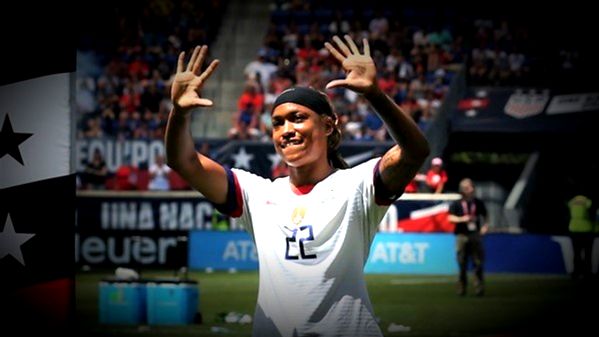 As the United States Women’s National Team (USWNT) travels to France for the 2019 Women’s World Cup this weekend, there’s one player on the roster – a 31-year-old mother in her first World Cup appearance – with a remarkable story. This is the tale of Jess McDonald, a soccer survival saga, and a trip for two to Paris.

Born and raised in Phoenix, Arizona, McDonald’s childhood was full of challenges that would prepare her for trials ahead. Her father was in and out of prison. Her teenage mother battled addiction. She bounced around with family members for most of her early years, and still excelled on the field and in the classroom.

High School: McDonald dominated Arizona with multiple state titles in basketball and soccer, as well as a state record in track. She was the embodiment of athleticism; a 5-foot-11 high-riser with unmatched speed. Those talents made her a three-sport athlete at Phoenix Junior College before a transfer to North Carolina. The UNC coaches battled for her scholarship, and she ultimately ended up on the pitch.

Pro: In her first game as a pro, the 22-year-old rookie suffered a torn patellar tendon – an injury that required a two-year rehabilitation timeline. By the time she recovered, two things had happened: McDonald was pregnant, and the WPS was extinct. She gave birth to her son, Jeremiah, but never gave up on her dream.

With and without Jeremiah, McDonald traveled from Australia to Europe and back to the states with the formation of the National Women’s Soccer League (NWSL) in 2012. From Chicago to Seattle, Portland to Houston, and New York to North Carolina, she played fractions of seasons and struggled to survive. Her NWSL salary was near the minimum ($16,000 per year), and she worked 11-hour days at an Amazon factory in the offseason to put food on the table for Jeremiah.

USWNT call-ups make significantly more than the NWSL minimum salary, but the national team roster was often filled by teenage superstars thrust into the spotlight. McDonald, a striker, never had a chance of breaking onto a roster with forwards like Alex Morgan, Christen Press, and Carli Lloyd. Until 2018…

After years of moving Jeremiah, struggling to afford help, and sometimes bringing him to practice while he cried on the sideline, McDonald caught a stroke of luck. She returned to North Carolina to play for the Courage in 2018, and she lit up the league to end the season. Four goals and four assists in the final seven games prefaced a two-goal MVP performance in the championship game. In a flash, McDonald put herself on the map.

In November, she received a call-up for the USWNT. A roster spot for the World Cup squad wasn’t a guarantee, but one phone call from head coach Jill Ellis confirmed the invite in April.

“There have only been a couple of things I’ve ever wanted in life… To make it (to the World Cup) and for my son to say he was proud of me.” – Jess McDonald

You may not see McDonald take the pitch this month in tight matches, but the journey, the moment, and the story are too great to avoid. If the USWNT puts an opponent away early in June, expect a substitution by number 22, accompanied by tears of joy from a 31-year-old mother and her 7-year-old son.

McDonald spent her life traveling the world and surviving the sport in pursuit of a dream, and a mother-son trip to Paris is a dream come true.