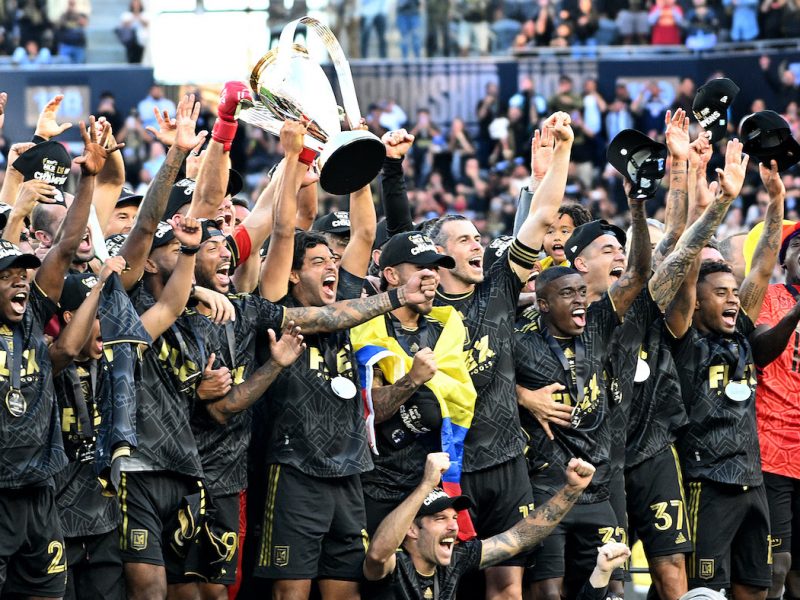 Written in the stars! LAFC claimed their first-ever MLS Cup title on Saturday in a wild finish via penalty kicks against Philadelphia Union (3-3, 3-0 PKs). Kellyn Acosta scored the only first-half goal (28’) to put L.A. on top at the break, but a flurry of back-and-forth strikes down the stretch led to extra time at 2-2. Philly’s Jack Elliot scored his second goal of the game in the 124th minute in what looked like the Cup-clinching winner, but super-sub Gareth Bale had other plans for LAFC. In the 128th minute, Bale headed home an end-line cross that sent Banc of California Stadium into earthquake mode. In penalty kicks, it was LAFC substitute keeper John McCarthy who played the hero with two quick saves in PKs to seal the win.

One of the recent MLS expansion franchises, LAFC didn’t wait long to establish itself as the league’s premier club. Their ascension began with high-profile ownership, including names like actor Will Ferrell and sports legend Magic Johnson. The team was established in 2014 but didn’t make its MLS debut until 2018. And they’ve acquired more iconic international talent in recent years than anyone, landing players like Carlos Vela and Gareth Bale. They’re the first team since 2017 (Toronto FC) to win the Supporter’s Shield and MLS Cup in the same season.