Houston, We Have A Title! ☄️ 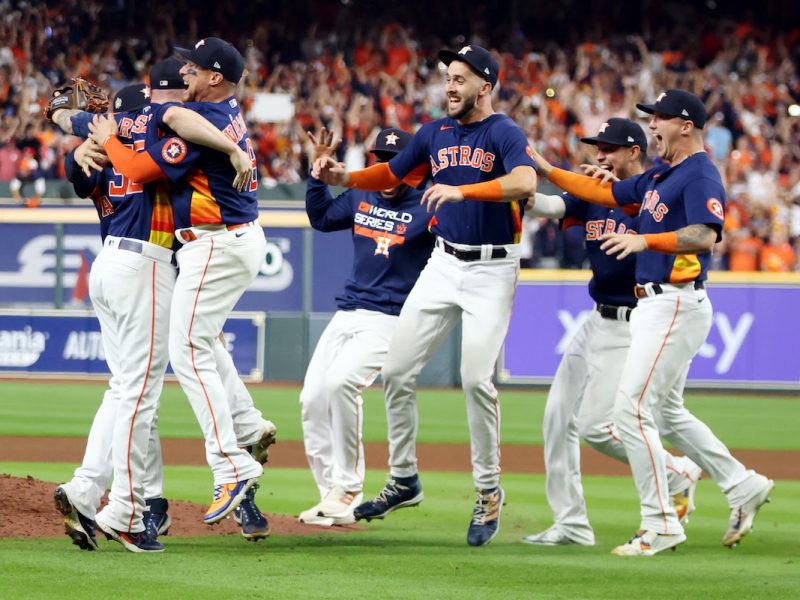 Five years later, the Houston Astros are world champions without an asterisk! It was 2017 when the ‘Stros celebrated their first-ever World Series victory, then had to suffer through years of contentious chatter around the cheating scandal that plagued that title. In came Dusty Baker — a seasoned managerial vet — and a pair of young stars to revamp the roster in Jeremy Pena and Yordan Alvarez. The ‘Stros are champs again, and this one feels extra special for Houston.

The Astros won Games 4 and 5 in Philly before returning to Houston needing one win in the final two games, but they didn’t mess around with the idea of a Game 7. Framber Valdez was magnificent on the mound once again, tossing nine Ks over six innings with just two hits and one earned run. That defensive showcase only needed minimal run support to get the job done, and the Astros got it on one swing from Yordan Alvarez — a three-run blast in the 6th inning. Closer Ryan Pressly pitched the final frame and got Nick Castellanos to fly out to Kyle Tucker for the last out. Fireworks in Houston.

While Saturday marked the Astros’ second World Series crown (2017), it was the team’s fourth trip to the Fall Classic in the last six years. They fell to the Nationals (2019) and Braves (2021).

At 73 years old, Dusty Baker became the oldest manager in MLB history to win the World Series. He began his managerial career in 1993, and he held the record for the most games managed without a ring (3,884), until Saturday. He also won the World Series as a player with the Dodgers in 1981 but winning one as a manager was the final piece to a Hall of Fame resume.

Everyone knew Yordan Alvarez was the Astros’ young superstar heading into 2022, but rookie shortstop Jeremy Peña surprised everyone after the trade of Carlos Correa. Peña had a stellar rookie campaign, but his World Series presence at the plate and on defense earned him the MVP (10-for-25, 1 HR, 3 RBIs). He’s the first rookie to win the World Series MVP.

Congrats to the Houston Astros, the 2022 World Series champs!

SI: The Astros Are World Series Champions — No Asterisk Needed

NY Times: A ‘Legend’ — Dusty Baker — Finally Gets His Moment