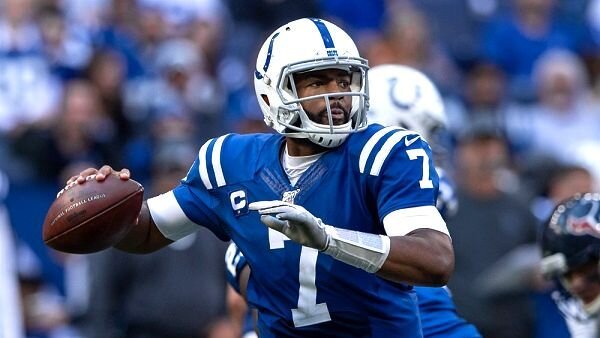 The Indianapolis Colts were dead men walking. When quarterback Andrew Luck stunned the NFL and retired in late August, just two weeks before the start of the 2019 season, the Colts went from Super Bowl hopefuls to an NFL afterthought. The franchise’s beloved No. 12 was booed as he walked off the field for the final time. Season tickets, dumped. Jerseys, shredded. Super Bowl odds, destroyed.

Haven’t we seen this before? Like, this year? Three times?

Yeah, friend. We have. The Indianapolis Colts were dead men walking… Just like the St. Louis Blues with the worst record in the NHL in January. Just like the Toronto Raptors who trailed in every playoff series in the Eastern Conference. Just like the Washington Nationals after losing Bryce Harper and going 19-31 to open the season. And just like a 2017 NFL team I’ll get to in a minute.

What makes an Underdog special is victory in the face of adversity, and nothing screams Underdog like a backup quarterback. This is the third feature on a backup QB in the 2019 NFL season, but Brissett is no backup. Not anymore. It’s only Week 8, and a record-setting 48 quarterbacks have logged starts for 32 teams this season. Almost 50 percent of the league has had to start a backup or third-stringer under center.

Technically, the Colts aren’t one of them.

Brissett has flown under the radar in the year of the backup QB. Teddy Bridgewater, Gardner Minshew, and Kyle Allen have each garnered the spotlight, but it’s Brissett who will most likely be playing in January.

Don’t know Jacoby? Let me tell you about Indy’s number 7 savior in roughly 30 seconds: He was a stud at N.C. State before the Patriots took him in the third round of the 2016 draft. Raised by a single mother, he’s humble, gracious, and well-liked by absolutely everybody. He’s been waiting for an opportunity like this one, and he’s seizing it.

The guy negotiated his own contract after Luck retired.

“Yeah, I do it myself. I don’t like people to B.S. on my behalf. I try to say it for myself… all you can be is honest.” – Jacoby Brissett

He talked the Colts into a 2-year, $30 million extension, because he’s got a stellar relationship with the Quarterback Whisperer, and history is on his side.

Now I’ve confused you. Let’s go back to that 2017 NFL team I mentioned before because — just like the Blues, Raptors, and Nationals — history teaches you how to spot an Underdog.

The Philadelphia Eagles lost a starting quarterback during the 2017 season, and they won Super Bowl 52 with backup Nick Foles under center. Frank Reich was the quarterbacks coach in Philly that year. Now, Frank Reich is the head coach of the Colts. They’re 5-2 atop the AFC South, and Brissett is on pace for 3,500 yards, 30 TDs, and 7 INTs. Quarterback Whisperer? Thy name is Frank Reich.

Want more reason to believe? Brissett backed up Tom Brady and Jimmy Garoppolo during his rookie season in New England. Those two quarterbacks are 15-0 this year. With Brissett, the trio is a combined 20-2, and he’s playing better than both.

Only Aaron Rodgers, Patrick Mahomes, and Russell Wilson have a better TD-INT ratio than Brissett this season.

When the Colts were 4-2, I still had questions, but Brissett was on my list of potential Underdog features. Then, I saw this play that turned a game-ending safety into a game-winning drive against the Broncos on Sunday (escaping defensive superstar Von Miller, of all people).

By the most bizarre of circumstances — as Luck would have it — the Jacoby Brissett era arrived in Indy to kickstart the year of the backup QB. By Week 8, it’s clear… Jacoby Brissett is a franchise quarterback.