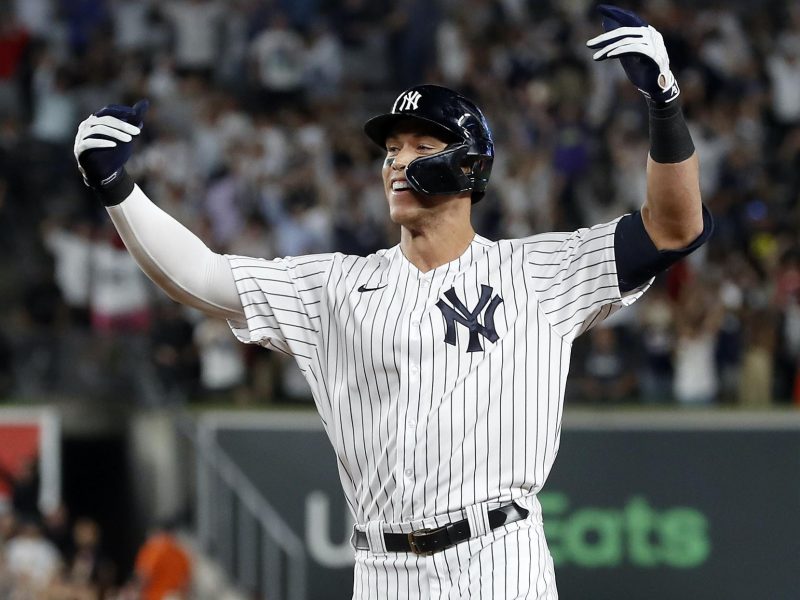 Inside the Historic Season of Homers From Yankees’ Slugger Aaron Judge

All Rise: Aaron Judge is on his way to a very impressive accomplishment. With the MLB season about halfway over, Judge is sitting at 30 home runs, putting him on pace to become the first player to reach 60 home runs in a season since steroid testing began in 2003.

However, to reach this record-breaking number, he must take advantage of every game left in the season. Lately, Judge has been absent from the Yankees starting lineup despite being healthy. When interviewed before batting practice, manager Aaron Boone said that he is “just being cautious” with certain players, including Judge. With a large lead in the AL East, Boone is giving Judge periodic rest in mid-July due to a lessened sense of urgency. Judge missed last Thursday’s game versus the Red Sox, as well as versus the Reds on Tuesday night. If this continues, it could be bad news for Judge’s home run situation, but great news for Yanks fans looking at the long game.

So far, Judge’s season has basically been a home-run derby. However, he will not participate in the official Home-Run Derby (just like last year, the year before, and the year before). In fact, he hasn’t competed since winning in 2017. When interviewed by The New York Post about the reasoning behind his decision, Judge simply responded, “Nope. No need, I already did it once. I’m all good with that.”

Basically, he’s saying, been-there, done-that, no thanks. Can’t you see why New York loves this guy? But, I can’t blame him. Just like the Madden curse and the Master’s par 3 contest, he doesn’t want to fall victim to the Home-Run Derby jinx of strikeouts if he wins.

Though everyone knows Aaron Judge’s superpower is hitting home runs, it’s certainly not the only thing he can do. Currently, Judge is tied for fourth in RBI count, with 65 so far this season. He comes in second for slugging percentage and fifth for on-base plus slugging percentage. He tops the chart in total runs at 67. In almost every relevant statistical category, Judge is in the top 5 players. So I’d say he’s more than just a home-run machine.

Aside from his quest for 60 homers, everyone is wondering about Judge’s contract extension (or possible lack thereof). Judge has already said that he will not discuss this issue with the press as the Yankees seek their 28th World Series pennant. Currently, Judge is set to take the field on July 19th in Dodger Stadium for the All-Star Game. After the All-Star break, court is in session as Judge resumes his journey to 60 homers, assuming he maintains his normal playing schedule and is not put on periodic rest. Judge is closely trailed by Philadelphia’s Kyle Schwarber with 28 and Houston’s Yordan Alvarez with 26.