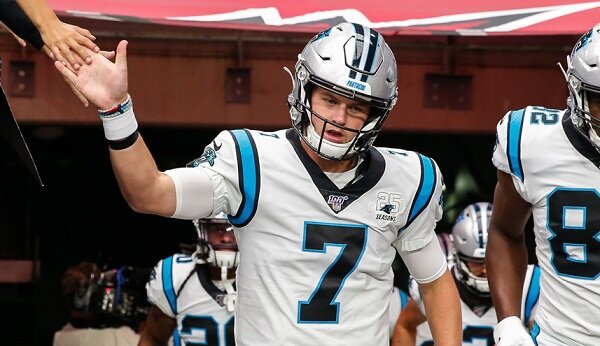 The Comeback Story of a Forgotten Quarterback

Starting quarterbacks are going down left and right in the NFL. That’s the story of the 2019 season, but there’s one sub-story of the backups that’s gone under the radar. Sure, Daniel Jones’ debut was fun and Teddy Bridgewater replaced Drew Brees in his sleep, but with another lingering injury to Panthers’ quarterback Cam Newton, the story of a forgotten quarterback goes on.

Kyle Allen was destined for greatness. Most underdog stories tell the tale of an athlete’s perseverance against the odds, but this one didn’t start that way. It’s the story of a kid who was ‘the next big thing’ until he had to sit behind the other big thing… twice.

Allen threw for more than 8,000 yards and 82 touchdowns in three seasons at Desert Mountain High School in Arizona. He was a five-star recruit, and he could’ve played anywhere in the country. He chose Texas A&M hoping to post big numbers in an air-raid offense. That was 2014.

Later that summer, Texas A&M offered a scholarship to a quarterback in the class of 2015. His name was Kyler Murray, the No. 1 overall pick in last April’s NFL Draft.

After the Aggies lost three straight games in Allen’s freshman season, he took over as the starter and delivered an upset win over 3rd-ranked Auburn. He remained the starter for the rest of 2014, but after leading A&M to a 5-0 start in 2015, one abysmal outing against Alabama resulted in three interceptions and a blowout loss. Enter: Kyler Murray. Exit: Kyle Allen.

Allen transferred to Houston, was forced to sit out a year, then played three games for the Cougars before getting benched. Once a prospect with the tools to become the next NFL star, his career stalled because of a superstar who would inevitably become the top pick.

Allen’s collegiate stats read 4,000 yards, 37 touchdowns, and 18 interceptions in 24 games of three incomplete seasons that included getting benched at two different schools. That’s a college resume littered with red flags for NFL scouts. Can’t imagine many quarterbacks have ever posted numbers that mediocre in college and become pro starters.

Fun Fact: Of the other 31 starting NFL quarterbacks, only two posted similar numbers in collegiate careers that totaled less than 30 games; Tom Brady and Aaron Rodgers.

After his 2017 season, Allen entered the draft against all odds. There were more than 20 quarterbacks rated higher, including Sam Darnold, Baker Mayfield, Lamar Jackson, Josh Allen, Mason Rudolph, and Luke Falk near the top. They were all drafted, and they all started last Sunday.

Allen was signed to the Panthers practice squad as an undrafted free agent, earned the backup job last season, and logged two touchdowns in Cam Newton’s absence late in the year. After Newton went down again this season, Allen exploded for four touchdowns against… you guessed it… Kyler Murray and Allen’s hometown Arizona Cardinals.

Tuesday’s news about Newton’s foot injury could result in another 4-6 weeks with Allen under center. Newton hadn’t thrown or rushed for a touchdown in his last four regular-season games dating back to 2018, and if Allen continues to shine, this quarterback controversy could get real.