LeBron vs Steph: Is It Even A Debate? 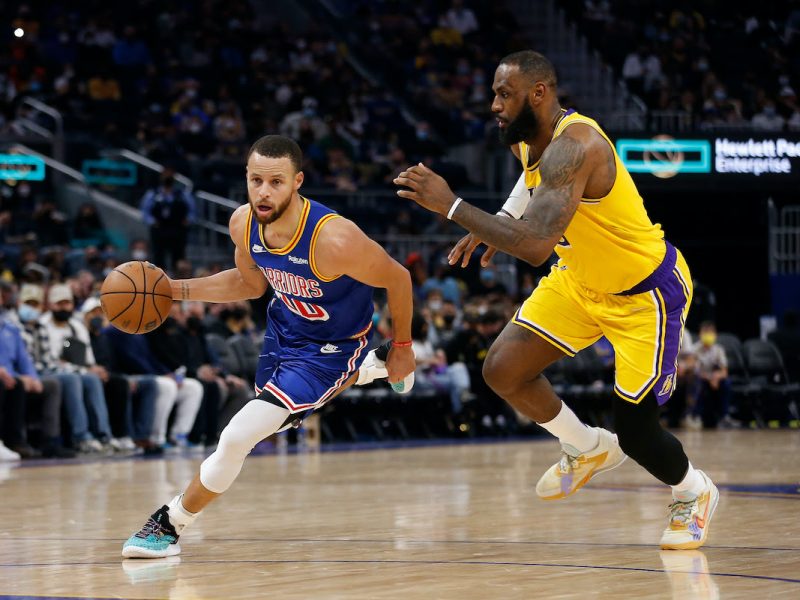 The Generational GOAT Discussion That Deserves A Closer Look

We’ve all heard it a million times: The LeBron-Jordan GOAT (Greatest of All Time) debate. I’ve had this conversation enough times to know that it mirrors talking politics. You’re never going to convince the other side that your argument is right, and vice-versa. Frankly, the whole thing makes my head hurt. But recently, I’ve been hearing of a LeBron-Steph GOAT debate. Let’s pump the brakes on that one. Yes, Steph is the best shooter in NBA history. Yes, they both have four rings. However, Steph is not the all-around player that LeBron is, even with the supporting squad he’s surrounded by. But let’s take a closer look for those in camp Curry…

As we know, stats can read both ways. It would be easy to look at LeBron’s career stats and say he’s way better than Steph. But he’s also been playing in the NBA for 19 years versus Steph’s 13. You could look at Curry’s stats and say he’s better because he has four rings already with years left ahead of him. You could look at his rings and say that he won three of his four head-to-head matchups with LeBron during their four consecutive Finals appearances between 2015-2018. If we looked at 2015, we’d see a pretty solid Big Three in Cleveland: LeBron, Kyrie Irving, Kevin Love. No excuse for LeBron there, right? Oh wait. Kyrie and Kevin Love sat the bench with injuries during the 2015 Finals.

Nevertheless, the series went to six games. LeBron and the Cavs came back from 3-1 to win the 2016 Finals. Then, the Warriors signed Kevin Durant which made it virtually impossible for Cleveland to keep up in the 2017 and 2018 NBA Finals.

When we look at regular-season stats, not career stats, we still see that LeBron is beating Steph in almost every category. Despite Steph’s status as the best shooter in the NBA, LeBron still averages more points per game with 27.1 compared to Steph’s 24.3. This helps craft LeBron’s argument as a better all-around player because most of Steph’s points per game are 3s whereas LeBron’s points are earned by a combination of 3s, along with driving in the paint, and his signature dunks.

To further credit this argument, LeBron leads Steph in rebounds per game, assists per game, and blocks per game, while Steph has a small edge in steals per game. Steph does have the edge in both 3-point percentage and in free-throw percentage, but I don’t really think anyone is debating that.

As I mentioned, career stats can be deceiving because LeBron has played six more seasons than Steph has. So, if we really want to have the GOAT debate here, it would be fair to say that if you multiplied Steph’s career stats by how much longer LeBron has been playing in the NBA (in this case, 1.5), they should equal or surpass LeBron’s, right? Let’s test that theory.

Though these stats alone should squash any debate between these players, I can already hear the next argument for Steph’s total rings (4) to LeBron’s total rings (4) in a shorter time frame. It’s a good question. But it’s not one without an answer.

LeBron has made the playoffs 15 of his 19 seasons and has had 10 Finals appearances. When we look at his Finals teams, we see a little bit of everything. The way I’d describe LeBron’s 2007 roster (his first Finals appearance) would be one word: “who?” It wasn’t a huge surprise that they got swept by the Spurs that year, but nevertheless, LeBron took a pedestrian team all the way to the Finals. Pretty impressive, regardless of the outcome, if you ask me.

Then, of course, everyone remembers LeBron’s time with the Miami Heat. The Heat was the closest thing to a superteam LeBron would have in his career, especially in comparison to Steph. Miami’s Big Three — The King, Chris Bosh, and Dwayne Wade — were victorious in the 2012 and 2013 NBA Finals. Once LeBron won his rings in Miami, he made a promise to return home to Cleveland and bring them their first ring. Not only did he deliver, but he made NBA history by being the first team to ever come back from a 3-1 lead (sorry Steph). After taking the Cavs to two more Finals appearances, LeBron signed with the Los Angeles Lakers where he won the 2020 Finals alongside Anthony Davis.

There is no doubt that LeBron has played alongside some superstars throughout his career: Kyrie Irving, Dwayne Wade, Chris Bosh, and Anthony Davis. However, if we look at Steph, he’s played with Klay Thompson and Draymond Green for the last 10+ years and Andre Iguodala for the last 9 years with additions like Kevin Durant, Jordan Poole, and Andrew Wiggins along the way. Steph also played under coach Steve Kerr, a luxury LeBron was never able to attain. To be fair, Steph didn’t have this whole squad at the same time either, but let’s look at who he did have…

In the 2015 Finals, Steph had Iguodala who won the Finals MVP after defending LeBron and averaging 16.3 points (LeBron averaged 35.8 points that series, but no big deal). He also had Klay who averaged 15.8 PPG and Draymond who averaged 13 PPG, supporting his 26 PPG and leading him to his first ring. In 2017, Steph’s 26.8 PPG was overridden by Kevin Durant’s 35.2 PPG. Klay’s 16.4 PPG and the Defensive Player of the Year, Draymond Green, supported them, leading Steph and Golden State to another ring. In 2018, Steph and Durant combined for an average 56.3 PPG, still supported by Klay’s 16 PPG and Draymond and Iguodala’s defense. And as we all know, Steph worked his magic in the 2022 NBA Finals, but he was far from a one-man-band. He still had an average of 18.3 PPG from Wiggins, 17 from Klay, 13.2 from Draymond along with defensive support.

Though LeBron won the Finals both of those years, he still didn’t have an additional few players consistently averaging double digits per game like Steph did with Klay and Draymond. As I mentioned earlier, LeBron’s 2013 Finals win was the closest thing to Steph’s reality as he’d ever be. In 2013, LeBron had four other players averaging double-digit games on top of his 25.3 PPG. In his nine other Finals appearances, he has not gotten the same luxury.

Steph has never had to be his own shooting, blocking, defense, and every other position on the court. He’s a shooter, and he’s pretty darn good at it. In fact, he’s the best at it. But when we’re talking about a player, that’s LeBron. He plays defense, he hits 3s, he blocks, he steals, he dunks, he assists, and there were even times he coached in 2016 alongside Tyronn Lue. This is not to say that Steph will never catch LeBron, just like it’s not to say that LeBron won’t be better than Jordan when it’s all said and done. But in the here and now, it’s not close. And the career projections simulated for you aren’t either.

So, before we start trying to make a case for Curry vs. The King, look at the stats, the squads and consistent coaching, and tell me if there’s still a case to make…