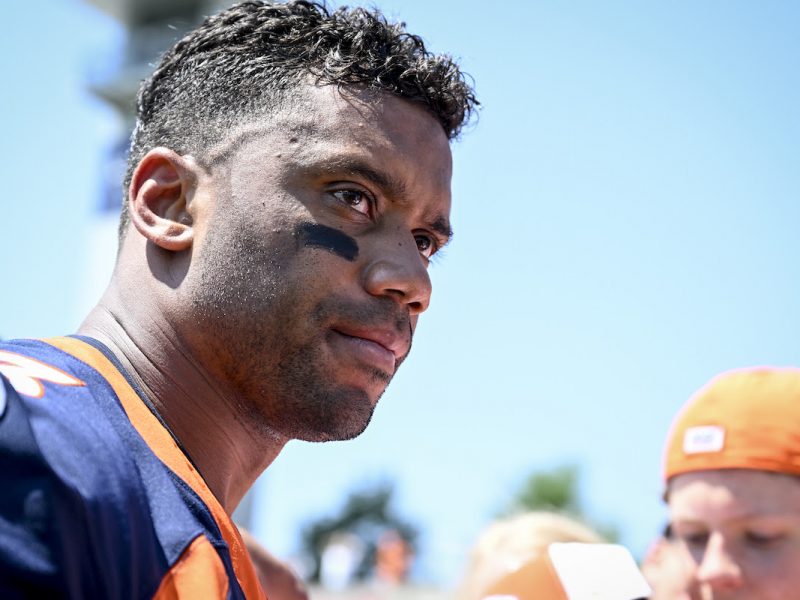 Russell Wilson Has Accomplish Plenty, But His Next Climb Could Take Him to New Heights

Russell Wilson’s offseason trade had major implications for everyone involved. The Seahawks lost their franchise piece, but the Broncos have a veteran QB for the first time in seven years. What does it mean for Russell Wilson’s fantasy value? More importantly, what might it mean to his legacy? We’ll break all of that down before he ascends into his new role, but first, let’s take a glance at Wilson’s underdog career.

Everyone knows that Wilson is one of the best quarterbacks in the NFL, and he has been for years. He’s a great fantasy quarterback and an even better franchise quarterback, which is exactly what the Broncos need right now. He has 37,059 career passing yards, averaging between 3,113 and 4,219 per season. He has 292 career touchdowns. He has been named to nine Pro Bowls and he’s one of four quarterbacks in NFL history with a career passer rating over 100. He also holds the record for most wins by an NFL quarterback through his first nine seasons with 98.

However, there is one thing lacking from Wilson’s career. Though he led the Seahawks to back-to-back Super Bowls in 2014 and 2015, he still only has one ring. It’s been seven years since Wilson reached the big game, and now he’ll attempt a fresh start to do it again.

As we know, especially in football, rings do not determine greatness. No matter how great a quarterback is, he needs a solid defense, offensive line, and weapons around him to win a Super Bowl. Though having only one Super Bowl win is not indicative of individual success, it sure doesn’t hurt your resume to have a few more. And who’d blame Russ for wanting a little more hardware in his house? No one.

How will Wilson impact the Broncos season? The Broncos went 7-10 last season with Teddy Bridgewater starting at quarterback and Drew Lock finishing out the last three games of the season. After finishing last in the AFC West last season, the Broncos have plenty of room to improve with Wilson as their quarterback.

Wilson has Courtland Sutton, Jerry Jeudy, and Tim Patrick to ignite his receiving corps. Though none of these receivers are big name NFL stars, they are all talented, which should allow Wilson to spread the ball around. In addition to these wide receivers, the Broncos also have two talented tight ends vying for the start in Albert Okwuegbunam and Greg Dulcich.

The 33-year-old QB is also finally playing on an offense that’s going to “let Russ cook,” which is good for his fantasy value, too. New head coach Nathaniel Hackett has a more aggressive coaching style, with an emphasis on the offense.

There is no doubt that the Broncos will improve with Russell Wilson at quarterback, especially when he’s allowed to play his game (deep throws and aggressive offense). Russ’s talent was partially stifled in Seattle under Pete Carroll because of the playbook and the conservative offense. This season, I think we’ll see a whole new version of Wilson — both in fantasy and reality— now that he’ll finally be allowed to play to his strengths.

The undersized-but-overachieving quarterback has haunted the NFC West for a decade. His next mountain to summit isn’t just a rocky climb, it’s filling the hole at QB for a team that hasn’t had a great signal-caller since Peyton Manning (2015). And who knows? With more freedom offensively, more receivers, and a better run game in his arsenal, he may finally get his first MVP award and take Broncos back to the promised land.

A second Super Bowl with two different teams? Only two players have ever accomplished that feat — Tom Brady and Peyton Manning. Let Russ cook. The results will speak for themselves.