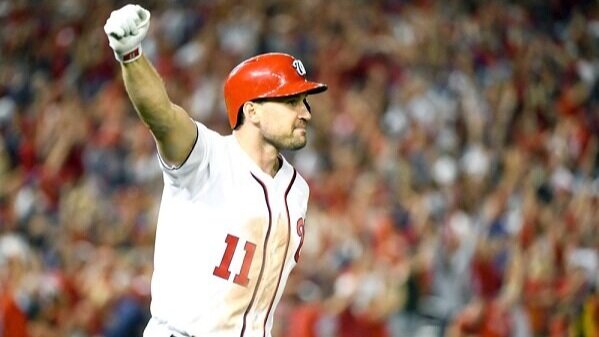 Loyalty in sports is a rarity. We, the fans, usually hold onto it. The worst kind of fans are the ones who don’t. For players, the business of sports often takes over. It’s free agent contracts to the highest bidder. There’s no fault in that, it’s just the way it is. But for Ryan Zimmerman, aka Mr. National, team loyalty made him a World Series champion.

The 35-year-old Nationals’ first basemen has been through it all. It’s been a long ride full of disappointment. So, before we turn the page on the 2019 baseball season, let’s celebrate the Day 1 National.

Zimmerman played high school baseball in Virginia Beach. He traveled three hours northwest to play college baseball for the University of Virginia, and another two hours northeast to D.C. after the Nationals drafted him with the fourth overall pick in 2005.

All things considered, that’s a pretty short ride – a quick road trip up the coast from high school to the pros. But the ride gets longer.

The Nats missed the playoffs with below .500 records in each of their first seven seasons in Washington. Even the Expos had just one playoff appearance in 21 years, and it was a lost series.

In 2012, Zimmerman’s eighth season, the Nats finally made the playoffs. They lost in the NLDS.

Again in 2014, 2016, and 2017, Washington returned to the playoffs and lost in the NLDS. Four playoff appearances and not a single series win. Cue Bryce Harper’s exit, to the rival Philadelphia Phillies no less. Zimmerman, on the other hand, signed a six-year extension back in 2015. He was and always would be Mr. National.

You know the rest of the story after Harper left. The team looked desolate and primed for another rebuild. But somehow, they pulled one of the greatest in-season turnarounds in major league history, and that long ride finally had a destination within reach.

Zimmerman only played 52 games this season due to multiple injuries – and he hit just six home runs – but the veteran leader in the dugout was there to see that long ride through. Zimmerman’s 1,689 career games without playing in the World Series were the most by any active player in the majors.

In Game 1, he hit a home run in his first at-bat (MLB.com). It was the first Nationals homer in a World Series, and it made the difference in a one-run Nationals win (5-4). Oh, and it too was a long ride – 415 feet to dead center.

“I’ll be honest with you, my eyes got a little watery for him. He waited a long time to be in this position, and for him to hit that first home run and put us on the board was awesome.” – Manager Dave Martinez

Man, Zimmy. That was one long Underdog ride. Now, you can go by ‘Mr. World Series Champion’.