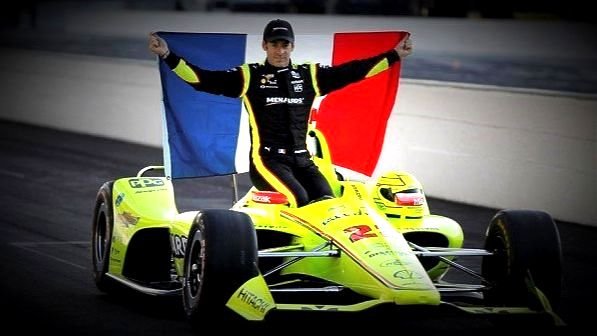 The 35-year-old French driver has seen a lot of left turns in his life, and 800 more are waiting this Sunday at the Indianapolis Motor Speedway.

Drivers like Scott Dixon and James Hinchcliffe have recovered from devastating crashes to climb back into the cockpit, while female drivers like Pippa Mann, Danica Patrick, and others before them have sped past gender stereotypes in a male-dominant sport. You could pick a lot of great speed-demon storylines across NASCAR, Formula 1, and IndyCar, but Simon Pagenaud’s story is so full of twists, turns, and pit stops, it could be its own road course.

Pagenaud was born and raised in the city of Montmorillon, a small town in Western France with a population of 6,000. His parents owned and operated the local grocery store – a franchise of E. LeClerc’s chain of stores across the region – and they expected him to run it one day.

As a teenager, Pagenaud worked the store, managed different departments, and even attended business school before returning to manage it full-time.

That was the path laid out for Pagenaud, but he made a pass, and it wouldn’t be his last.

Things moved slowly at the store – shopping carts, checkout lines, managing inventory – and then-18-year-old Pagenaud didn’t want to slow down. He was mesmerized by Europe’s Formula 1 circuit, and with zero experience, he began his racing career in 2002.

I could rattle off his unexpected ascent from Formula Renault to Eurocup and Champ Car to Le Mans, but we’ll stick to the short version: An 18-year-old kid sped through every series, class, and car with a mixed bag of success and failure at each turn in a decades-long race.

Soon after, a two-year winless drought left Pagenaud contemplating the end. He nearly left IndyCar and returned to Europe, but one race still beckoned; the Indianapolis 500.

Pagenaud’s winless streak was still intact until 12 days ago. He passed Scott Dixon with two laps to go in the Indy Grand Prix on May 11 and recorded his first win in two years. Last weekend, he turned 35 years old and won the pole position at qualifications for the Indianapolis 500, something he’s never done.

In eight appearances in the 500, Pagenaud has earned starting positions of 2nd, 3rd, 5th, and 8th, but he’s never crossed the bricks with a Top-5 finish. Now, one of the most genuine and beloved drivers in the sport – with a personality brighter than his car – is two-for-two this month in Indy, and he’ll finally have the best odds to reach the winner’s circle.

Pagenaud should be easy to spot this Sunday. After all, he traded in a rusty metal shopping cart for the No. 22 Chevy in highlighter yellow (and it’s even brighter at 230 mph).

An Indy 500 win for the Frenchman will signal the end of a long road from checkout counter to checkered flag in the largest race on the planet.