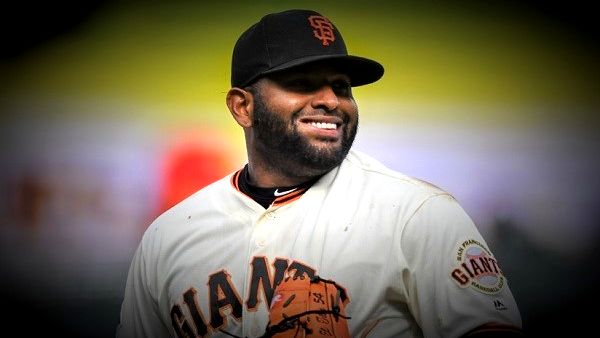 Pablo Sandoval’s career was dead. So, too, was the Giants’ season about a month ago.

When Pablo Sandoval was a kid in Venezuela, he had to practice baseball in an empty garage, taking batting and catching practice by hitting and throwing the ball against the wall. He was 18 when he was discovered by the Giants (he signed a minor league contract in 2004), but he didn’t get called up to the majors until 2008. That’s when the legend of the Kung Fu Panda was born.

The Nickname: Barry Zito dubbed Sandoval the Kung Fu Panda after he jumped over a catcher to tag home plate in his rookie season. Today, his twitter handle is @KFP48. Panda, for short.

The next seven years in San Francisco were accompanied by three World Series titles (2010, 2012, 2014) and a World Series MVP (2012) when he hit .500 in the series and jacked three home runs in a single game against the Tigers and Justin Verlander. Those were the good ol’ days in the Bay area…

In 2015, Sandoval switched coasts to join the Red Sox on a five-year, $95 million deal that ranks on the list of the worst contracts in MLB history. His production fell off a cliff. His health did, too. The Red Sox cut the Panda halfway through his contract and ate the remaining $48 million.

Enter the power of nostalgia. With no market for a 30-year-old, 5-foot-11, 275-pound ghost of the 2012 World Series MVP, the Giants took a chance on their former hero who was available for absolutely nothing.

Fans welcomed back the lovable Panda, and he returned with a new fire. Used primarily as a utility player, Sandoval played third, first, pinch-hit and even stepped in to pitch two perfect innings in the last two seasons. His numbers returned to that of a formidable mid-lineup hitter, and he ranks in the top five in every offensive category for the Giants this season.

In 2017, San Fran lost 98 games. In 2018, they lost 89 games. Through June of this season, they were 36-47 (on pace for another 90-loss season) and dead last in the NL West. With the trade deadline looming and the Giants needing a rebuild, important players like Madison Bumgarner and, yes, Pablo Sandoval, became trade bait. Then, July happened, and it’s still happening.

The Giants reeled off a 16-4 record that included a 9-1 spell this month. They climbed back above .500 on the season, and they’re well in the conversation for a Wild Card bid as the hottest team in baseball.

Halt the trade talks for one more push? The Panda thinks so. He was responsible for a walk-off homer to beat the Cubs on Tuesday night, and he made headlines on Wednesday by backing Bumgarner’s worthiness as a Giant, not a trade asset.

“He’s special. He’s one of the guys you don’t want to give up. Every time he gets on the mound, you want to win for him and do everything you can to support him.” — Sandoval

The Panda carries a lot of weight in the Bay area, and his words do, too. If the Giants can keep their hot streak going against the Padres this weekend, they might sidestep a roster blowup at the trade deadline and make one more push for a postseason run.

Give us Playoff Panda, in a Giants jersey, one more time.