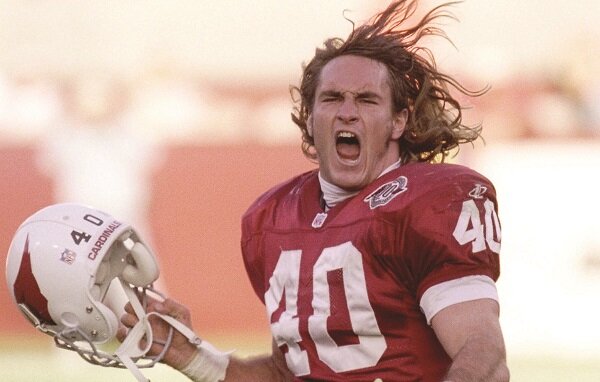 The Intersection of Sports & Service

“Somewhere inside we hear a voice. It leads us in the direction of the person we wish to become. But it is up to us whether or not to follow.” – Pat Tillman

Football is football. For 20-plus Mondays every year, I write bits and pieces from Sunday storylines, records, and highlights about grown men playing a game for millions of dollars. But today, Veterans Day, 15 years after a tragedy, Monday’s football rewind isn’t just about football. It’s an opportunity to honor countless veterans and their sacrifices through an intersection of worlds – sport and service. This is the story of Pat Tillman, an athlete, a soldier, and a hero with the legacy of the ultimate underdog…

Thousands of men and women have dedicated their lives to service, but many of those stories go untold. What makes Tillman’s story unique is the intersection of sport, and the heart of an underdog.

Tillman wasn’t an intimidating football player at first glance, he didn’t field full-ride scholarships to the top football programs in the nation, and he wasn’t a first-round draft pick. He was 5-foot-11 and 200 pounds, but what he lacked in size he made up for in heart.

In California, Tillman led Leland High School to championships as a star linebacker. At Arizona State, he received First-Team Academic All-American honors and led the Sun Devils to an undefeated season and a trip to the Rose Bowl in 1997. The next spring, the Cardinals selected Tillman with their 7th-round pick. They took a chance on a local kid who most teams couldn’t see becoming an NFL star, but Tillman became the starting safety, and he broke the franchise record for tackles (224) in less than three seasons.

“Passion is what makes life interesting, what ignites our soul, fuels our love and carries our friendships, stimulates our intellect, and pushes our limits.” – Pat Tillman

Tillman’s decision to leave the NFL shocked everyone and received national media attention. The choice of service over celebrity stemmed from an understanding beyond patriotism. It came from a feeling of gratitude for what military service had given him. It came from a sense of family…

“He had uncles and grandfathers on both sides who’d fought in World War II and the Korean War, one who’d taken a bullet in his chest, another who’d lost a finger and one who’d been the last to leap out of a plane shot from the sky. On a level deeper than almost any other American, he’d reaped the reward of those sacrifices: the chance his country afforded him to be himself, all of himself.” – Remember His Name (Gary Smith)

His decision inspired hundreds more to follow in his footsteps, including his brother, Kevin. The two enlisted on a three-year term and spent several tours in Iraq and Afghanistan in 2003 and 2004.

Tillman’s unit was ambushed traveling through a canyon in eastern Afghanistan. He provided cover fire for his fellow soldiers to escape, but his heroics resulted in friendly fire that cost Tillman his life.

Pat’s story on the football field and the Army has been told and is well-known, but it is his principles and service that are his true legacy. Pat believed in something bigger than himself and dedicated his life to serving it. The Pat Tillman Foundation is dedicated to honoring his legacy of service, scholarship, humble leadership, and impact.

Pat’s family and friends started the Pat Tillman Foundation to carry forward his legacy by uniting and empowering remarkable military veterans and spouses as the next generation of public and private sector leaders committed to service beyond self. To date, the Pat Tillman Foundation has invested more than $18 million in academic support and named over 635 Tillman Scholars nationwide, providing them with the educational tools and support to reach their fullest potential as leaders, no matter how they choose to serve. As the next generation of leaders, the Tillman Scholars are tackling challenges across national security, healthcare, technology, civil rights, education and more. They believe their best years of service to our country are still ahead of them, and they are committed to strengthening communities at home and around the world.

Take time today to salute our past and present service members. They’re all underdogs with a story to share.