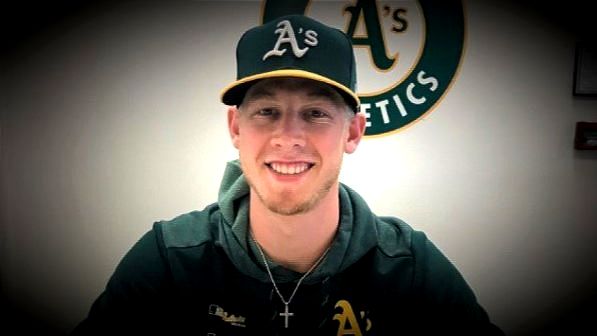 This month, he signed a minor league contract with the Oakland Athletics. No kidding…

Patterson went from running his own landscaping business to one of the most incredible sports stories of 2019. He was in Colorado to celebrate his grandmother’s 80th birthday in July, and his family attended a Rockies game. During a rain delay, Patterson hit the pitching machine and torched the radar gun at 96 mph.

The video went viral, and the A’s signed him to a minor league contract with the Arizona League Athletics Gold a few days later. His journey didn’t start there, though.

Patterson first clocked a pitch at 96 mph using a similar machine at a Nashville Sounds minor league game in August of 2018.

“I was blown away. I honestly thought it was a joke. I thought they just jacked up the gun to make you pay another dollar to throw another ball. I think I threw about five balls and the last one I threw was 96 mph. I blew my own mind, honestly.” – Nathan Patterson

That’s when he decided to hire an agent and relaunch his pursuit of baseball. His training took a backseat when he was hit by a car last winter, but he didn’t give up. The viral video from the July Rockies game was just another nudge to MLB scouts, and that was all it took.

Since officially joining the A’s Arizona League affiliate on August 1, Patterson has made three appearances. He struck out the side in his debut on August 12, and he tossed three scoreless innings with another three Ks in his latest appearance on Sunday (Aug. 25).

Patterson probably won’t get called up to the big leagues anytime soon. He probably makes less money in the minors than the sales job he left, too. No matter how long his minor league stint continues, Nathan Patterson is a hero – a fan who went from the seats to the mound in a matter of days thanks to a cell phone video.

If that’s not the modern-day underdog story, I don’t know what is.