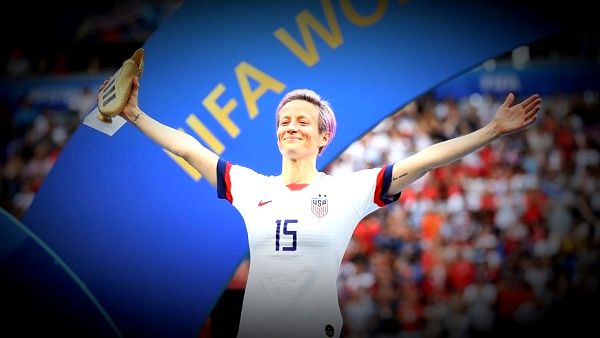 The Summer Story That Changed Sports

The battle began in March, but the war has been a forever struggle.

When the U.S. Women’s National Team filed its gender discrimination lawsuit against the U.S. Soccer Federation on March 11, the timing was vital. With the World Cup on the horizon, the mission was simple: win and get paid.

Our May 16 Underdog special featured Alex Morgan as the face of the fight for 23 USWNT warriors seeking equal pay, but a pink-haired showwoman stole the spotlight.

Bombing headlines and microphones at every step, Megan Rapinoe turned one month in France into a lifetime of opportunities for female athletes everywhere. Game after game and story after story, She ripped apart social injustice in a quest for equality, respect, and a payday.

Whether or not you agree with the polarizing personality of the change agent known simply as ‘Pinoe’, she was the summer’s undisputed headliner. This was her path from Underdog to over-achiever:

The youngest of six, Rapinoe and her twin sister Raechel were inseparable. Their older brother Brian introduced them to soccer at a young age, and they were instantly hooked. But Brian was arrested as a teenager, and other issues with the law have kept him incarcerated for most of his life. He’s never been able to attend any of Rapinoe’s three World Cup appearances, and he was stranded stateside for this summer’s World Cup due to his Community Reentry Program. That heartbreaking connection is one of her many inspirations.

“I have so much respect for her… It’s her utter conviction in the things that she believes in and the stances she takes against injustice in the world. I was her hero, but now – there’s no question – she is mine.” – Brian Rapinoe

With her hero behind bars, Megan and her sister attended Portland together and won the National Championship in 2005. It was in Portland that they began another fight as openly gay athletes who would eventually turn pro.

In 2011, she introduced herself to the world after her first World Cup goal with the USWNT by grabbing the corner flag and singing Springsteen’s “Born in the USA.” That persona and flair made her an instant impressionist.

In 2016, she became the first white athlete to join the Colin Kaepernick movement and kneel for the national anthem.

And now, the 2019 fight shifted to equal pay after March’s lawsuit.

Time after time, she challenged the status quo with reckless abandon. No matter the fight – gender equality, race, or sexual preference – ‘Pinoe pushed for change. And with the eyes of the world on the USWNT as they won each game – inching closer and closer to forcing the hand of the USSF – it was ‘Pinoe who made the most noise.

Sometimes, that noise might have carried more drama, but as the saying goes: “To the victor go the spoils.”

Six goals, the tournament’s two highest awards, and one iconic pose handed the power of change to a pink-haired social warrior who’s been on a path to this moment her entire life.