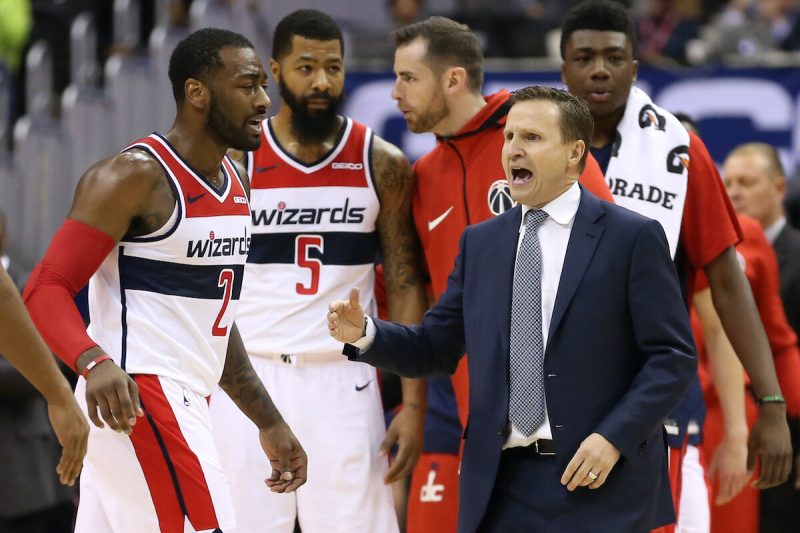 An Interview With The Underdog Head Coach of the Washington Wizards

Scott Brooks took the Oklahoma City Thunder to the NBA Finals in 2012. Kevin Durant was 23 years old. James Harden and Russell Westbrook were 22. They went toe-to-toe with the Miami Heat for five games, but LeBron James and his band of hall of famers took the title.

I remembered watching that series from my college dorm room. I always root for the underdog, and I was rooting for Brooks that year. OKC’s talented young stars ran into one of the biggest super teams in NBA history, but Brooks’ journey to that moment was not to be overlooked. The Sportsletter sat down with the former NBA player and now-Wizards head coach to discuss his rise to the league, his obsession with the game, and facing off against LeBron in the Finals.

The Obsession of an Underdog

“Not one time did I waiver that I wasn’t going to make it to the NBA. I was so obsessive. People told me not to put your eggs in one basket. I said — “Why not? Let’s see where it takes me.” — Scott Brooks

It took him to an NBA championship as a player, and an NBA Finals appearance as a coach. This is Scott Brooks’ underdog obsession:

Brooks was the youngest of seven children in his hometown of French Camp, California. His father left when he was 2 years old, and he’s never seen him since. His mother carried the family and worked every day, refusing to take government assistance. She was “the rock that guided (him)”. The kids worked on weekends, picking walnuts and performing other odd jobs to help their mother pay the bills. His older siblings created a toughness in him that set the stage for what he’d become.

“I was never given anything,” Brooks said. “I fought you for everything I got.”

In 7th grade, he attended a basketball clinic held by East Union High School head coach Bill Stricker. The clinic was free — a rare occasion in a community that wasn’t given much. From that day forward, Brooks’ basketball obsession couldn’t be contained.

“I wanted to be just like (Bill Stricker),” Brooks said. “He just sparked something in me.”

At 5-foot-11 and 165 pounds soaking wet, Brooks faced long odds of the making the NBA. Numerous stops at various college campuses didn’t seem to scream “NBA talent,” at least not right away. From Texas Christian to UCI (University of California Irvine) with a stop in between, Brooks finally had his breakout collegiate season in 1987 — averaging nearly 24 points per game with a pair of 40-point outings as a marksman from 3-point range. His number 12 jersey now hangs in the UCI rafters.

He went undrafted, as most underdogs do, and played two seasons in the Continental Basketball Association before earning a spot in the NBA with the 76ers. He played 10 seasons in the league and won a title with the Houston Rockets and Hakeem Olajuwon in 1994.

“I always tell people; you can take away all the possessions I have, but you can’t take away that I was part of a championship team in 1994… I’ll always have that.”

The journey, however, was far from over. From his college playing days to his first stints as an assistant coach (nearly 20 years), Brooks had played or coached in 16 different locations before arriving in Seattle as an assistant with the Supersonics in 2007. One year later, the team moved to Oklahoma City and Brooks was named the first-ever head coach of the Thunder.

“The thing I loved about that group — they loved being coached.”

Brooks was instrumental in molding a trio of young stars in Kevin Durant, James Harden and Russell Westbrook. In 2012, he took them to the NBA Finals — the first appearance by the franchise since 1996. They lost to Michael Jordan and the Bulls that season. In 2012, the Thunder met LeBron James and the Miami Heat superteam.

Scott Brooks on LeBron James in 2019: “If you guys were not so tired of giving him the MVP, he should have nine of them by now.”

Scott Brooks is one of the NBA’s finest coaches, but his underdog saga often goes untold. A 5-foot-11 guard, a father who left, and a fighter for everything he’s ever earned. He won an NBA title as a player and came within reach as a coach. Now, Brooks is the play caller of the Washington Wizards, and more challenges haven’t stopped him. His star point guard John Wall has dealt with injuries since Brooks’ arrival in D.C.

“I tell (the team) every day; ‘Don’t make an excuse.’ This is one of the best players in the league who hasn’t played in over two seasons, but I love that our guys have never used that as an excuse.”

Underdogs don’t make excuses, and Scott Brooks had plenty at his disposal. This is one NBA head coach determined to make it back to the Finals.