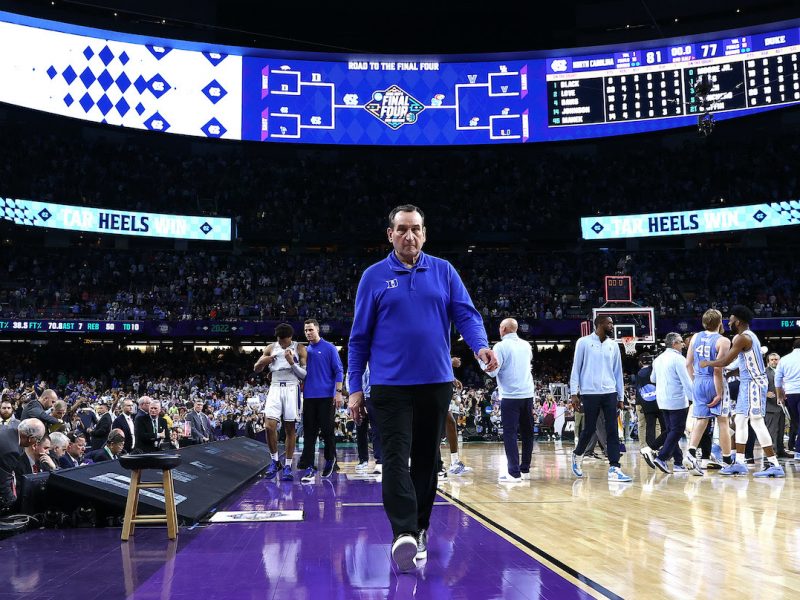 The stage was set for an epic sendoff. Despite a young roster full of question marks, Duke was playing as well as any team in the NCAA Tournament en route to the Final Four. They looked poised and ready to deliver a sixth national championship for head coach Mike Krzyzewski — an appropriate coronation to a 43-year run with the Blue Devils. Instead, North Carolina got in the way… Again.

It was March 5 when Carolina spoiled Coach K’s senior night at Cameron Indoor. Exactly four weeks later, they ended his career in the biggest matchup since the rivalry began.

It’s hard to say K’s farewell season was anything but a success. It most certainly was. Taking a unique Duke lineup with talent and youth all the way to his 13th Final Four was quite the feat. But with a national championship within reach, I couldn’t help but root for Coach K’s last dance to end the same way it did when I met him — One Shining Moment.

I worked the Final Four in 2015 when Duke, Kentucky, Wisconsin and Michigan State made the trip to Indianapolis. There were four iconic coaches in the final weekend that year, but one walked around Lucas Oil Stadium with gravitas greater than any superstar I’ve ever met. There were players who were popular, coaches who were legends and even media celebrities who made you want to stop and take pictures. Meeting Coach K was more like an out-of-body experience.

His polite calmness was countered by a ferocity that I could feel was the backbone of his team’s year-to-year success. The other coaches in that Final Four were all great, but K’s dignified poise on the biggest stage made him seem unshakable.

Four teams entered, one team was left standing. I stood at the bottom of a ladder on the south end of the court following the conclusion of the national championship. Coach K climbed that ladder to cut down the net for his fifth title. Being in the presence of basketball royalty is humbling, and Coach K was college basketball’s king on the throne. He always will be.

Seven years later, I filled out a bracket for the 2022 NCAA Tournament, and I picked a team I’ve never rooted for to win it all — Duke.

Game after game, the last dance for college basketball’s greatest coach began to catch momentum. That young, untested roster started to look like veterans. A trip to the Final Four and a date with Carolina — for revenge? — felt like it was written in the stars. This would be how Krzyzewski ends it… A takedown of the Tar Heels followed by a sixth championship.

I doubt I was alone in rooting for that storybook ending. I think a lot of us were.

The final battle between Coach K and Carolina saw the Tar Heels hit big shot after big shot in the waning minutes. Duke missed three free throws in the final minute that might have yielded a different result on the scoreboard. The game was one for the ages, as expected, but it wasn’t meant to be for Krzyzewski. UNC spoiled K’s farewell party once more, but it was Coach K who spoiled college basketball for nearly a half-century.

The greatest college hoops coach of a generation walked off the floor for the final time. You could feel the emotions coming through your television with each step he took. This was actually the end. At the hands of Carolina, no less, making Coach K an even 50-50 in his 100 matchups against UNC over the last 43 years.

“You’re either crying for joy or you’re crying for sorrow, and if you are that means you’ve put everything into it.” — Coach K

Krzyzewski put everything into Duke basketball. A record 1,202 wins, 13 Final Fours and five championships, all with the same institution. Loyalty, respect and dignity, personified.

CBS Sports: Coach K’s Career Ends With Loss to UNC, And We’ll Never See Another Like Him Again