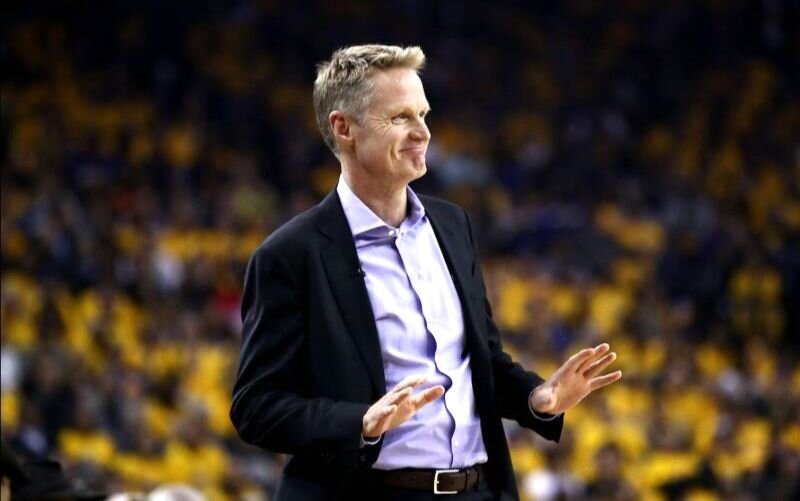 What You Didn’t Know About 8-Time Champion Steve Kerr

Calm within chaos. That’s one leadership trait I learned from my father, a man who produces deep breaths of wisdom in an out-of-breath world of impulse. When the world says “run!”, a leader pauses to ask “where?” and plots a path to the destination.

For Warriors head coach Steve Kerr, calmness in chaos was instilled in him by his father. It’s knowledge of your surroundings and an understanding of how to impact those elements for the better. It made him one of the most decorated basketball champions in the history of the sport — maybe more rings than anyone when it’s finished — but chaos is back in Golden State. And so, too, is the Underdog mentality. This is the story of Steady Steve, one of the most interesting men in sports.

Kerr’s Underdog story is full of chapters that few know. He grew up in Beirut, Lebanon with three siblings. His father, Malcolm, was the president of American University in Beirut.

It was in high school that Kerr moved to the States and developed a love for basketball. He played at Palisades Charter in Los Angeles before earning a scholarship at Arizona to play for legendary coach Lute Olsen. While almost all of Kerr’s “offers” pegged him as a non-scholarship preferred walk-on, Arizona was a bottom-dweller in the Pac-10 looking for hidden talent.

“He could shoot free throws and got straight A’s so we recruited him.” — Arizona Assistant Coach Ken Burmeister

But in January of Kerr’s freshman season, at just 18 years old, tragedy struck when his father was assassinated by Islamic extremists.

“When my dad died, I was 18. I was still, relatively, a kid, just beginning to grow up. And it shaped the way I thought about the world. It disillusioned me in many ways. And everything that’s happened since, I’ve always had the big-picture, global perspective in mind.” — Steve Kerr (NBC Sports Interview)

Kerr finished his freshman season and excelled for the remainder of his years at Arizona before grabbing the attention of NBA scouts, but he was still an undersized guard who many expected to be a role player and a shooter off-the-bench. (Sounds kind of like Steph Curry’s college scouting report)

Instead, Kerr won championships. Again, and again, and again. He joined the Bulls in 1993 with Michael Jordan and Phil Jackson. Three titles later, it was on to San Antonio where Kerr won two more championships alongside Tim Duncan and head coach Gregg Popovich. That proximity to great basketball minds combined with Kerr’s leadership style produced a titan of basketball. Three more titles with the Warriors cemented Kerr’s legacy — eight titles in 25 years as a player and a coach. Only two men have double digits, and their names are Phil Jackson and Bill Russell.

Now, it’s a return to chaos in Golden State. The loss of Kevin Durant and injuries to Steph Curry and Klay Thompson have put the Warriors at rock bottom. They’re 10-36 and last place in the NBA.

For five years, Golden State was the overpowered dynasty. Now, they’re underdogs again, but I can tell you this: Steve Kerr hasn’t won his last championship.