‘That Kid’ in Kevin Durant 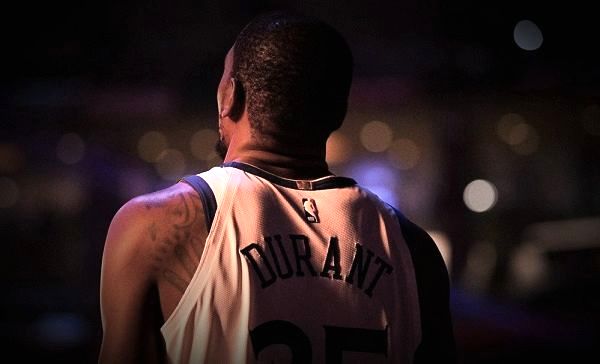 A kid rose from the depths of an impoverished Maryland neighborhood to become a hero. And a hero that kid shall remain.

Not a traitor. Not a villain. Not a quitter. Just a kid, and a warrior.

He’s not a pawn in a chess game of championship chasing, a spoiled athlete with a burner phone, an emotionless drone awaiting his mega-contract in free agency, or whatever tabloid storyline fits the day. That kid came from nothing, only loved basketball, and never let anything get in his way.

When that kid’s childhood home of 5,000 needed hope, he provided. He sprouted from the streets of Seat Pleasant, east of Washington D.C. where few things grow, and many things perish. And that kid gives back to his community – in time, not just money – more than many of us ever will.

That kid watched his mother support four children on her own, work multiple jobs, and sacrifice everything for her son to become a man, a hero, and a superstar, but I still see a kid who just loves basketball.

That kid won the MVP in 2014. He cried, as kids do, and shared a mother-son moment with the world thanks to four iconic words; “You the real MVP.”

That kid won scoring titles, made Finals appearances, and balled with reckless abandon for nine seasons with the team that drafted him. Yep, nine years of loyalty. Remember that.

He stayed out of trouble off the court, and his only fault was that he cared about basketball – and winning – way too much.

That’s when that kid joined Golden State a few months after they won 73 games – an NBA record – and completely shattered the parity in the NBA. In an instant, he became a villain, a traitor, and a quitter. At least that’s what everyone said.

What he really became was a champion, twice, with a Finals MVP. Just a kid with a lifelong dream going after what he wanted, and what he wanted was everything.

So I ask you, wouldn’t you do the same?

That kid entered his final season under contract with the Warriors this year. A supermax deal worth $221 million was a guarantee coming this summer, and in the largest NBA free agent market of all time, that kid was the biggest fish to catch.

With his team on the brink of elimination, that kid took everyone’s best shot – the villain, the traitor, the quitter – and shut them up. They said he was playing it safe to wait for his payout? Not a chance. Kids chasing dreams don’t play it safe.

Fifteen minutes into his Game 5 return, that kid popped his Achilles, and the world went dark. Millions of dollars and potentially an entire NBA season – in his prime at the age of 30 – instantly evaporated.

So, go ahead. Hate the man who made a selfish business decision in 2016. That’s what us grown-ups do sometimes.

But that kid? Nah. That kid loves basketball, family, his teammates, and his dreams. There’s no “I” in that kid… it’s just KD.