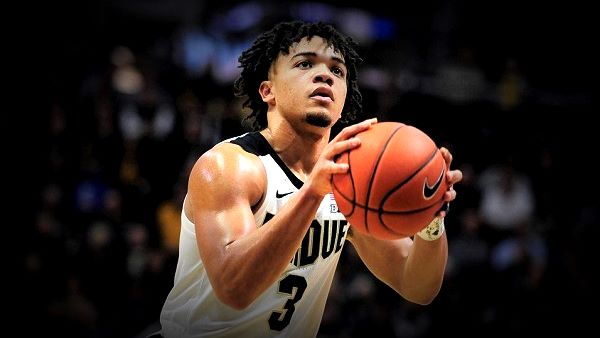 Carsen Edwards is having one of the best NCAA Tournaments of all time, and he’s not done yet.

It’s the first thing the coaching staff noticed when they went to recruit a six-foot-nothing sparkplug from Texas. His knees looked like they were scared of each other, but his game wasn’t afraid of anything.

Carsen Edwards is used to hearing it from opposing fans, especially in high school. It’s a weird thing to make fun of, but kids can be ruthless.

That was Edwards’ favorite. His parents even gave him a hard time, saying he might be taller and better if he had those extra inches from a pair of straight legs. It doesn’t bother Edwards.

The bowlegged Boilermaker always had a chip on his shoulder. That’s what happens when you’re small, and we’ve seen that story before in the NCAA Tournament… Barely six-feet tall, captaining a hot 3-seed — déjà vu. But we’ll get to that in a minute.

Edwards got a few college offers in his home state of Texas, and he spurned them all for the one Big Ten program who traveled to find him, but he had to be patient.

His freshman year was an introduction to the Big Ten, but his game was still hidden behind a group of Purdue veterans who had two years left to write their own legacy. Head coach Matt Painter and the Purdue faithful all knew what Edwards could become; a tourney-wrecker capable of dropping 40 and taking over a game at any moment, but it wasn’t his role. Not yet. Not then.

Back-to-back Sweet 16s in 2017 and 2018 were nice, but that was the end of the road for Purdue. Now, the Boilers are back again for the third straight time. Edwards’ role has changed, and the buckets are coming in bunches.

At 34 points per game, Edwards already has a top-ten scoring average in NCAA Tournament history. He’ll stay on the list with 33 or more in tonight’s game. He’s on pace for the most points in a single NCAA Tournament, ever, if Purdue can reach the Final Four.

“I had Tennessee in my original bracket, but Carsen Edwards is having a Kemba Walker kind of tournament. Purdue convinced me.” – ESPN’s Seth Greenberg

Ah, the déjà vu: a six-foot junior guard leading a red-hot 3-seed with the fearless pursuit of a tournament takeover, just like Kemba Walker.

Despite Purdue’s thick almanac of basketball history, the Boilers have never had a guard like Edwards. That history includes the most Big Ten titles – not Michigan State or Indiana – and 30 NCAA Tournament appearances in 50 years. Yet, just two Final Fours (1969 and 1980) and zero National Championships.