The Fight in the Dawg 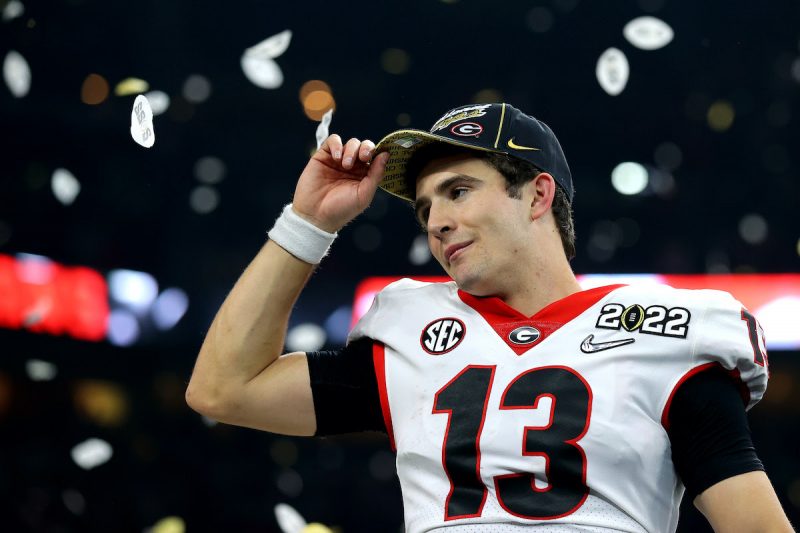 Monday night’s College Football Playoff National Championship was a nail-biter until the final 10 minutes. Enter former walk-on and undersized Georgia quarterback, Stetson Bennett IV, who proved the sports ideology we all know to be true: It’s not about the size of the dog in the fight, but the size of the fight in the Dawg.

Listed at 5-foot-11 and 190 pounds, Bennett IV was never supposed to be on that stage. But the dreams of a Georgia kid came true as the hometown hero delivered UGA its first championship since 1980.

A lifelong UGA fan, Bennett IV grew up in southern Georgia donning a Bulldogs jersey and attending games at Athens. He raced around the yard at 3 years old, tossing a football and telling his father, Stetson Bennett III, that he would someday lead Georgia to a national title.

At Pierce County High School, Bennett IV led his team to three straight state playoff appearances, throwing for nearly 4,000 yards and scoring 40 touchdowns in his senior season. Despite his stats and winning resume, the undersized passer received just three minor college offers. He passed on all of them and chose UGA — his dream school — as a preferred walk-on. But things didn’t go smoothly.

In his freshman year, Bennett IV redshirted and accepted his role as the scout team quarterback in 2017. In 2018, he transferred to Jones College — a junior college in Mississippi — just to get playing time before transferring back to UGA in 2019.

Once he made the official roster, he was buried at the bottom of the depth chart. But in 2020, Bennett IV took the starting job from J.T. Daniels — a five-star recruit who transferred in from USC — and never looked back.

By the start of the 2021 season, the little-known quarterback grabbed the reigns of UGA and orchestrated a perfect 13-0 regular season before the Dawgs gave up 41 points to Alabama in the SEC Championship. It was Georgia’s seventh straight loss to the Crimson Tide dating back to 2007. Revenge would come 37 days later…

The Bulldogs were historically known for their defense and run game, and that was true throughout the 2021 season with Bennett IV acting as the leader and game manager. But in the 4th quarter of the CFP National Championship, head-to-head with the Heisman Trophy winner, Alabama QB Bryce Young, it was Bennett IV who played hero after a crucial fumble nearly cost UGA the title.

In the most clutch moments prior to Georgia’s greatest achievement in 41 years, Bennett IV was downright perfect. He went 4-for-4 for 83 yards and 2 TDs in his final two drives to flip the game from 18-13, ‘Bama, to 26-18, Georgia. A pick-six sealed it in the final minute, and Bennett IV — the lifelong Dawgs fan — let the waterworks flow.

“I just knew there was going to be no way we let a turnover like that stop us from winning the National Championship,” Bennett IV said. “I wasn’t going to be the reason we lost.”

With tears in his eyes and an abundance of sideline hugs, America’s newest underdog won the hearts of football fans everywhere as the latest David to defeat the Goliath from Tuscaloosa.

Put It In Perspective

Stetson Bennett IV is projected as a Day 3 pick or an undrafted free agent. Regardless of his career at the next level, he’ll always be remembered as a National Champion and UGA legend… The Dawg who won the biggest fight.