The Holder of Courage 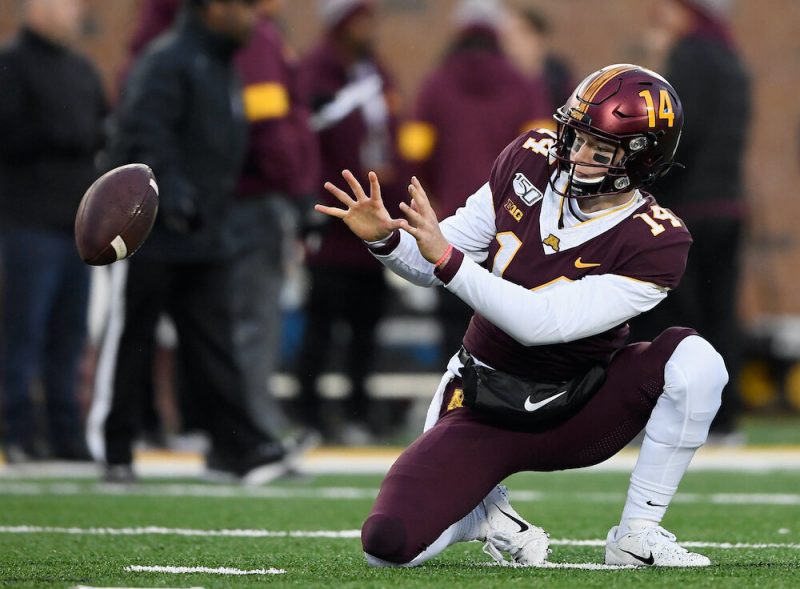 The placeholder is an odd position in football. It’s a minor role with major pressure. An insignificant skillset with significant implications. Do your job and no one knows your name. Fumble the hold, and become the scapegoat. The hold can be, and often is, the difference between winning and losing a close game.

For Minnesota sophomore Casey O’Brien, that split second is brief, but beautiful. After all, beauty is in the eye of the beholder.

As a teenager, Casey played quarterback at nearby Cretin-Derham Hall High School, just five miles from the Minnesota campus. He was diagnosed with bone cancer (osteosarcoma) as a 13-year-old, and his story was known throughout the Minneapolis-St. Paul area.

With the support of teammates and two cities to rally behind him, that young quarterback beat cancer. Once. Twice. Three times. Even after doctors forbid him from playing quarterback, Minnesota head coach P.J. Fleck welcomed Casey as a walk-on at a different position — placeholder.

That was 2017, and Casey’s dream of playing for Minnesota would become a reality in a different way. He wasn’t a quarterback, but he was still taking snaps.

Cancer returned for a fourth time in 2017, and Casey was forced to redshirt. Over a five-year stint, Casey had 14 surgeries, countless chemotherapy treatments, and more than 200 days in and out of hospitals by the age of 19. Football was an afterthought.

Yet, as all underdogs do, Casey continued to fight. He beat cancer for the fourth time this year, and he returned to the Minnesota sideline earlier this fall.

“When you think courage, you think Casey O’Brien… Nobody can ever take away that he played college football in the Big Ten.” — P.J. Fleck, Minnesota Head Coach

On October 21, the Gophers were handing a lopsided defeat to Rutgers when Casey entered the game for a field goal attempt.

The snap. A hold for the ages. The kick.

Casey held three kicks in that game. All makes. He continued to hold kicks in situational field goal attempts the rest of the season, and the Gophers were 100% on Casey-held kicks in 2019.

He would continue to make headlines throughout the season, becoming an inspirational bond that galvanized a team en route to history… A 10-2 record. The best Minnesota football season in 114 years (1905).

Those Casey stories, headlines, and inspiration carried all the way to the College Football Awards Ceremony late last week. He was named the winner of the Disney Spirit Award for the most inspirational player in college football. The placeholder — with playing time that lasts for fractions of a second — used his story to make an impact that would last forever.