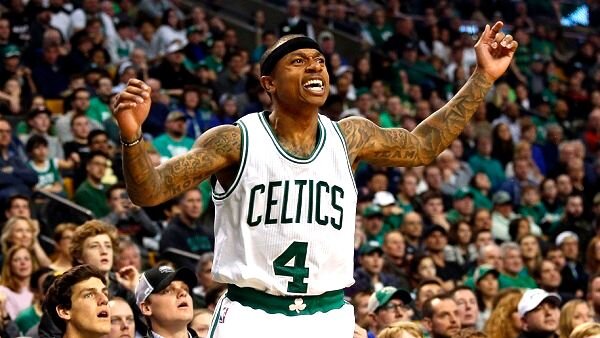 James Thomas was a lifelong Lakers fan. In the spring of 1989, he made a friendly wager on the NBA Finals with a close friend – if the Pistons beat the Lakers, Thomas had to name his son Isiah (Thomas) after the Pistons’ legend.

Detroit swept Los Angeles in four games. Isiah’s mother consented to the name as long as it followed the biblical spelling, “Isaiah”. A small change, but “small” would play a big role in Isaiah’s life.

It took all four years of high school before IT’s growth spurts reached the mountaintop at 5-foot-8. He was lighting the high school competition on fire in the state of Washington, but his grades suffered. After repeating his senior year in order to graduate, he accepted a scholarship at Washington, one of the few major programs that would take a flyer on an undersized, trigger-happy guard.

He scorched the Pac-12 and was named First-Team All-Conference in all three seasons before declaring for the NBA Draft and finding another bump in the road. The Sacramento Kings took him with the 60th and final pick in 2011, but IT made the most of an opportunity.

It took three seasons before the little guy rose to the spotlight. In 2014, he erupted for two 38-point games in one week and followed it up with his first triple-double at the NBA level. The NBA’s next little-big-guy had arrived.

Spud Webb. Damon Stoudemire. Earl Boykins. Nate Robinson. Calvin Murphy. Roughly 10 NBA players have ever held multi-year careers despite being 5-foot-9 or shorter, and those five names were the few we remember. Webb won the Dunk Contest and Murphy resides as the NBA’s shortest inductee in the Hall of Fame, but IT has better career averages (points and assists) than both.

His NBA ascent came like a dunk by a 5-foot-8 guard – suddenly and with a vengeance. In less than a year, IT was acquired by the Phoenix Suns and traded to the Boston Celtics where he turned into an MVP candidate and led Boston to three straight playoff appearances. Then, another speed bump.

On April 15, 2017, IT’s younger sister died in a car accident one day before Game 1 of a playoff series against the Bulls. IT played in Game 1, and he scored a game-high 33 points in one of the most inspiring nights on an NBA court.

The challenges never stopped coming for the little guy. After becoming the face of the Celtics, Boston traded him to the Cavaliers for Kyrie Irving. Upon his arrival, he failed a physical and discovered he’d been playing with a hip injury that would derail his season in Cleveland. IT was never the same…

He went from the Cavs to the Lakers, to the Nuggets, and finally, to the Wizards. For the last few years, the league – and the world – quickly forgot about its best little-big-guy story. Until now.

At 30 years old, IT was an afterthought. He didn’t play in the first two games of the season, but after seeing the court for three straight games – 16 points, 17 points, and 16 points – IT became a starting point guard once more. He’d traveled to seven NBA teams in as many seasons just to reclaim a starting spot for a struggling team. Then, Wednesday night happened…

The Wizards traveled to Boston where Thomas received one of the great “welcome backs” in recent memory. The Celtics fans didn’t forget the little-big-guy who stepped on the court and led them to victory one day after losing his sister. They would also not forget last night – 18 points, 7 assists, and an inspiring head-to-head battle against Kemba Walker that proved one thing…

You never forget the Underdog. IT is making sure of it.