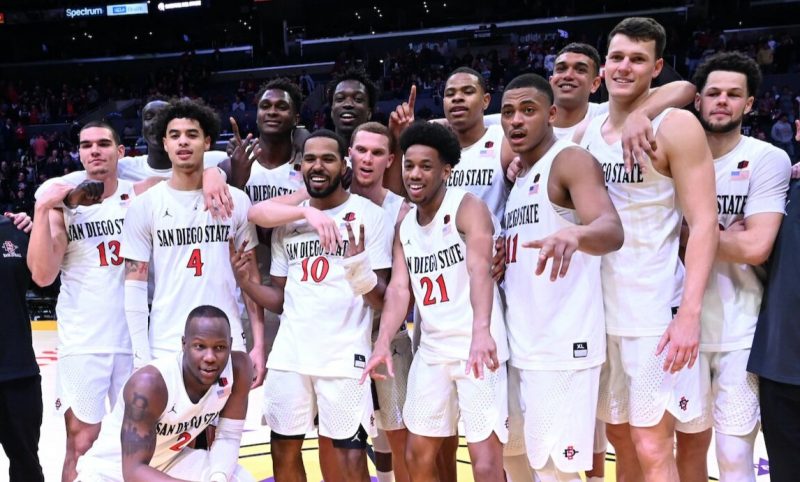 In December of the 2018-19 season, San Diego State was 13-0 alongside Gonzaga as one of the last remaining unbeaten teams in college basketball. By the 2019 NCAA Tournament, they were 21-11 and heading to the NIT. No one saw this coming…

The 4th-ranked Aztecs ripped off a second-half run to bury New Mexico last night (82-59) and they’re now 25-0. They also ripped off the nets as the regular-season Mountain West champions. The last remaining unbeaten team in college basketball has a story to tell.

30 Years in the Making

When legendary SDSU head coach Steve Fisher retired in 2017, he took with him six Mountain West regular season titles and six NCAA Tournament berths. His longtime assistant Brian Dutcher replaced him, and he’s got the Aztecs on the brink of history just three years later. But there’s more.

Thirty years ago, Dutcher was an assistant for Fisher on the 1989 Michigan team. It was Fisher’s first season at the helm. Glen Rice and the Wolverines won the National Championship by one point in overtime against Seton Hall (80-79).

Why is that important? Dutcher has a championship. More than Baylor head coach Scott Drew (Ranked 1st). More than Gonzaga head coach Mark Few (Ranked 2nd). Just as many as Kansas head coach Bill Self (Ranked 3rd). Yes, Dutcher was an assistant, but he’s been there before.

After the Aztecs celebrated their regular-season conference championship last night, they set their sights on the next challenge.

“We’ve got to try to win them all. It won’t be easy… Four really hard games to go, but now that we have the title, we have to have another goal, and that goal has to be to have a perfect season.” — Head Coach Brian Dutcher

With four games left before the Mountain West Conference Tournament, SDSU can enter the postseason at 29-0. A sweep in the conference tourney would make them 32-0 to tee up one historic run at March…

Only four programs in history have ever completed a perfect season and capped it off with a National Championship, including four different occasions by UCLA, but it hasn’t happened in 44 years!

SDSU’s journey to the Final Four is still cloudy based on Mountain West teams’ success (or failure) in NCAA Tournaments past — they’re the third-worst conference in NCAA Tourney play over the last decade. But the Aztecs start a group of juniors and seniors fueled by last season’s failure.

More than 30 years after Dutcher held a clipboard in a title game, he and his players can become legendary — just like the coach who recruited them all.